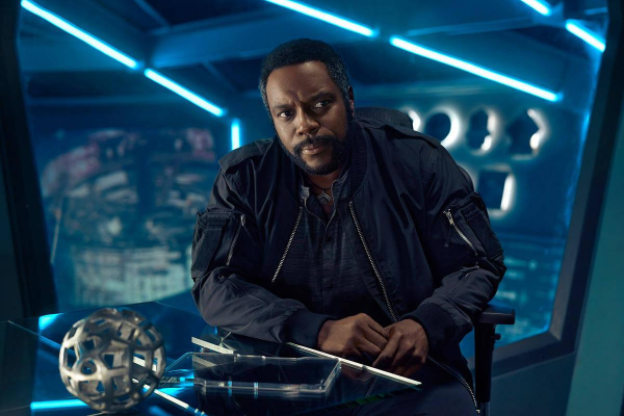 Everything is happening on Fred Johnson’s Tycho Station.

The third episode of The Expanse, titled “Static,” takes a step back from the action that defined last week’s premiere and focused on world building. We see more of Fred Johnson’s space station (Tycho), get additional details on the space Mormons that were introduced last season, and watched how Holden and Johnson dealt with Miller killing the lead proto-molecule scientist, Dresden. This episode focused on world building and is no doubt laying down the groundwork for conflict packed future episodes.

Earth is just asking for trouble in this episode. In response to Mars blowing up Phoebe Station in the season premiere last week, Earth fires off some heavy-duty missiles and destroys one of Mars’ moons; Deimos. The attack kills 17 people and the absence of the small moon in the Martian sky serves as a reminder that Earth isn’t to be trifled with. The Martians are pissed, and as Bobbie Draper and her loyal marines watch the news about the attacks, there’s some anger directed towards her team’s Earther immigrant. As frustrated and angry as Draper is, she nips the potential altercation in the bud and commands the team to suit up to train, because as she puts it, war is coming. That’s basically what the Martians are up to this episode; training in their mech suits and trying not to terrorize the squad’s Earther immigrant. Some Martian-ish scuffles ensure, and by the end of the episode, once they’ve all bonded over possible war, Bobbie and her squad get assigned to Ganymede Station to guard the Martian food supply. The Martian Marines are not happy about this, suggesting that there could be possible mutiny on the horizon.

Chrisjen Avasarala is concerned about the Martian Marines, especially with Earth’s decision to destroy Deimos. She talks with UN Undersecretary Sadavir Errinwright about the possible repercussions of the government’s actions and is met with a cavalier attitude. He assures her that even though Earth’s military is older and slower than Mars, they have the numbers to not only protect Earth, but to possibly get rid of the Martian problem all together. Chrisjen reminds Errinwright that the Martians aren’t meant to be f@cked with, that they train in one G earth gravity and fly at the speed of war. The Undersecretary is still unconcerned and reminds Chrisjen of her own slogan, which is, “Earth must come first” (sounds familiar, doesn’t it?).

After having this conversation with Errinwright, Chrisjen is motivated more than ever to contact OPA leader Fred Johnson. She checks in with her spy, who by this point had procured a secure line to the alleged terrorist. Chrisjen thanks the spy for his work, ignores his suggestion that she might want to rethink committing treason, and sends a message to Johnson. In her message, she tells him that she wants to work with him to root out the corruption that is throwing the solar system into chaos and asks him to provide any information he might have that could possibly prevent war. When Johnson receives her message, complete with an apology for lying about his involvement with the stealth ships of last season, he is surprised. He contemplates Chrisjen’s motives and is warned by his Second in Command (Ojibwe actress, Cara Gee) that by working with Chrisjen, the Outer Planetary Alliance (OPA) would likely put a hit out on him. He agrees, telling her that his dealings with Chrisjen would have to be between the two of them and no one else.

Back on Tycho Station, the crew of the Rocinante has returned with Johnson and his OPA Belters from the mission to the science station. Alex, Amos, and Naomi take stock of the damage done to their ship while Holden and Johnson deal with the fact that Miller killed the lead researcher of the proto-molecule, Dr. Dresden. Holden is furious with Miller for shooting the scientist and tries to attack him but is thwarted by Naomi (Let’s just call her Captain Nagata already). Johnson tells Miller that his stay on Tycho Station had reached its end and ignores Miller when he asks for his gun back. With nowhere to go, Miller heads to the bar for a drink and sulks until Amos shows up with Miller’s belongings. The two share some drinks and Amos informs Miller that he is no longer welcomed on the Rocinante by the crew or the captain (Holden). Miller seems ok with this fact and ends up bunking with the young belter he bonded with during the mission. While bunking there, Miller is made aware that some of the data streaming out of Eros is playing around Tycho as the background beat of some space techno music.

While Miller stews on his next move, Naomi pays Holden a visit. Their romantic relationship — which came to fruition last episode — is suddenly tension-filled because of slightly different ideological positions; Holden can’t understand why Naomi is o.k. with Miller’s decision to kill Dresden. The romantic mood killed, Naomi ends up checking on the full extent of the damage to the Rocinante with Alex and the OPA Second in Command. While the Rocinante is scheduled for repair, Alex, who feels extreme guilt for not being able to protect 25 men that were killed during the science station mission, spends his time running battle simulations.

Elsewhere on Tycho Station, interrogations are being conducted on the people captured from the science station. The one surviving scientist, Cortazar, has been augmented to lack empathy, remorse, guilt, etc., making it hard to procure information from him. His unwillingness to cooperate makes the interrogations difficult, that is until Amos gives it a shot. Contrary to what one would expect from Amos, he doesn’t use violence to extract intel from Cortazar. Instead, he teases the mad scientist with a colorful description of Julie Mao’s last moments, a narrative that Cortazar sees as data he can analyze. In hopes of getting more information about the proto-molecule for his research, Cortazar starts to cooperate with Holden and Johnson, helping them to understand the nature of the molecule. When they play a data stream coming out of the Eros (the same data stream being played in a mix of space techno across the station), Cortazar understands it. He tells them that the screeches and human sounds found in the data stream belong to the proto-molecule and that it is building something. He also informs them that some of the sounds in the data stream suggest a count-down of sorts.

While the proto-molecule music is making everyone’s head spin, Miller pays a visit to the Mormons on Tycho. The Mormons are waiting for Fred Johnson to complete the construction of their megaship (it’s two kilometers long by half a kilometer wide). They plan to farm in the ship as they make a journey to another star system that is expected to take hundreds of years. After listening to their spiel, Miller leaves the Mormons and finds Johnson fretting about the countdown signal coming out of Eros. Miller informs Johnson that he needs to go to Eros to destroy the proto-molecule. Johnson agrees and asks how they can take out a whole asteroid. Miller looks down at the incomplete Mormon spaceship on the dock below, both men realizing what they must do.