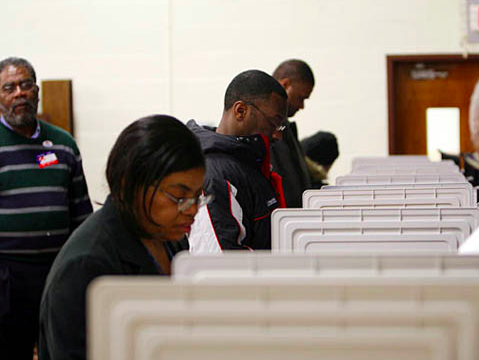 It’s true that if Black voters come out in record numbers we can change our entire legislature and finally have representation that works for us.

According to an NBC report written by Janell Ross:

Longtime political organizer, LaTosha Brown of Black Voters Matter, was in Flint to mobilize Black voters — one stop on an 11-state tour. Brown and her organization, the Black Voters Matter Fund, which she co-founded with political strategist Cliff Albright in November 2016, are doing this work in an unusual way. In the first 20 minutes or so in Flint, before a group of about 20 people, the words “vote,” “voting” and “election” never left Brown’s mouth. Not once.

Democrats should no longer be the antithesis to the Republican party or the lesser of two evils. In 2016, many Black voters and people of color decided to sit the general election out because they felt Democratic candidate Hillary Clinton, did not speak to issues that impact them. Clinton made the mistake of being the anti-Trump candidate and that simply if you don’t vote for her, you could do a lot worse.

Unfortunately, this isn’t going to help Black Americans with student loan debt, criminal justice reform or decreasing the rising costs of their healthcare.

The strategy should be more than just Black voters to come out to vote. Who wants to vote for a candidate who shares little to no concern about your community? It’s time candidates speak directly to issues that adversely impact the lives of Black voters and if a candidate is not doing that, then they’re not going to get that vote.

According to the NBC report about Black Voters Matter’s theory:

Those who gain meaningful influence in their own communities develop a faith in democracy itself. They can become enthusiastic, or at least frequent, participants at every level and create social pressure for others to do the same. It’s an approach that banks on the fact that black citizens’ concerns are often ignored, treated like the fallout of character flaws rather than policy failures.

For more read the full story on NBCNews.com

How Would Black America Vote Today if Malcolm X Were Alive?