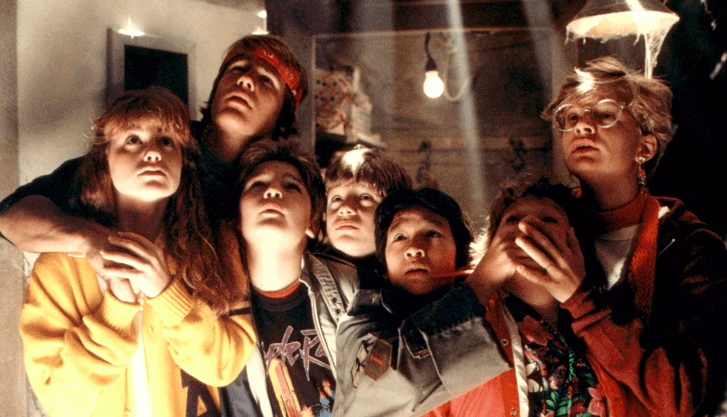 Mikey (Sean Astin) and his older brother Brand (Josh Brolin) are quietly mourning the impending loss of their family home in the “Goon Docks” neighborhood of Astoria, Oregon as a local developer has bought out all the homes in order to expand the city’s country club. Mikey’s crew the Goonies, for whom Richard Donner’s 1985 classic is named, are in similar dire straits as their solid middle-class families are struggling to figure out where they will all go if they can’t counter Mr. Perkins’ (Curt Hanson) offer for their land.

Being an intrepid explorer, Mikey decides to take matters into the Goonies’ own hands and go after the enigmatic “rich stuff” rumored to have left behind in the area by the notorious pirate One-Eyed Willie.

After the crew finds a possible map to Willie’s treasure on the Inferno, armed with nothing but their will, raincoats, and bikes, the group heads out on what will be their last adventure in the Goon Docks if they can’t find the money to save their homes.

For folks who grew up in the 80s, The Goonies is a classic even if it hasn’t aged quite as well as we hoped it might have. There are so many gaping plot holes like: Why hasn’t anyone even started packing if it’s Friday and their homes are being demolished on Monday? How are the homes getting torn down on Monday when Mikey’s dad Mr. Walsh (Keith Walker) hasn’t even signed the closing papers yet? Why do they just watch the Inferno sail out to sea, shouldn’t they be going out there to collect the rich stuff? And more. But still, the film has a time-capsule-esque charm with its quirky score by Dave Grusin that highlights all of the Goonies’ antics perfectly, from playing the bones to finding One-Eyed Willie’s beautifully preserved pirate ship.

I have seen this movie at least a hundred times and I never fail to tear up when the Goonies first lay eyes on the hidden ship. What a moment of pure cinema magic made even more glorious in high definition, and The Goonies’ overarching messages of teamwork and friendship are timeless even if the movie might be dated in other ways.

The one thing that has certainly not dated The Goonies in its 35 years of pop-culture tenure, though, is its dire warning about how capitalist greed is a danger to children, actively putting them in harm’s way.

Before the Goonies break away from Brand and begin their trek toward uncovering One-Eyed Willie’s rich stuff hiding place, a main topic of conversation is their families’ major cash shortage. It makes sense, given they are about to lose their homes. However, it’s disturbing to see a group of such young people taking on the adult role of worrying about money and feeling completely helpless to be able to contribute. They should have been going after One-Eyed Willie’s treasure just for the fun of it, because they’re kids and kids in the 80s were given a much longer leash for their play activities.

Instead, Mikey and his friends put themselves in active danger out of a desperate need to help their families find a huge source of income quickly so they can save their childhood homes.

When the Goonies follow the clues underground and think they’ve discovered Willie’s stash of gold, it turns out to be the wishing well in town.

Heartbroken at having their dream of staying in the Goon Docks potentially smashed, Mouth (Corey Feldman) begins collecting the coins anyway. When Stef (Martha Plimpton) stops him, reminding them these are representative wishes, Mouth replies, “This one right here. This was my dream, my wish. And it didn’t come true. So I’m taking it back. I’m taking them all back.” This is a heavy moment that hits hard when you stop to consider how children internalize adult problems and in doing so their childhood ends early. Thanks a lot, Mr. Perkins, you greedy dick.

As the Goonies race against time to find the means to save their neighborhood, they come across a dysfunctional family of career criminals who add a new level of threat to the children and their safety. The Fratellis, headed by Mama (Anne Ramsay), accidentally find themselves on the hunt for Willie’s treasure just behind the Goonies. Mama Fratelli is a piece of work.

Her all-encompassing desire for money has turned her into a professional thief and cold-blooded killer. To help her amass the wealth she craves, she has physically and verbally abused her sons Jake (Robert Davi) and Francis (Joe Pantoliano) into becoming her accomplices, abuse that has continued well into their adulthood that now serves to control them to do her bidding.

Worse, Mama Fratelli has physically abused her son Sloth (John Matuszak) so horrifically he is now physically, mentally, and emotionally disabled, made even more horrific by the fact that she keeps him chained in a creepy basement. Mama Fratelli’s greed is so consuming that she puts even more children in harm’s way by chasing after the Goonies and almost murdering individual members on several occasions. Her greed feeds her cruelty in a toxic loop that poisons everyone around her.

But The Goonies’ warning about material greed doesn’t stop with Mr. Perkins or the Fratellis. If we stop to consider the pirate culture of One-Eyed Willie’s day, his own desire to amass rich stuff would have also led him to hurt children. Pirates often kidnapped young folks to exploit their menial labor on the work-intensive process of sailing a huge schooner like One-Eyed Willie’s Inferno. Pirates also often helped transport and sell slaves, many of these being children who had been stolen and sold for any number of reasons, not a one of them good. And finally, so as not to reveal the location of his treasure, Willie eventually murdered everyone on board, which would have included said children. He even booby-trapped a huge chunk of his loot so even in the future nobody would be able to walk away with it. That’s some hard-core greed right there. One-Eyed Willie might have been the first Goonie, a great adventurer, but he was no hero. 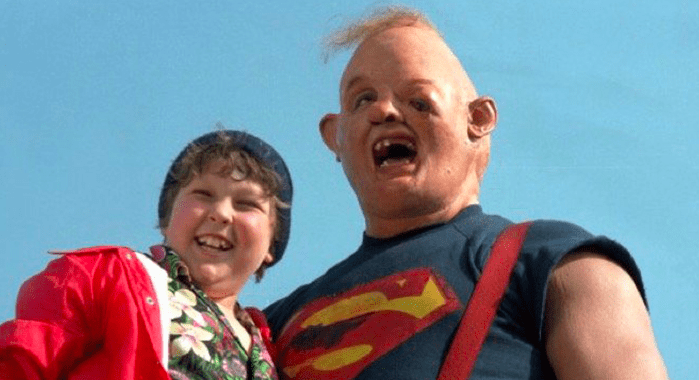 The sad thing is that capitalism as a system is in many ways designed to hurt those at its poorer spectrum, while simultaneously dangling the potential that allowed the Goonies to think there would be a quick fix solution through hidden treasure at all. “I’m sorry, Dad,” Mikey tells his father after they’ve been rescued. “We had our hands on the future and we blew it to save our lives.” Yikes, kid. What Mikey and his friends did — and surviving — proved to be incredibly brave. But this was a bravery prompted by the kind of desperation only capitalist greed leaves in its wake. Capitalism creates problems, and then forces people to use this broken system in order to try solve them. It’s a snake eating its own tail, and it negatively touches everyone in The Goonies with the exception of the richie riches, the Perkins and their ilk.

Yes, The Goonies can be a fun and nostalgic romp. It’s a slice of my childhood and I love it dearly. But at the same time, its anti-capitalist warning is extremely clear and especially when it comes down to the disturbing ways children are affected from the micro to macro levels. At the end of The Goonies, life in the Goon Docks is set to rights and the kids get to stay in their homes. It’s heartwrenching that 35 years later the capitalist greed that sets the Goonies on their adventure has actually only gotten worse. According to The Goonies, we’ve come a long way in the wrong direction.

A Short List of On-Screen Mothers who Abuse and Kill