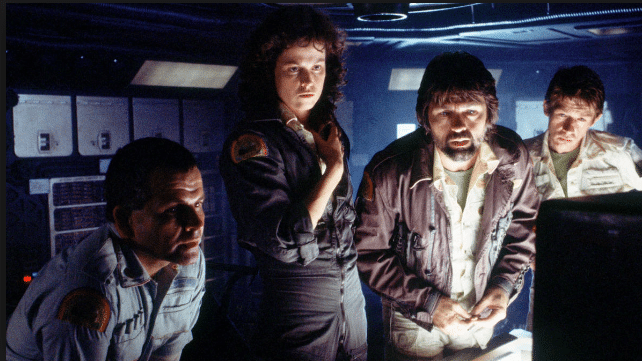 Meet The Nostromo, a commercial spaceship for intergalactic towing services manned by only a crew of seven and an onboard system they call Mother.

On the outside, the Nostromo is an enormous spear thrusting its way through the universe. On the inside, its labyrinthine halls and corridors rely on vaginal and fallopian imagery. The Nostromo’s steampunk forged steel and other metal, bent and curved to look organic per the singular vision of artist H.R. Giger, make the ship a character in Alien of her own right. That’s probably why Ridley Scott first spends such a long time introducing us to her before we even glimpse the humans. 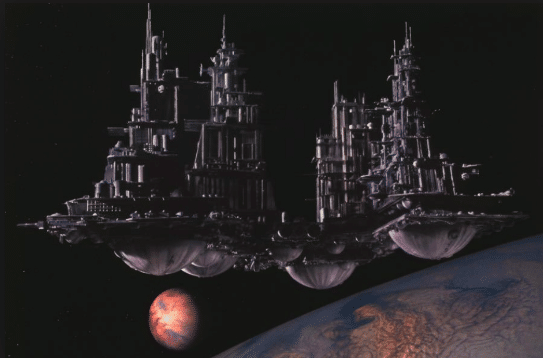 This streamlined crew is safely tucked into their hypersleep pods when they awaken early to what they first assume to be a distress signal somewhere nearby. Halfway to Earth — and ready to get home already — the crew is neither equipped or prepared for a rescue mission. These are outer space salvagers, not military or scientists, with the exception of one science officer on board.

The Nostromo’s mechanics Parker (Yaphet Kotto) and Brett (Harry Dean Stanton) immediately begin griping about whether they will get a bonus for this interruption. Science officer Ash (Ian Holm) points out that it’s in their contract, tucked deep, to participate in any rescue operations that occur during the journey or they forfeit the entirety of their wages. Parker will not let it go that they shouldn’t be getting off course. The first voice of reason that is completely ignored.

The vaginal and fallopian imagery of The Nostromo doesn’t stop there. The spacecraft they uncover on LV-426 is similarly structured but on a far larger scale. An enormous steel uterus. A vagina dentata. While investigating, executive officer Kane (John Hurt) gets infected with a face-hugging parasite that emerges from an egg, while third in command Ripley (Sigourney Weaver) deciphers that the transmission is actually a warning. When Captain Dallas (Tom Skerritt) and navigator Lambert (Veronica Cartwright) bring Kane back to the ship, the second voice of reason in Ripley’s measured tones refuses to let them back on board for fear of contaminating the entire crew. Even though she’s first in command when Dallas and Kane are not on board, Ash overrides her and allows them all back on board.

The slow burn ramps up as the crew discover the parasite has acid for blood and then mysteriously falls off Kane’s face, apparently dead. In a scene that has horrified audiences since 1979, a toothed alien burst from Kane’s impregnated chest in a monstrous birth of unholy proportions. It’s up to the remaining crew to kill the Xenomorph, while being sabotaged by Ash, revealed to be an android working for The Company with express orders to bring the creature back to headquarters. Crew expendable.

“In space, no one can hear you scream,” reads the tagline of Ridley Scott’s epic 1979 sci-fi horror Alien. But here on Earth, we’ve been listening to each other scream during this film for a good forty years. Heck, I’ve seen this film dozens of times over the decades and I still can’t help but shout during certain key parts. Even the ones where I have behind-the-scenes information, like Kane’s alien expulsion. Did you know that John Hurt was the only actor who knew they were actually filming that scene? Scott wanted to get authentic reactions, so he lied and told them they were doing a rehearsal with the cameras moving but off. Veronica Cartwright’s primal scream and pure disgust etched on her face weren’t even acting, even though she would have done an amazing job without being blindsided. Everyone in the cast is a trained stage actor primed for improvisation and remaining in character regardless. And it shows beautifully. The next Alien installment to get this kind of theatre treatment would be David Fincher’s Alien 3 thirteen years later. 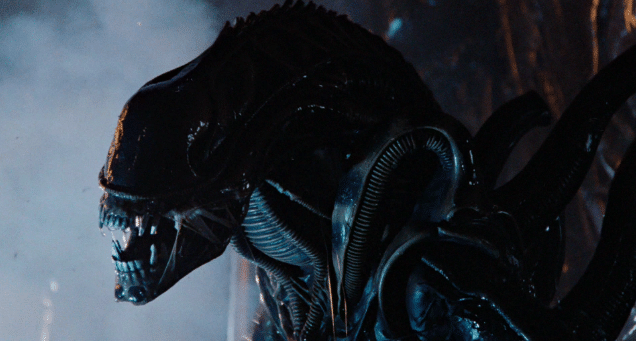 First inspired by and then actually designed by steampunk creator H.R. Giger himself, the Xenomorph is as beautiful as it is deadly. Another example of the vagina dentata that permeates Alien and beyond. How it quickly evolves to match the inner design of the ship is part of the expansive worldbuilding done by Ridley Scott that opens up so many avenues for the franchise. Alien might be the slowest in the series, but all the work it does setting up the company Ripley and crew work for as well as the Xenomorph itself is nothing short of extraordinary. Because of the stellar writing from Alien, subsequent features can skip right into the action and develop on Scott’s meticulous world as ancillary plot points. How Alien so authoritatively establishes their mad world is absolutely a reason this film mostly holds up all these decades later.

Only two things date Alien: Smoking cigarettes on board and the old school computer monitors with its clunky font and interface. But back in the 1980s when computers were not readily accessible to the public, it was a future most of us couldn’t imagine. Especially when the monster showed up and began eating everyone. And as if the acid-blooded Xenomorph wasn’t enough to battle, The Nostromo crew also have to deal with an android who goes off the rails and tries to kill a crew member himself. The scene where Ash tries to choke Ripley with a nudie mag is honestly as terrifying as the alien, especially when placed into context of phallus as weapon of death. *Shudder*

Alien is also notable for being an installment of the horror canon where a Black person isn’t the first to die. Parker is actually one of the last and was so close to making it out. In this aspect, Alien is still ahead of its time all these years later.

Not to mention our favorite final girl Ripley, played with such finesse and nuance by Sigourney Weaver. Ripley’s strength isn’t just in surviving the most terrifying creature known to man, it’s also in her moments of rawness and breakdown. Crying relieves stress. Every time Ripley cries it gives her the inner power to soldier on even though she’s far from a trained soldier in this first installment. Myself being highly sensitive and an open crier when things hurt or battles seem unwinnable, I would often think about Ripley in those moments when people would shame me for being emotional out in the open. Strength can manifest as vulnerability, too. It’s one of the more human aspects of it. And pitting a human woman survivor vs Xenomorph survivor in the final act of Alien is loaded with feminist subtext. 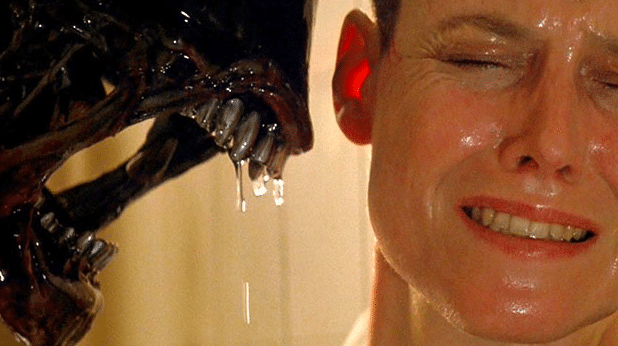 In the 40 years since Alien hit screens, we have had two prequels that predate Alien’s world: Prometheus and Alien: Covenant. I loved watching this original again with those new worlds kicking around my head. I’m one of the rare folks who love the Alien installments almost equally (except for the extra-special place in my heart for openly-feminist fourth film Alien: Resurrection), and it gave me such a new thrill to know so much more about the ship that Dallas, Lambert, and Kane find.

Even if you aren’t a horror or sci-fi fan, you cannot deny the paragon of cinematic mastery that is Alien. From its stellar acting, detailed worldbuilding, design and concept artistry, as well as Ridley Scott’s sensational direction, Alien has been and will always be iconic and foundational not just in American film history, but globally too.

P.S. Watch Captain Marvel again with Jones in mind. What a fantastic hybrid homage to that damned lucky cat who survived one movie longer than every human except Ripley.