Every warrior culture includes the concept of honor amongst their core values. On February 14, Ubisoft released its strategy action game, For Honor. In the game, a natural disaster has befallen and three factions have risen. Spawned on by Apollyon, the female warlord of the Blackstone Legion, the Knights of the Iron Legion, Warborn Vikings, and the Samurai of the Dawn Empire fight to gain dominance. This third-person shooter has the feel of any of the better Lord of the Rings related games, combined with the epic battle approach of the Dynasty Warriors franchise, smattered with the joy of Mortal Kombat. 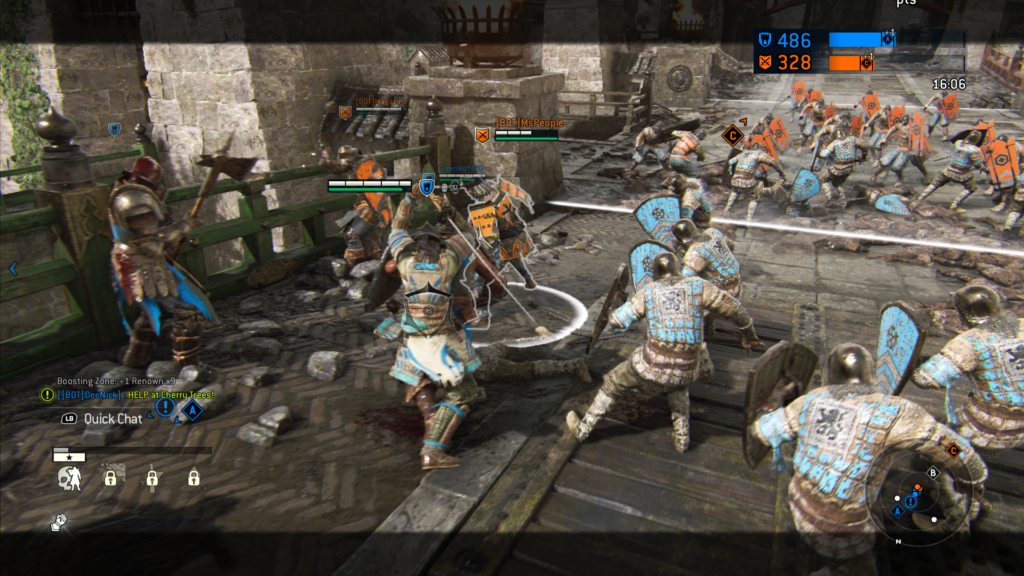 You are allowed to play and develop heroes from all of the factions. Within each faction are four hero types, the Vanguard, the most balanced character, the lithe and lethal Assassins, a Hybrid of those two types and the apt named Heavies. These twelve heroes have different appearances, opportunities for customization, and attacks. Throughout the game, you gain Character Experience; Steel, the in-game currency; while other items are gained post-game rewards known as Loot. Other points are awarded as War assets. The game offers various games modes including a single or cooperative player campaign mode, a 4 versus 4 (4v4) dominion mode, 4v4 skirmish mode, 4v4 elimination mode, 2v2 brawl mode, and a 1 on 1 duel mode. Any of these modes have the ability to have you and others from matchmaking against the AI or all positions filled out by multiplayer matchmaking.  The Faction War is another feature. The Faction War is divided into a 10-week season which is further subdivided into five 2-week rounds. When you first start you are asked to select a faction. The outcome of any multiplayer session results in the awarding of War Assets, which can be allocated to support attacking another faction’s territory or defending your own. The assets determine the outcome of that Season’s faction war and I believe influences some aspects of the campaign mode. 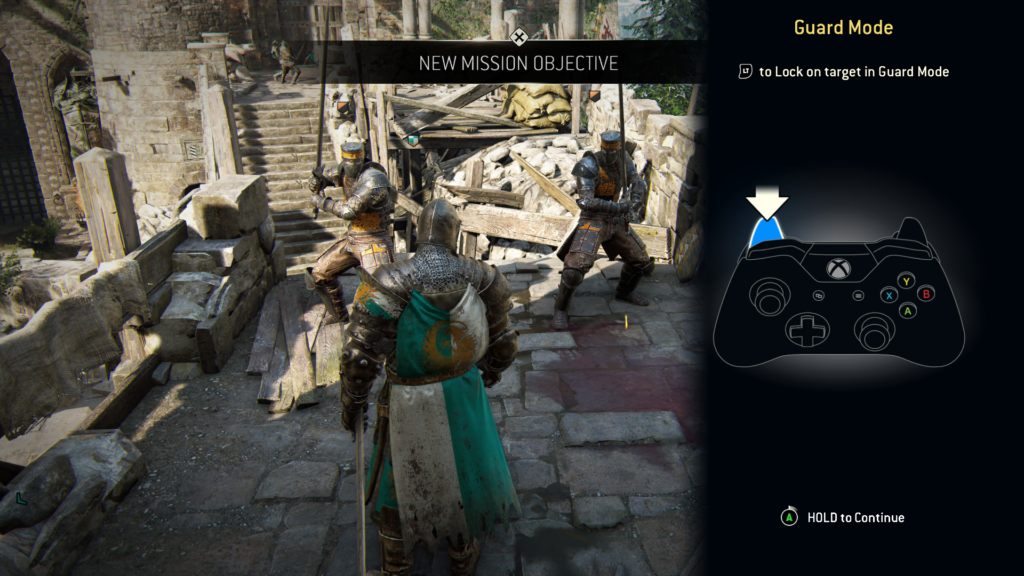 Regardless of your mode preference, start with the tutorial.  On the consoles, the right button and right trigger are your attacks, the left thumb is still movement; however, the most important control is the right thumb. The right thumb is how you guard yourself against an attack. The tutorial walks you through the basic movement, means of attack. I recommend patience and really feel comfortable that you can do what you intend before heading out into multiplayer v multiplayer mode. I started in the Samurai Faction as an assassin, known as the Orochi. 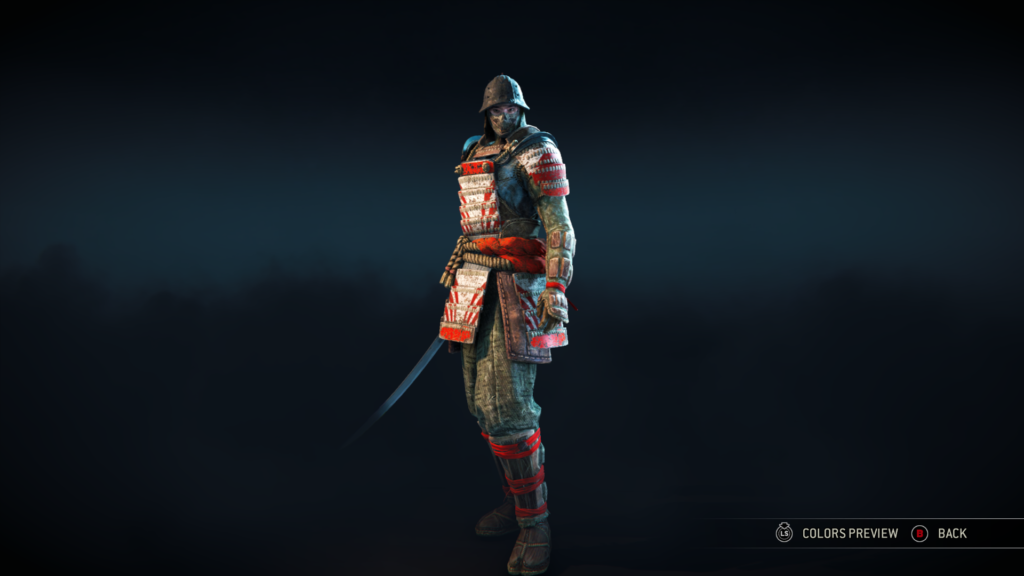 I felt throughout the tutorial that I had a decent mastery of the skills and went into the campaign mode. In the campaign mode, my character were the Knights and I played well enough to defeat the knight at joining the Blackstone Legion. Emboldened by my success I went into the multiplayer v AI mode. I played several different matches, where we won more times than we lost.  It is worth noting that you don’t have unlimited health and cannot strike your way through a match even against the AIs. Still feeling successful, I ventured into a duel against another player, Happy Bunny44848. I mention the gamertag as I, with my gamertag as Bunnehs Sister, enjoyed the idea of a bunny fight. The match started with some tentative movement, circling size up the enemy and then the slaughter began!  Bunny blood everywhere!!!! This is where I discovered the quick chat. When you press the left button, a menu pops up which allows you to do things like ask to be revived, apologize, and congratulate your opponent. I really appreciate this function as I was defeated, match after match, by Happy Bunny, always with a polite good fight quick chat. After a bit, Happy Bunny even started letting me get a swing in here and there and then he would mercifully put me down. There is so much in this game, for most players. You can loan wolf or get your duel on. The AI matchmaking seems to be okay; but there are some issues, as I think that lobby matchmaking could be greatly improved. As in some matches, I was a newbie in lobbies with players that had prestige. 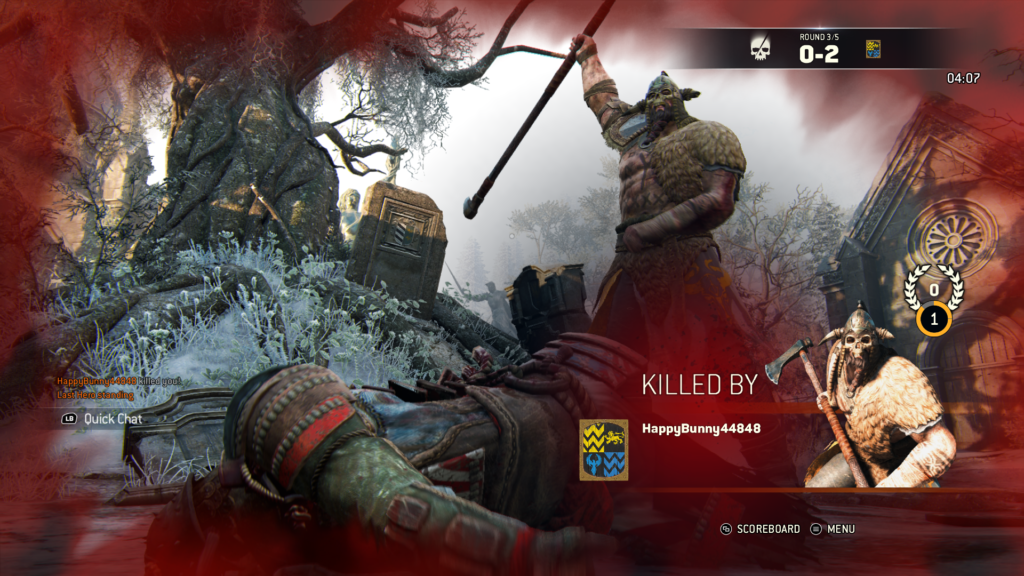 My ineptitude at guarding made playing against even some of the AIs a real chore. At my brother’s recommendation (thanks Bunneh3000), I rented this one before deciding whether to buy, which was a great thing. For me, the controls are more of a challenge than I like, as I am more of a mindless one button one action gamer. However, that is my issue and not the games. I think that this game has epic content on par with the epic scenery and an opportunity for days of joyful gameplay, regardless of your skill level. Although my gameplay had absolutely no honor, Ubisoft’s For Honor has a lot to offer.