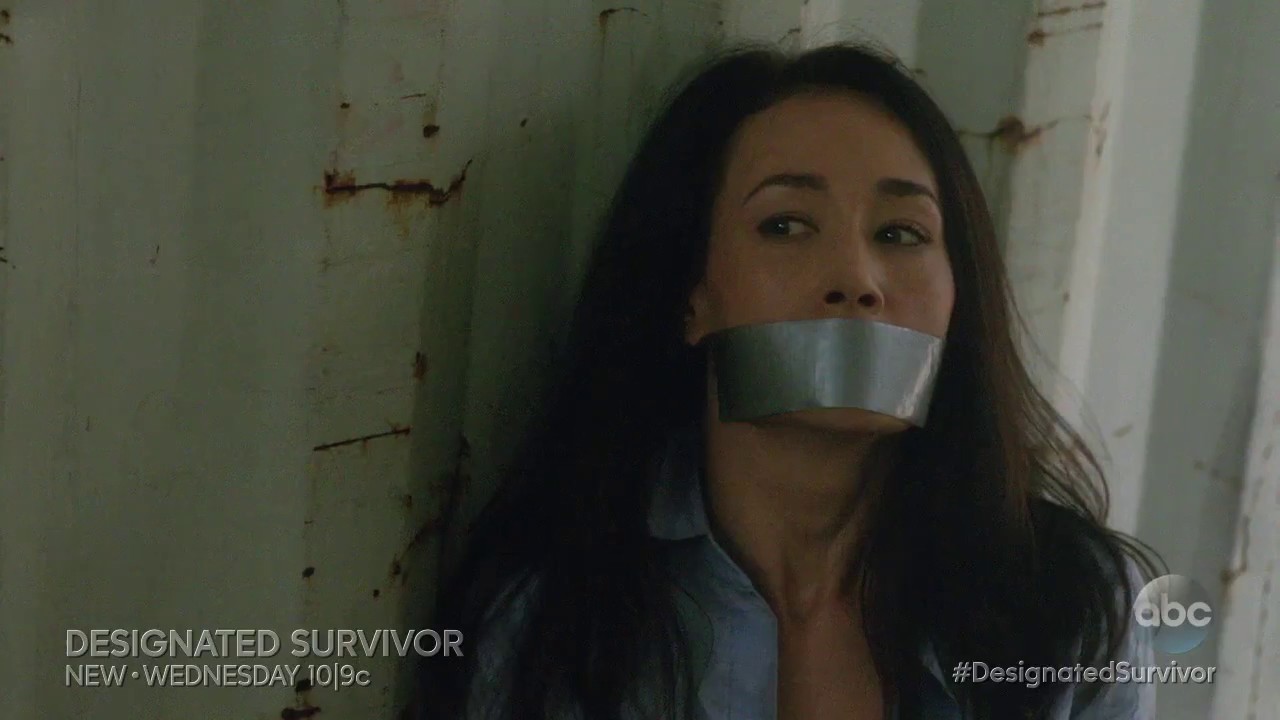 Overall, this episode of Designated Survivor was a very good episode. Am I the only one who is still in disbelief that Hannah got taken? I expected her to come up against someone working against the White House, but not for her to be kidnapped in the blink of an eye. She quickly went from badass FBI agent to codename “package out for delivery”.

This week, we begin with Chuck waiting for more intel from his mystery source. I was wondering who it was and thought it could be Hannah’s right-hand man, John. Who else would be privy to such detailed information about the case? Chuck gets his intel from his source and despite being told not to follow he does anyway. The informant slides away from Chuck and when the camera pans away, we first see a familiar build, then we see the face of Kirkman’s National Security Advisor Whitaker. Damn, Kirkman sure knows how to pick them doesn’t he?

Kimble’s struggles continue and are all too aligned with the real-life political scene. Kimble, an accomplished, educated, confident woman with a proven track record is being disregarded. The new Congress is in and have basically said screw your knowledge and experience — you don’t matter. She goes up against the ethics board and the cards are clearly stacked against her. Aaron asks his cousin for the scoop and it isn’t good news for Kimble. Refusing to go out silently, she decides to do what leave her own way, in exchange for her “last hoorah” via getting the music bill renewed.

Tyler appears again and he gives me such an emo vibe, but at least he has a charitable side. He visits the White House with a music program for public school children. Before the performance, he is getting a little too close to the first lady as they chat and gives her low-key bedroom eyes. I found that creepy and of course Alex was oblivious to it as she vented about trivial family matters. Later the kids all sing a more upbeat version of “Wade In the Water” and I, and some of the actors on camera, teared up anyway. That song stirs the soul and Kirkman too because he made it his person mission to do what he could to get the bill renewed after Tyler informed him it expires next month.

Ross and his “Take America Back” campaign again too close for comfort. He just like a certain leader of the free world ran on the same campaign and garnered the same devotion and support. Ross is a dangerous man; he has money and power and now it’s clear what the plan is. He and the blue terrorism Bible squad want to take over the government and make things great again. We know how this goes and I hope this gets shut down quickly.

Jason comes through in the clutch while staked out in the woods. While using his spy gadgets he gets a ton of information and learns: Hannah has been kidnapped, and their plot to let the FBI stay distracted with the 3 targets from the bomb simulation. Just when it seems Jason is going to get all the answers and leave, he hears a noise. Jason smartly sends his intel (hopefully not to Hannah) and then draws his gun, but it’s just Bambi. However, Bambi failed to let Jason know that Catalan was behind him and Jason falls after catching two bullets to his chest. I screamed at this moment because Jason can’t seem to catch a break.

The show wraps with more of First Lady Alex going on about wanting the kids back in the White House. ::eye roll:: I know she means well but I don’t think she knows when to stop and her choices usually seem to effect the White House. I just need her to go back to Camp David and bake cookies until this is over.

Hannah is tough and refuses to back down. She cleverly waits for her moment, gets her cuffs off using the underwire in her bra. Who said bras were an annoyance? Her food delivery/kidnapper guy comes in, with a syringe that Hannah clearly notices isn’t food. She takes him out and runs out only to discover she is in the middle of the ocean on a cargo ship. WTF?! My heart can’t take this.