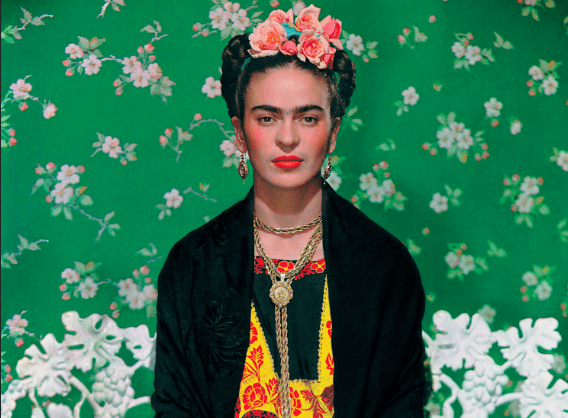 Nearly eighteen years ago, director Julie Taymor released an intriguing biopic called Frida, with actors Salma Hayek playing the famous Mexican artist Frida Kahlo and Alfred Molina as Diego Rivera, a well-known Mexican mural artist. This film received countless nominations worldwide and won two Academy Awards, specifically for Best Makeup and Hairstyling and Best Original Score in 2003. This is to say, Frida Kahlo was a gifted Mexican artist and a political activist, who struggled with severe health issues and has been a significant feminist icon to many cultures that opened doors on homosexuality, and her artistry still shines today.

Taymor’s film Frida portrays Young Kahlo as an open-minded and energetic person who is far from being shy during her schooling days, until one day, the city bus she rides in is involved in a devastating accident. Kahlo is hospitalized and suffering chronic injuries in different areas in her body, which affected her life profoundly. During her lengthy recovery, she painted self-portraits to pass time. Once fully recovered, she sought professional criticism from the one mural artist known in the community, Rivera. Soon, Kahlo joined Rivera with his communist friends in parties and protesting against imperialism during Mexico’s revolution. In a short while, she accepted his hand in marriage.

Rivera’s infidelities began one after another, with Kahlo having affairs as well. The one affair that Kahlo could not tolerate was his with her sister Cristina (Mia Maestro). Kahlo went her own way for a while, until Rivera helped Leon Trotsky (Geoffrey Rush) and his wife gain political asylum. The two couples stayed in Kahlo’s home in Mexico. After Trotsky’s departure, Kahlo confessed to her husband about her affair with Trotsky. Then, the Riveras were blamed for murdering Trotsky, who was communist. Before Kahlo’s death, she achieved her first and only painting exhibition, with Rivera, who was supporting his spouse.

Kahlo’s artistry was unique in Mexico during the 1930s and up to her death in 1954. No other artist carried the same manner or talent, not even the famous artist Diego Rivera. Kahlo has been labeled as a Surrealist, but she thought otherwise. Mike Brooks shares Frida’s statement: “They thought I was a Surrealist, but I wasn’t. I never painted dreams. I painted my own reality.” Her paintings display an array of bright colors that makes them flamboyant and noticeable. Furthermore, they can be grotesque for some people, but Kahlo shows the excruciating pain in her spine that she had to endure her entire life in the 1944 painting, “The Broken Column.” However, she did create self-portraits that are not outlandish. She simply described her personal appearance and the Mexican culture, whether she was blissful (1931’s ‘Frieda and Diego Rivera’ portrait) or feeling melancholic (her 1940 painting, ‘Self-Portrait of Cropped Hair’). There are countless artworks in her museum in Coyoacán, Mexico.

Throughout most of the 1900s, the Mexican culture normally found women marrying at a young age and starting a family, usually having three or four children or more. The men worked hard labor, and the women stay at home raising their families. Completing their education in order to obtain a career wasn’t an option in most cases. In contrast, Kahlo changed this custom for her culture by attending school and making a difference for her community politically. She fought to eliminate imperialism for her country, as seen in the film. Now, in the twentieth-first century, the number of Mexican women including Mexican American women getting an education has increased. Progressing their lifestyle by finishing school, holding a career, and having a family at the same time is now possible.

ALSO READ
Review: Watching How Much We Watch in HBO’s ‘The Princess’

Many of Kahlo’s fans also show a huge appreciation to the famous artist for empowering homosexuality in the Mexican culture. Now, entertainment shows are embracing it more, and the LGBTQ+ community can feel the recognition. Tanya Saracho’s Vida series, which mainly concentrates on lesbianism with protagonist Emma Hernandez (Mishel Prada), is one show not to miss. Vida’s poster replicates one of Kahlo’s paintings, ‘The Two Fridas,’ created in 1939. Saracho’s creativity in Vida’s poster illustrates Emma sitting next to her sister Lyn (Melissa Barrera) holding hands, each wearing a Mexican folklore outfit and a thick, gold necklace with a large heart size pendant. In the show, both sisters are very distant from one another and each sister has their own personality that sets them apart, like ‘The Two Fridas’ when carefully analyzing the painting. Now, more and more shows are including homosexuality as an important aspect in television.

The famous Mexican artist Kahlo has been internationally recognizable, specifically in Britain. Florence and the Machine, an indie rock band that formed in 2007, included in the band’s 2011 Ceremonials album one song in particular: ”What the Water Gave Me,” written by London native Florence Welch and Francis “Eg” White. The song refers to the title from Kahlo’s 1938 painting. Could this be a coincidence? The answer would be no, it isn’t a serendipity. According to Wikipedia, Welch has said, “It’s about water in all forms and all bodies. It’s about a lot of things; Virginia Woolf creeps into it, and of course Frida Kahlo, whose painfully beautiful painting gave me the title.” Kahlo’s “What the Water Gave Me” includes many figures and people brushed on water, telling various stories within this one painting. In addition, Welch, the lead band singer, published her own personal book, ”Useless Magic,” which has a striking illustration of a bright red heart on her book cover in Kahlo’s same artistic style. Welch reveals several amusing Kahlo look-a-like drawings in her book along with her lyrics (award-nominated and award-winning songs) from her superb albums. Kahlo continues to be a huge inspiration in the music industry as well.

Sixty-six years since Kahlo’s death, we continue to honor her today and in the next centuries as a Mexican artist who opened boundaries during her lifetime. She represents a powerful female identity and making an impact for the Mexican culture and other cultures in various ways. No wonder Kahlo leaves behind a marvelous legacy.