Not the coming and going type, but the type many of us know from seeing our favorite works adapted—the departures the adapted version takes from the original text.

How far does the producer/showrunner have to get away from the original work to bring the story to the screen? For some books, the departures are minor and do little to alter the original story. Potterheads may say this happened when their treasured books became films. Other departures are so drastic, we never speak of them again (Superman Returns). The best departures, in my humble opinion, are those that work to improve the story in some way. This is what I think happened this week on “American Gods” on Starz.

Many of you AG book fans have been thinking about the departures that showrunner Bryan Fuller took from the Gaiman original. Despite the many ways in which the book and show do not match, Fuller manages to create a thrilling show that even the fans of the original book can love. He creates departures that, so far seem to add a cultural component to the AG story that was only marginally there before. Nevertheless, the enhancement feels natural to the story. In fact, this week’s enhancement had me fooled, and I’ve re-read the book too many times to count. 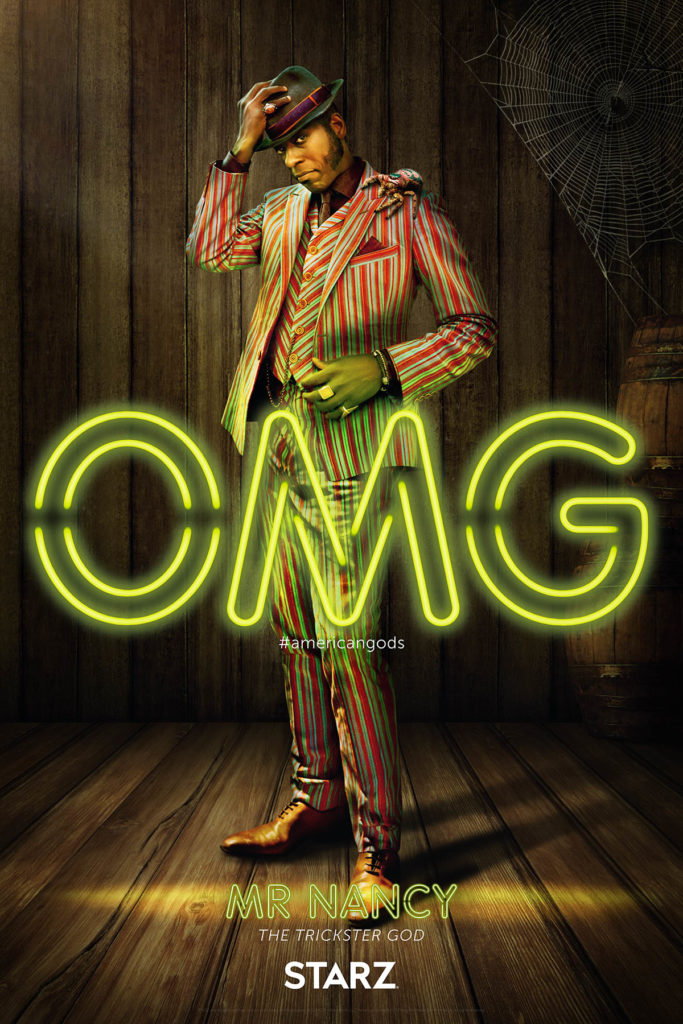 Take a look at the opening scene for episode two. It was stunning. Orlando Jones breathed life into Compe Anansi, also known as Mr. Nancy, that made him nearly leap from the screen as he spoke, no preached, about the future of the black man in America. The viewer’s eye never left him, in fact, the audience could feel the rage building with each repetition of the way blacks are “fucked” in America from the day they stepped on shore as slaves.

The scene opens with scared, miserable black bodies in the belly of a slave ship praying to the gods of their people for relief, in a pattern that is all too similar to the “Coming to America” sections of the book Mr. Ibis writes. Even Anansi’s speech is poetic, historically rich, and very raw like it could come from the pages of the book despite the mentions of Black Lives Matter and other modern cues.

Couple Anansi’s opener with the image of Shadow lynched in the hanging tree, and you get an indictment of the American abuse of the black body since the day it was brought over from its native land. The juxtaposition of these two scenes is not an accident. Both are departures created to insert a screaming commentary into the AG story. And, it fits like a glove.

There are other departures to discuss from the episode… 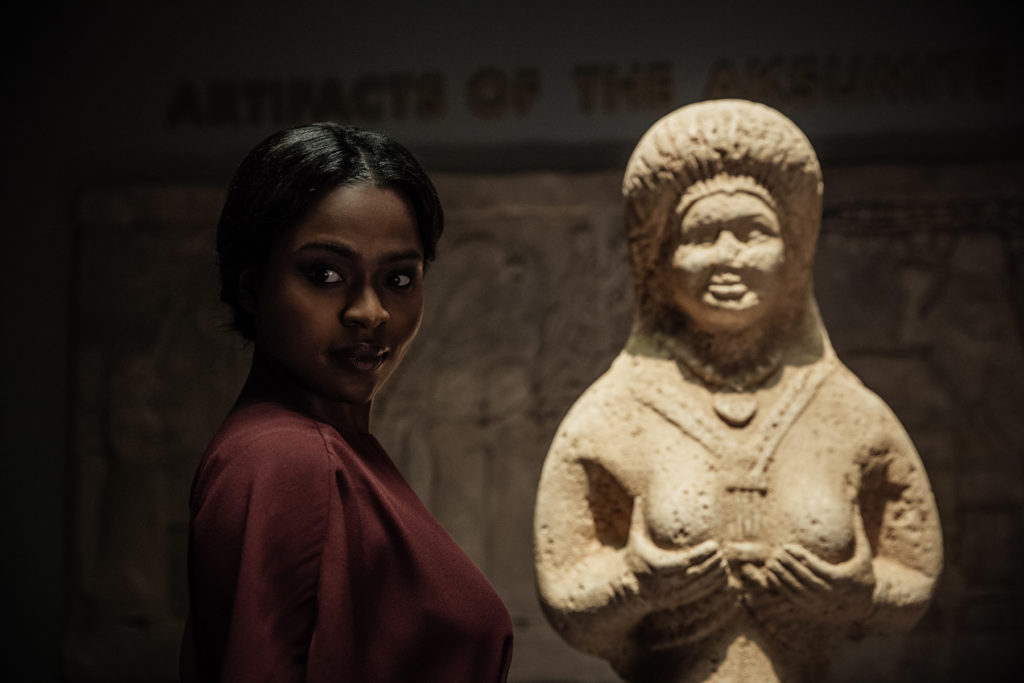 Bilquis returns in a departure that forces her backstory ahead of its position in the book. Did you notice that the entire story was told in silence? No dialogue. The scene has the multiple victims and the signs of the Queen of Sheba’s current profession. She is a prostitute, one who has no qualms about where her “living” made from. After an assortment of Janes and Johns travel through her bedroom, Bilquis lies in beautiful bare reflection. A single tear falls her face, and then there’s a trip to the museum. Why? The Queen misses the good old days.
We see that those days are thousands of years in the past, told by the artifacts Bilquis lovingly gazes upon. The monument of her caressing her breasts and the jewelry in the case (that we find ornamented her naked body) seem to be a bit of nostalgia for the days when a mass of people worshiped her and not just one person at a time in a lonely hotel room.
Bilquis, her present profession and the glimpse of a backstory do appear in the book, but much later and in a different form. Fuller’s silent departure from the book here is a respectful look at female goddess in a profession that many would define as filthy or disgusting. However, Fuller never shows Bilquis on the street, the typical black “hoe.” There is never the chance to lower her to any of the stereotypes that black women in Hollywood are subjected to. She is always elegant and always terrifying. She is more exalted, much more powerful, and seemingly much more important to the story in this departure. It’s like Fuller is setting Bilquis up for a much larger role than the one we saw in the book. He is also making a bold statement about the black feminine form.

I can’t wait to see what’s next for our goddess.

Another character moved ahead of schedule is the potty-mouth Lucy that Shadow encounters in the store. The departure takes place in real life and the broad daylight, whereas in the book it is in the middle of the night as a dream. The departure makes the exchange between them more important than in the book and seems to be prepping for something more spectacular. It also keeps the theme of gods trying to take possession of Shadow as if he was a slave more evident. 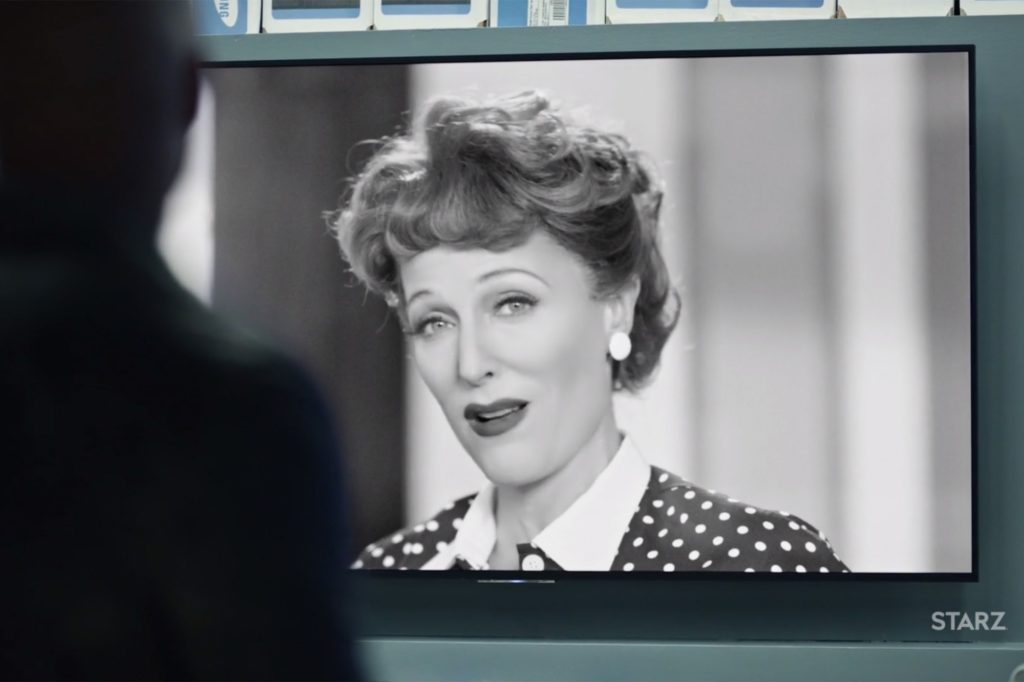 Laura’s appearance to Shadow after her death is truncated in the form of a dream, which is a great departure from the pages and pages of lines Gaiman puts in the woman’s mouth in the book. Her short, dreamlike scene makes me wonder if Fuller plans to minimize the role of Laura in the book. Thoughts, fellow AG nerds? Laura doesn’t seem to add much to our new socially progressive AG anyway. Anybody else happy that Fuller shut her ass up?

These departures, from the lynching to Mr. Nancy’s story to Bilquis and Lucy and all work to expand the story for television audiences while allowing for more cultural commentary along the way. I am sure that all of the fans, myself included, expected changes along the way.

However, these departures surpass our expectations. How many of you went reaching for the book after Mr. Nancy’s scene? Fuller created that scene with such care for the original work that it felt as if it could easily be set down in the original AG with no other revisions needed.

It’s final scenes of Sunday’s show, where we finally meet Czernobog and the Zorya sisters. Here, I must commend Fuller for casting another character exactly as I imagined her while reading the story (the first such casting was Mr. Wednesday). 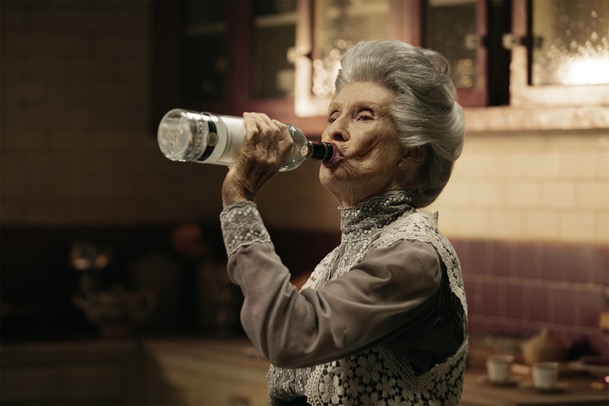 Guys, I swear I always saw the grandma from “Raising Hope,”Cloris Leachman, every damn time there was dialogue for Zorya Vechernyaya! Get out of my head AG casting.
Despite a handful of departures, their part is portrayed mostly as Gaiman wrote it. I never noticed it before, but the exchanges between the Slavic gods and Shadow are like those between old white people and a black person they meet for the first time. I know some of you can’t imagine it, but these people seemed to have gone all their lives without socializing with a black person. In fact, Czernobog calls Shadow his “only black friend” after describing how he was going to bash his brains in with a gnarly, bloody hammer. The old white people always slip into a racial conversation around Shadow, and it is always awkward. Take, for example, Czernobog’s announcement of Shadow’s blackness as a segue in their dinner conversation. These people do not know how to handle race, or relate to race or talk about race around a black person.

I love how Fuller begins the episode in the blackest way possible, only to end it with whiteness still struggling to come to terms with something that has been a part of America for centuries. This stark contrast, helped along by the departures, are a mirror on our real-life race relations, making our issues and discomforts with race laughable. We live in a country spackled together with the blood and tears of black people, yet we are still having trouble centering blackness in normal, everyday conversation? Haven’t we had enough time for compromise and exploration? Or, is 200 years not enough time? Y’all need a few more minutes, America before we can start a straightforward conversation about race without the intrusion of whiteness?

The departures allow Fuller to hand new viewers and old fans a solid, entertaining piece of commentary on culture in America. I only hope it continues and doesn’t become a novel way to draw a crowd.

Keep the departures coming, but make sure they have a purpose. We’re keeping our eye on you, Fuller.