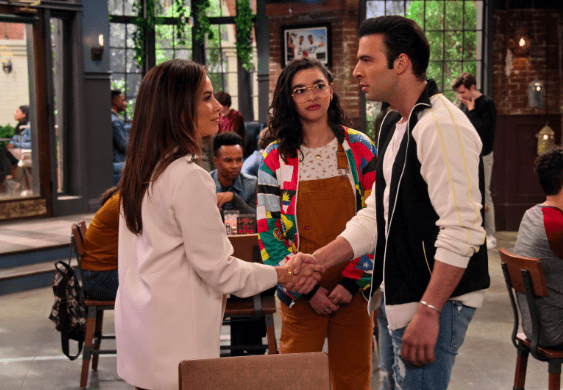 Ashley (Paulina Chavez) meets Tio Victor (Jencarlos Canela) at his restaurant for more coffee to watch the Olympic games. Victor is upset because a rival coffee shop, owned by Gia Caberra (Eva Longoria), has won “Best Breakfast Burrito” and he claims that she stole her recipe. A recipe that has been passed down for generations! Tad brings in one for Victor to taste. The taste test doesn’t go well; they taste the same. Victor has a plan to take her down.

Gia makes an appearance at Victor’s coffee shop with a cease and desist order. She thinks that Victor is trying to steal her burrito. She flirts with Nico (Mario Lopez), Victor’s restaurant partner, to get him to stop the feud. Nico almost gets caught up and walks away. Ashley stops Gia and Victor from fighting by suggesting that they have an Olympic game to settle things down.

The games are cornhole, paper football, and mind reader. Ashley at first doesn’t agree with Victor’s heated spirit for the events but is on board once she sees the meme Gia created. Let’s just say Victor’s missed goal kick picture comes back to haunt him. Victor chooses Ashley’s friends to help with the events: Tad (Conor Husting) will be playing paper football, Ashley and Brooke (Bella Podaras) are on mind reader, and Victor is heading the cornhole. Stick (Reed Horstmann) doesn’t want to be a cheerleader and suggests a qualifying round for paper football. Stick shows off his skills and gets to head it off. Brooke and Ashley slack off by watching the Olympics instead of training for their event, stating that they read each other well. Of course, that will affect them later.

While lighting a ceremonial torch for the opening ceremonies, Stick burns his hand. He’s out for the games but will train Tad. Gia’s team has Victor’s face on their shirt. She is ruthless, and he doesn’t make the last shot. Tad’s training with Stick doesn’t go as planned but apparently Tad has an idea. Mind reader gets a bad start when the girls find out that there are multiple categories for the game. They end up on pop culture, which Ashley doesn’t know much of. Ashley runs off to the bathroom due to the embarrassment. Tad’s idea is to become Stick, act and dress like Stick, in order to be able to play like him in paper football. The whole thing works out for him and results in Tad winning. Ashley and Brooke turn things around in mind reader by using events that transpired for Brooke to get the cards. The girls win the event, but the paper football players were disqualified for destroying the paper football table. For a tiebreaker, a staring contest will ensue between Gia and Victor.

Cocoa (Tia Mowry) and Moz (Anthony Alabi) stop by the coffee shop to see Victor. The two are picked to referee Gia and Victor’s staring contest; Moz is to watch Gia and Cocoa Victor. Gia’s tactic is to distract Victor by wearing her Dallas Cheerleader’s outfit. She looks good in it.  Cocoa decides to switch who is watching who. (I don’t think I’ve ever played like this.)

Right away, Victor’s corneas are struggling. Ashley suggests yawning to induce tears then brings up characters from family movies that have died to help him cry. Gia attempts to tempt a tearful Victor and wins when he closes his eyes to kiss her. Sad, pitiful thing. Gia claims that the rumors of her liking a guy on the team were true; she had a crush on Moz. Cocoa takes Moz and leaves. I would too. Gia is too comfortable.

Ashley calls out Gia for using her femininity to trick her Tio Victor. Gia admits that she did/does have a crush on Victor and Victor admits his feelings as well but Ashley can’t allow them to hook up because this is about a family recipe. Well, Gia got hers from her great-grandmother, and she has the picture to show it. The picture comes from the same one Victor has of his great-grandfather. The two are related! Gia tells Victor to keep the burrito and dips.

I’m not sure if I saw that coming but it was one nice twist to things. Good thing Ashley is there to stop Victor from making mistakes.