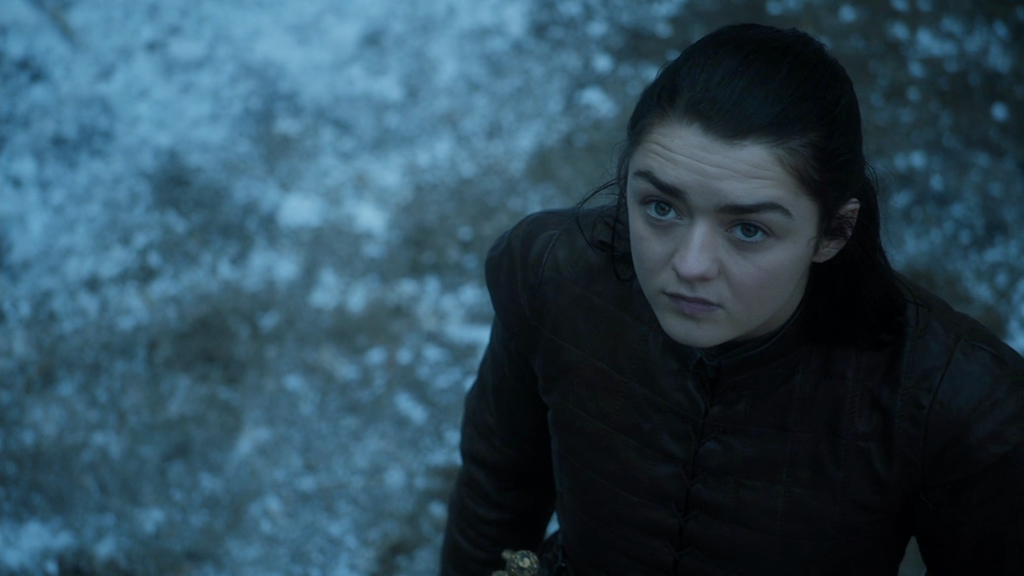 So Game of Thrones has a new game plan: Deliver a Wight to Cersei. Uh…yeah, great plan. Let’s just walk out into the folds of winter and confront the army of the dead in their element with, let’s say, seven men who hate each other. Awesome. Great plan… said no one ever.

One of the good things about this cluster of men is the new bromance that is Jon and Gendry. Yes, that Gendry. Son of Robert Baratheon, Gendry. Well, he is back on land from four seasons of rowing and has a giant hammer… No, seriously, he has a giant Warhammer that he already showed us he knows how to use when he bashed in the skulls of two soldiers at King’s Landing. With Jon and Gendry teaming up, we now have a duo that a) has blacksmith skills to potentially craft dragonglass weapons and b) dragon skills because hello, Jon totally stroked Dany’s dragon. (That wasn’t a metaphor… yet.)  I’m pretty sure all this will come together nicely.

If they make it out of their winter quest alive.

So now that a sketchy new plan has been set for the war, let’s talk about the mini battles that took place this week, starting with Jaime versus Cersei. Right after being saved by Bronn from death by dragon, Jaime had to face his sister-wife. After mentioning the dragon bit, it came out that Olenna was the one who killed Joffrey. Cersei was pissed that Olenna got to die so easily. Not to mention they lost a lot of men and supplies in that dragon battle. Cersei is a win or lose kind of gal with no options in between. She reminds Jaime that a soldier should know his choices as well. Jaime was left feeling like a little boy who got his candy taken away. Then Jaime goes and has a not so secret meeting with Tyrion, set up by Bronn, of course. Cersei is no joke y’all. “Never betray me again.” Basically, if Jaime messes up again, he’s dead. But, to make sure he falls in line, Cersei drops the I’m pregnant bomb. Say what now? Don’t betray me, but hooray I’m pregnant and I’m going to tell everyone that it’s yours. Cersei one, Jaime zero.

Next up we have Daenerys versus the Tarlys. The shortest battle ever went a little something like this:

-Bend the knee or die.

-I will not kneel.

Father and son burnt. Sam is now an only child and head of House Tarly, even thoughhe currently has no idea. For real though, Kneel or Dragon Flambé are not the greatest options. Now Dany has men who knelt out of fear instead of loyalty. They could easily kill her on the field or do a switch at the wrong time. Not the best way to gain more men. She even has Tyrion and Varys whispering over wine, comparing her to her father. Not great boo. Not great. Tarly House negative one-million, Dany one, Sam one-billion. Clearly, Sam is winning at life. Sam has also packed his bags and family and left the Citadel. Sam versus the Maesters was becoming too frustrating for all of us. Even with Gilly spouting knowledge of important annulments and marriages and stuff, they are better off without the Citadel.

Dany also had some sparing time with Jon. For one, when she landed back at Dragonstone she thought she was all big and bad, but then Jon knocked her down some pegs when he touched and petted Drogon. In the face! Yaass! Later, when Dany thinks she has the upper hand and tells Jon she didn’t give him permission to leave, he hits her with, “I am a king. I don’t need your permission.” I love this show’s writing. You can tell Dany is a little shook by Jon, in a good way. The look they have before he departs with his crew toward The Wall said a lot.

Lastly, we have Arya. Arya is slowly making her rounds with peeps in Winterfell. First it was Brienne, playfully of course, but still a noteworthy match, and now Sansa and Littlefinger. Arya loves peeping around her corners. She likes being somewhat hidden. But, home-girl needs to get it together if she is going to outsmart Littlefinger. He is a pro. That note she found, very intentional. Of course, I paused my TV and tried to read that scroll, but most of it was blurred out. (We’ve seen Sansa’s handwriting on screen before. Remember when Sansa wrote to Robb asking him to swear fealty to Joffrey. This was of course written in coercion by Cersei. Littlefinger was present then too.)

Oh, the tangled web Littlefinger is trying to weave between Arya and Sansa. It doesn’t help that Arya already has quarrels with her sister over Jon. Arya doesn’t like that Sansa just sat and listened to everyone talk crap about Jon. Although Sansa refutes it, Arya thinks she is gunning and planning for Jon not to return so she can be Queen of Winterfell. It’s all a big misunderstanding…! Although…Maester Pycelle did mention back in the day, “In ten years, who knows what treason she may hatch.” Dun Dun Duuun!

So many little battles being fought and we haven’t even got to the White Walkers. I fear a lot is about to go down in these last two episodes. I fear a lot of people will die. I’m so nervous, scared, anxious, and excited. Sunday can’t come soon enough.