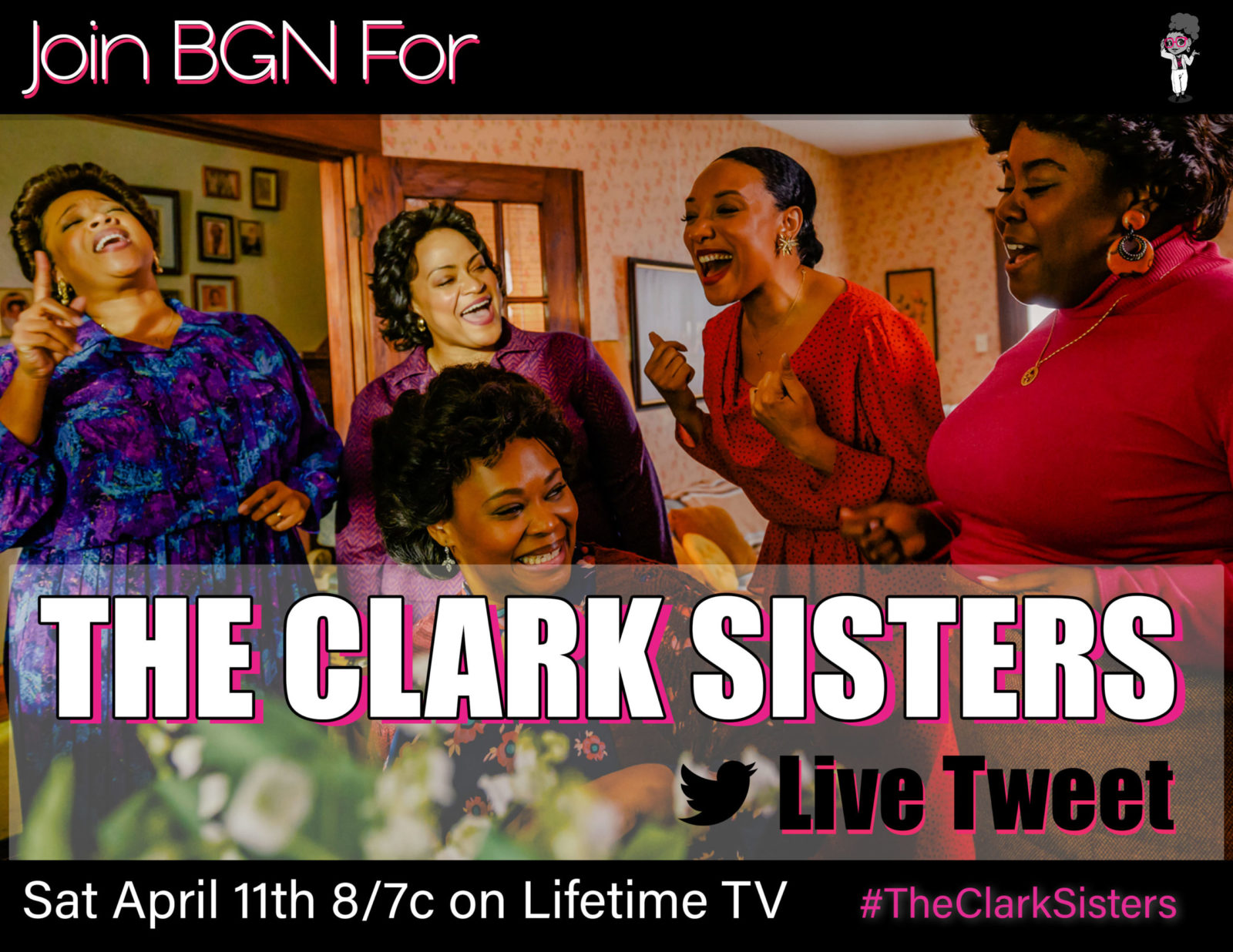 On Saturday, April 11th, tune in at 8/7C to watch The Clark Sisters: First Ladies of Gospel on Lifetime.

The Clark Sisters Lifetime film features several of the group’s biggest hits, songs that contributed to their acclaim as one of the biggest-selling gospel groups in music history.

From executive producers and Grammy Award winners Queen Latifah, Mary J. Blige, and Missy Elliott comes the authorized musical tale of the incomparable gospel singers, The Clark Sisters. The Clark Sisters: First Ladies of Gospel recounts the inspirational story behind one of the most successful gospel groups in history and of their trailblazing mother, Mattie Moss Clark (Aunjanue Ellis). Having sold millions of albums and credited with bringing gospel to the mainstream, the five Clark sisters (Christina Bell as Twinkie, Kierra Sheard as Karen, Sheléa Frazier as Dorinda, Raven Goodwin as Denise, and Angela Birchett as Jacky) overcame humble beginnings in Detroit, enduring abuse, loss, rejection, betrayal, and sibling rivalries to achieve international fame as icons of the Gospel music industry.

In addition to Latifah, Blige, and Elliott, the film is also executive produced by Loretha Jones, Holly Carter for Relevé Entertainment, and Shakim Compere for Flavor Unit; Christine Swanson directed the teleplay by Sylvia L. Jones and Camille Tucker.

Black Girl Nerds is excited to live-tweet this special feature presentation especially during a time where so many of us right now are confined to our homes and need some entertainment as we ride out the storm and hope for the best of what is ahead. Join us on our @blackgirlnerds Twitter handle as well as @blackgirlgeeks, and use #TheClarkSisters, for the premiere of this dramatic movie musical event.

A series of special online events (including a Twitter Party with Queen Latifah, Mary J. Blige, and Missy Elliott!) is scheduled for premiere night on Lifetime, Saturday, April 11th:

DeVon Franklin (on Lifetime Facebook Live) and Michelle Williams (on LifetimeTV Instagram Live) will talk with movie cast members, The Clark Sisters, and other guests on a special “virtual” red carpet.

To get everyone in the spirit, Kirk Franklin (on LifetimeTV Instagram Live) and Erica Campbell (on Lifetime Facebook Live) will host a special online countdown event — inviting the cast, influencers, and surprise guests to share about why they love The Clark Sisters, and maybe even perform a little!

Join the cast, creatives, and The Clark Sisters, for a Live Twitter Party during the movie premiere.  Use #TheClarkSisters to share your comments and questions! Invite your friends!

The film’s co-writer Camille Tucker is asking folks from coast-to-coast to host a Watch Party for The Clark Sisters: First Ladies of Gospel. Let’s honor the Clark Sisters by making this a great premiere! To RSVP, click https://www.facebook.com/events/1791340554323809/ and mark GOING.

And at 7 PM PT join director Christine Swanson, co-writer Camille Tucker and other special guests on Facebook Live for a special pre-show Q&A panel discussion about the writing, directing, and making of the film.

During the broadcasts, this Saturday, use the hashtag #TheClarkSisters and also follow @LifetimeTV

We look forward to seeing you there!