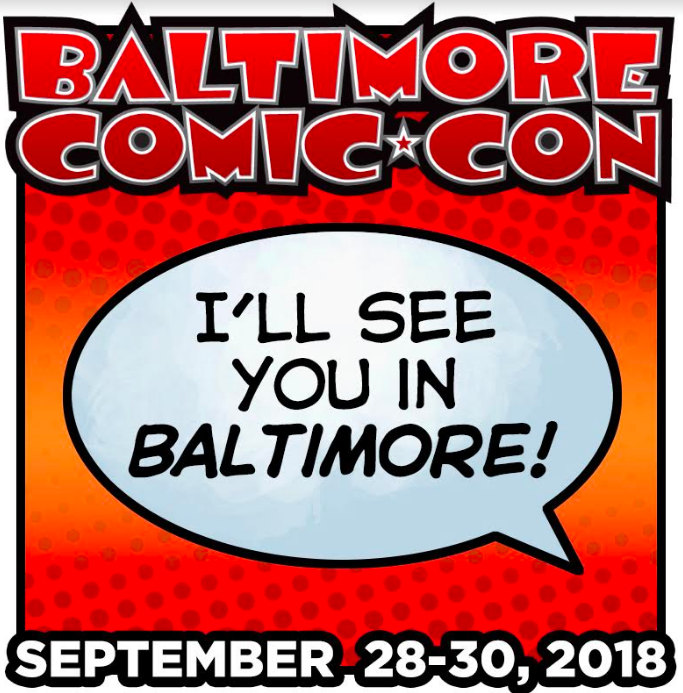 On the Patapsco River near where it empties into the Chesapeake Bay is the city Baltimore.  This year, we nerds will be begging and bribing our loved ones, friends, and acquaintances to travel to Charm City for this year’s Baltimore Comic-Con (BCC). Staged out of the Baltimore Convention Center, which is conveniently nestled between Orioles Park and the Inner Harbor, the chances are good that fun abounds all around the convention.  This will be the 19th year and starting the Thursday before, the organizers will be racing to get the convention center ready.

Last year, the comic book guests included comic icon Frank Miller, along with convention regulars Louise and Walt Simonson, Neal Adams, Tom King, Brian Stelfreeze, and Ken Lashley. Frank Miller returns this year and comic stars Scott Snyder, Greg Capullo, and Jenny Frison are in the house this year as well.  With all this kind of talent at the convention every year, another aspect of the BCC is a featured up and coming writer/artist.  Last year it was Jamar Nicholas, and this year the organizers revealed that the artist featured on our program guide and T-shirt is Sean Chen. Sean’s a long-time friend of the show, and we’re happy to have his fantastic artwork represent the Baltimore Comic-Con this year.” As with most conventions, the focus is not solely on comic books.  The BCC has a great focus on children’s activities all convention long, although Sunday is the best day activity-wise.  The kiddie cosplay is simply adorable.  For non-comic geeks, there is also a myriad of media guests.  This year includes Mike Colter, Wil Wheaton, Katrina Law, Tricia Helfer, and Zachary Levi.

Another feature unique to the con is the Yearbook.  With the Convention Yearbook, you can spend an entire afternoon wandering the Artist’s Alley meeting independent talent from all over.  BGN asked the organizers about the theme of the Yearbook this year and why should someone consider purchasing one.

2018 Yearbook theme is Terry Moore’s Strangers in Paradise, which actually includes all of Terry’s properties, including Motor Girl, Echo, and Rachel Rising. We have a vast array of contributors this year (actually a few more than last year!) drawing Terry’s characters, sometimes with their creator-owned characters and sometimes by themselves, and they are varied, beautiful, and occasionally hilarious! Every year, we feature a scavenger hunt where guests go and get a number of signatures in their yearbooks and can then choose from a number of bonus art prints in the theme of the Yearbook that are not in the book. Our attendees love it!

Recent unrest on the convention circuit may discourage some from attending.  BGN questioned the organizers regarding their efforts to manage any disruptions.  The organizers indicated that they’re “learning and improving all the time.”  And that “the show will continue to grow and evolve to ensure everyone has a spectacular and safe time at our event!”  So, while San Diego and New York vie for the largest convention bragging rights, the BCC consistently works every year to simply be the best.  From the great location, unique convention activities, as well as the comic and media guests, this is one convention where everything seems to focus on the experience of the attendees.  As such it seems like this will be another banner year for a fun time to be had by all.  The convention starts at 1:00 pm on Friday, September 28, 2018, and we here at BGN look forward to seeing you and yours in the gleefully short line!