In the comic book TV landscape, The Gifted finds itself looking at a world where mutants are subjugated and jailed and the X-Men are nowhere to be found. As someone who hasn’t watched an X-Men movie since the Halle Berry days, I’m glad that it’s not mired too deeply in the canon of the films. It’s always good when a pilot can eschew a bunch of complicated backstory and jump right into the main events. BGN caught up with the cast of The Gifted at New York Comic-Con last month.

First up, were Amy Acker and Stephen Moyer, who play Reed and Kate Strucker the parents of two mutant teenagers on the run from the law.

Steven was in a chipper mood right off the bat, stating that he’d been partying since he got to New York. He gently ribbed Amy because she wouldn’t come out, preferring a good night’s sleep. Once they settle in, we begin with our questions.

Reporter: Your character right off the bat has a big internal struggle. What can we expect? How will the narrative develop? … I mean you’re actively participating in the oppression of mutants as your job and now…

Stephen: I’m glad you just added that part because I don’t think he thinks he’s actively 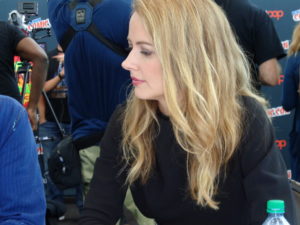 participating in creating this disparity. I think he thinks he’s doing what is good for society, to keep people safe. That all changes on a dime when he realizes his family is going to be affected by this. And that catalyst makes him have to consider some of the choices he’s made. He knows when people go into the mutant detention center that they’re not going to be seen again. And he doesn’t want to lose his kids.

Reporter: Related to that, Amy, could you talk about the scene where the government is at your door in the middle of the night and your politics change in 5 seconds? What is the show’s message about awareness of privilege in 2017?

Amy: I think that is a big issue that we try to address in the show. Just because something doesn’t affect you doesn’t mean it’s not worth fighting for. I think they have complacency in living their very privileged life, wanting for nothing. Then all of a sudden they have someone at their door saying they’re going to take their kids… I thought it was interesting when she says, “But my husband is a prosecutor,” and they’re like, “Yeah, that’s not gonna help.” So, it is a great turn. And from this point, the questions are asked. Where did we go wrong? Why didn’t we ask these questions earlier? How do we make up for this now?

C.R. Sparrow: Both of you come from TV franchises (True Blood for Moyer and Angel for Acker) that are beloved to this day. And now you’re moving into this new franchise that has that same potential. Do you feel the sense of bigness in this community of genre television?

Stephen: We’ve both talked about this obviously. When building a career you don’t go out and say, “I want to do that kind of work.” You have to be open to everything. It’s sort of incidental. She’s a classical actress. I started out as a classical actor. Patrick Stewart and Ian McKellan started out and still are classical actors. The framework of sci-fi is that it’s taken from real life issues. We’re both very interested in what the X-World talks about. It’s about otherness. It’s about difference. It’s a metaphor for civil rights, and the LGBTQ community has obviously embraced it. To be in something that’s ultimately fun and entertaining…

Stephen cont’d: … And about something. I was drawn to this story of two ordinary people dealing with their children who turn out to be extraordinary. And there is a similarity in that allegory to that of True Blood with the ‘coming out of the coffins.’

Next up: Natalie Alyn Lind and Percy Hynes White who play the aforementioned extraordinary teens, Lauren and Andy Strucker.

CR: Were you able to draw from your own experiences with school. 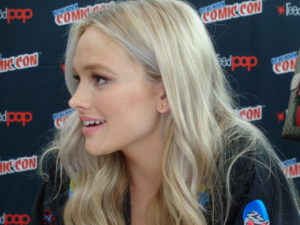 Natalie: I never went to school. I was always homeschooled. Going into the school environment was always different for me. But it was so cool. It was like, “Oh my gosh, this is what a school dance would be like!” I think we have a lot of great topics in the show. There are a lot of young kids hiding who they really are from their parents and friends because they’re scared of it. Our show kind of touches on that.

Next up: Jamie Chung and Emma Dumont who play Blink and Polaris respectively.

CR: With both of your characters, there’s intensity there. Do you have to take 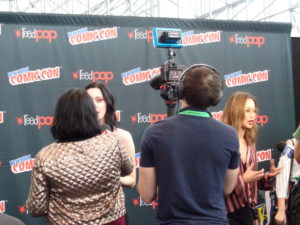 time to find your character or are they right under the surface?

Emily: My answer is no. I am my character. As Polaris, I get to have all the anger and say all the things I don’t get to say in real life.

Question: How did you guys get into your characters since you didn’t have any source material? Did you use Bryan Singer as your resource?

Sean: Bryan Singer is always a resource. Matt Nyx kind of gave us back-stories. His stories are so in depth and so thought out that it feels like [Eclipse] has been in the comics for a very long time. That has to happen or he’ll stick out like a sore thumb when he’s next to Polaris and Blink and Thunderbird.

CR: And as an actor, were those difficult shoes to step into, being an oppressive force?

Cody: Yeah, both being that guy and the reason he became that guy is some heavy stuff. But, I’m having a great time playing the character. It’s a lot of fun. (Cody’s big episode, “boXed in” debuted this Monday.)

The Gifted airs on Mondays at 9/8c on Fox.