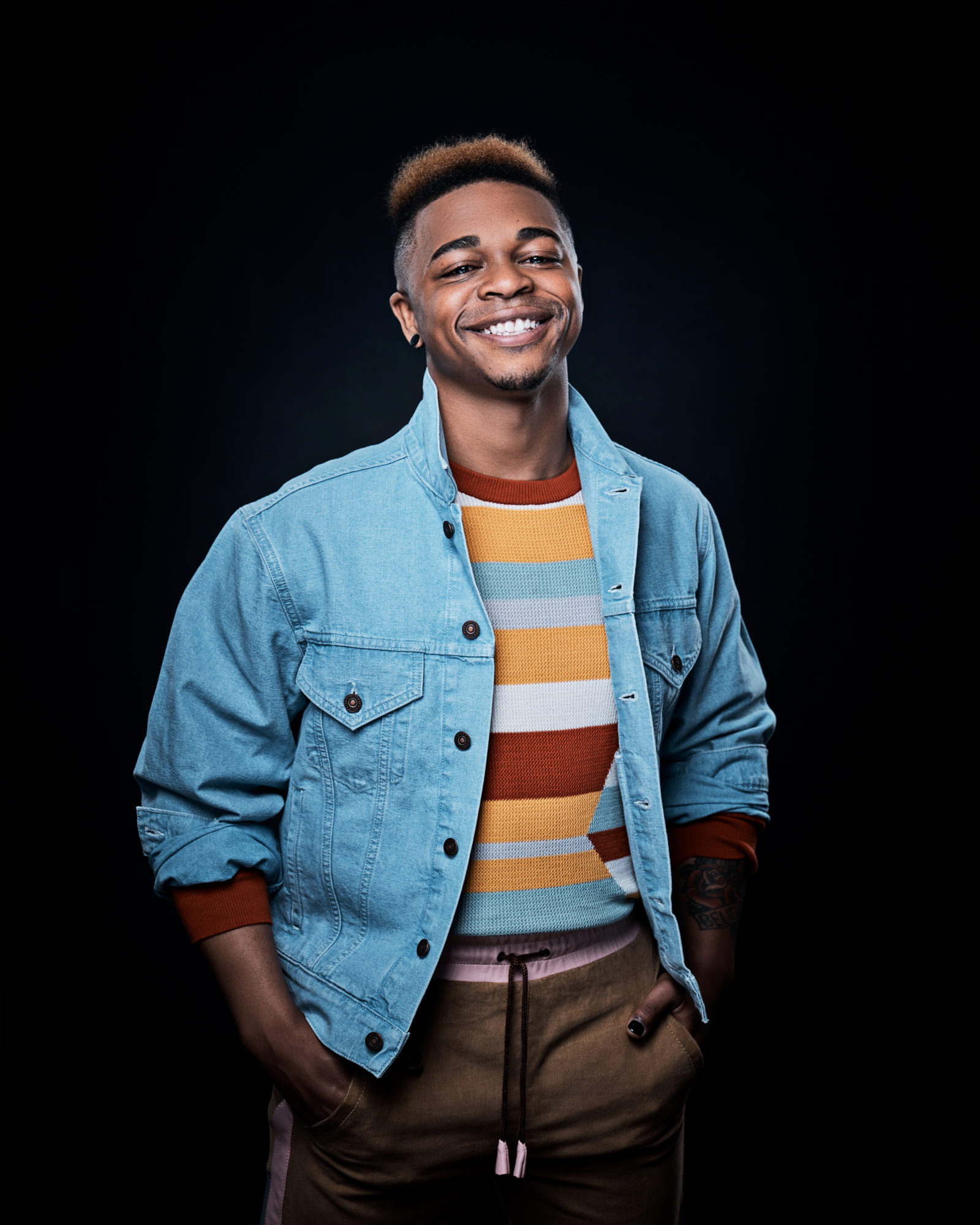 Jeremiah Craft is a charismatic young man whose humor will quickly capture your attention. While we’ve seen him in Bill & Ted Face the Music, Luke Cage, and The Last O.G., he’s now flexing his skills in Peacock’s original series Girls5eva. In this quirky comedy, Craft is sharing the screen with the likes of  Renee Elise Goldsberry, Busy Phillipps, Sara Bareilles, and Paula Pell, and he’s holding his own. Craft plays Lil Stinker, a hot, new rapper who inadvertently revives the career of this one-hit-wonder girl group by sampling one of their songs. The women use the opportunity to perform with Lil Stinker with hopes of giving their pop-star dreams one more shot.

Craft is the son of well-known American broadcaster, Sally-Ann Roberts and the nephew of ABC’s Good Morning America anchor, Robin Roberts. While those are some tough acts to follow, Craft does so with honor and pride.

BGN spoke with Craft via telephone about how a cheese sandwich landed him an agent, coming from Black excellence, and being the guy who can do it all.

Tell me how your career springboarded because of a cheese sandwich?

Oh man, it’s been so long ago now. [Laughs.] Well, my mom knew that I was too small to play sports. She tried to push me to do anything besides sports or anything that could get me hurt. I’m five eight, so I’m not necessarily a gargantuan man. After doing a whole bunch of different stuff every summer, eventually I got to acting, and I just stuck with it. I saw Will Smith in an episode of Fresh Prince, and he was just so cool. He was so smooth, and he was getting all the girls. I wanted to be that guy. I pointed at the screen like, “Hey Mom, I want to do that.” Years later, I’m in the first year of college in the New School for the Performing Arts, and it was lunchtime. It was my first week of school, and there was a cute girl. Long story short, she was getting a cheese sandwich, and I wanted an excuse to talk to her. I took the opportunity. I walked up and said, “Hey, you like cheese sandwiches. I didn’t know we could order those.” That started the conversation, and she ended up asking me if I had a rep. She eventually connected me to her manager who is still my manager to this day, eight years later.

How did watching your mother and aunt influence your interest in the arts?

New Orleans is small, and everybody knows my mom. I’ve always said whenever my mom is known as Jeremiah Craft’s mom instead of me as her son, it’s gonna be the point where I’m like yeah, I’m successful now. Right now, no matter what I do, I am Sally-Ann Roberts’s son because my mom has such an influence over the city of New Orleans. I’m just proud to come from a family of Black excellence with my mom, and obviously my aunt with Good Morning America. I’ve gone to her many, many times for advice. She’s helped me out many times. I remember my first summer in New York, she allowed me to sleep on her couch for a bit while going to school. I’m really thankful for that, and she never ceases to remind me how that summer her apartment smelled like feet and popcorn. I appreciate that, Auntie.

Tell me about your role on Girls5eva.

Absolutely. I’m playing the rapper who goes by the name Lil Stinker… Lil Stank Stank. [Laughs.] That was actually my family nickname for a while, so that’s hilarious that ended up being my character’s name. I know my family is never going to let me hear the end of it. I don’t know… I guess that’s just a Black family thing. The only thing that could have made it better is if they’d spelled it with an “a.” But yeah, he’s looking for the cheapest sample that he can find. Girls5eva ends up being the one he chooses. Lo and behold, the group blows up from this moment that he creates, and here we have the story.

What is your dream role at this stage in your career?

I have always said there are two types of roles that once I do them, I’m successful or I’ve made it. I’ve arrived. It would either be playing a superhero or playing a rapper. Number one, I’ve been rapping just as long as I’ve been acting. My first play I was the little messenger boy in Annie Get Your Gun, at The Crescent City Lights Youth Theater. That was my first role. Ever since then I knew that I would love to play either a rapper or a superhero because ever since then I’ve been rapping. The same time I was playing the messenger boy, I wrote my first rap. It was this weird Christian rap involving a rabbit. Don’t ask me why. It was so weird all my friends made fun of me. I was like, no, I’m gonna be a huge rapper one day, I don’t care what you say. Years later I’m still working on it, but I’m getting there.

I feel like there’s so many people who are the best at one thing. Either they’re the best singer or they’re the top of the rap game, or they’re the top actor. I want to be the one guy that you can call for it all, so I could never choose one over the other for that reason. My dream is to be that one-stop-shop guy, you know, just the greatest entertainer.

You’ve worked with some heavy hitters. What has that done in terms of helping you hone your craft?

I have been able to just soak in so much, particularly in making the transition from stage to TV.  Growing up, I was a stage guy. I grew up in the Anthony Bean Community Theater; the great Anthony Bean, who’s a theater legend, he taught me the ins and outs of the stage. But on stage, everything has to sort of be blown up. Your reaction has to be big and you have to be loud because you have to make sure that people in the back are seeing what your face is doing and understanding the story. With TV, you have to make everything, way, way smaller, way, way more minute. It’s all about the eyes. It’s all about the intensity. Guys like Mike Coulter are so good at that. Guys like Keanu Reeves, who I had the pleasure of working with when I did Bill & Ted and I played Louis Armstrong… just so good at what I call the film acting. Mr. Bean, who I spoke about earlier, could do this as well. They have this weird skill where they can look directly at you and barely move their feet, their mouth moves, the words come out, and you can feel it, and you’re stunned. All the greatest acting teachers will tell you the moment you master “still man,” you master acting.

What’s next for Jeremiah Craft?

I have a lot of stuff that’s in the works right now. I am focusing on music when I’m not focusing on the show. I have my own personal project. I released an album called A Loser Is Brilliant full of great records. I’m also working on my next personal project right now. I’m just working on music, knocking down records, recording, and trying not to make my neighbors mad. Also, anybody who knows me knows I’m super into anime. It’s another one of my passions. I have a huge Naruto tattoo on my left arm. So, the album is super nerdy, anime, video game type stuff.

You can currently watch Jeremiah Craft in Girls5eva on Peacock’s streaming platform!