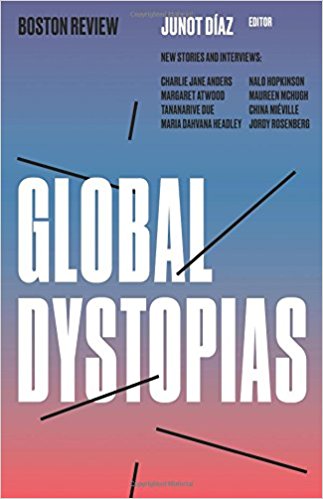 Global Dystopias serves as a timely collection of stories, interviews and essays which depict a modern perspective of the future from revered voices to new authors alike. Edited by Junot Diaz, the collection is at times humorous, dark, despairing and hopeful but always feels accurate.

The future is something humans have always spent time dwelling on and the images that are associated with it change with each generation. In the 80s, 90s and even the early 2000s, much of how we imagined the future involved radical technology a la the Jetsons, Back to the Future or Spy Kids. These types of hopeful depictions represented the time period that conceived them. This is true also of the futures shown in Global Dystopias. This collection depicts the type of futures that could only be conjured up in the here and now.

One story that stood out to me as particularly of the times is Charlie Jane Ander’s “Don’t Press Charges and I Won’t Sue”. The way the author deals with the transgender identity of the main character is candid, fresh and distinctly modern. The story takes place as much in the past of the main character Rachel as in her present. In the immediate story, Rachel has been taken in by the Go Team of an organization called Love and Dignity for Everyone, which is essentially a conversion center for transgender people. Ander’s does an excellent job of depicting Rachel as someone any reader might know; an artist with a show coming up at a local coffee shop. The flood of memories and emotions that come with seeing someone you once called a friend will also be familiar to readers. These types of familiarities contribute to the sense that, though the story is fictional, the future as imagined here may not be as far off as we would hope.

Our collective view of and feelings about the future are ever changing but one thing that is for sure is that we are always stumbling towards it. One thing that Global Dystopias makes clear is that no matter how difficult or dark the present, humans will always continue to imagine and reimagine the future. The collection raises the essentially questions of this generation, and the reader if forced to derive for oneself what type of future we can get to from here and how they want to contribute to it.

Kesia Alexandra spends a lot of time writing about being a black girl in America from her personal perspective. She is very interested in any platform that pushes black girls to the forefront and tries to do that in her own work. Find her on Twitter at @XIVXIXIXI