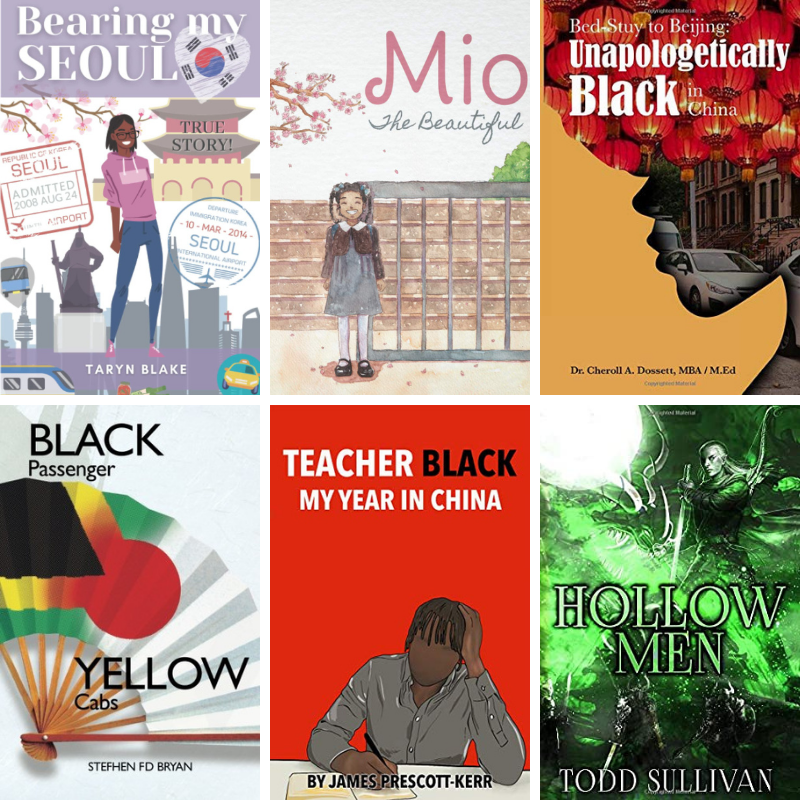 For the average person, the only thing they know about Asia is what they’ve seen in the media. But book-wise, how many of us have read a book with global recognition of a Black character whose story is set in Asia?

I’ve been very interested in Asian pop culture and reading since I was young, so the mix of a Black character whose story is set in Asia has been a dream to engage and read from. There’s been articles, blogs, and vlogs but never enough published books.

In light of this, here is a selection of 12 books across countries around East Asia. With topics ranging from dating in Taiwan to exploring reggae and dancehall music in Japan, they are bound to have more people wanting to read more books from Asia.

Although having just come out in 2020 as a response to the BLM movement, Black in Asia was published by the Spill Stories writer’s community. It highlights the diverse voices of Black people who have lived around the continent. Over 20 writers have a chapter in this anthology with their own stories about living in countries such as Hong Kong, Thailand, and Singapore.

What started as an accidental placement in his University ended up with Carl Hill Jr. eventually moving and living in Taiwan. The Unexpected Perspective documents Hill’s experiences of living in the country known for bubble tea and taking the responses and reactions of people to share within this book.

Babylon East needs more recognition due to all of Marvin D Sterling’s work. The book shows how Japan continues to be influenced by reggae, both on a cultural and musical level. Jamaican culture is truly globally spread as written from the author’s perspective, with sections of the book on fashion and dance in Japan’s reggae scene or the body and spirit touching upon people who converted to Rastafarianism.

An engaging cyber-thriller that keeps its suspense from start to finish, Tokyo Firewall by Elizabeth Wilkerson is a great novel set in the 1990s, when the interest in the online world was still new and exciting. The book centers on Allison Crane, who follows her boyfriend to Japan without a job and is unable to adapt to Japanese culture. Desperate for company, Alison logs into a cyber chatroom and meets a Japanese man. However, a troll begins threatening and cyber-stalking her. She is forced to stand her ground or face her identity and actions being exposed in real life.

A coming-of-age New York Bestseller, Fifty Words for Rain is a dramatic yet astounding book set in Kyoto 1948. From the first chapter, the reader is drawn to the protagonist, Noriko “Nori” Kamiza, a child of mixed African-American/Japanese heritage born into a prominent family but is scolded for existing as a hafu (mixed race/biracial in the Japanese language). A bit of joy is presented when she forms a band with her half-brother Akira, and Nori is motivated to fight to change her life.

Playing in the Shadows: Fictions of Race and Blackness in Postwar Japanese Literature by William H. Bridges shines a light on how Black characters were written into Japanese literature by authors and associations in the country who have stemmed representations of Black people as what Bridges sees as “fictions of race.” Bridges develops further how Japanese people reimagined Black people from the notion of literary Blackness in the 1970s to the age of hip hop in chapters within the book.

This memoir has a nostalgic feel for anyone who has lived in Seoul or been there for a lengthy amount of time. Before BTS, the popularity of soju, and clubs like nb2 or Octagon came into the mainstream wavelength, there was Taryn Blake’s Bearing My Seoul. Blake writes a collection of entertaining essays on her life in the heart of the metropolis capital as a full-time teacher.

There are not many children’s books in Japan that represent hafu children, but there’s some hope: Mio The Beautiful, written by Kinota Braithwaite and translated by Setsuko Miura. Braithwaite was inspired to write this book to be an uplifting but realistic story on his young daughter’s situation of being bullied in Japan. It’s a cute book to encourage children within the country to be kind to anyone who looks different to them.

In her book Bed-Stuy to Beijing, Dr. Cherell Dossett answers the question that most ask before traveling out of their hometown: What is blackness in a foreign country? While it does get answered, the book does not stray away from the experience of the author on chapters that explain some of her time as a PhD student in foreign languages in Guangzhou and also why she didn’t learn Mandarin in the seven years she lived in China, which might shock readers.

It’s a controversial book that had caused a storm upon release. Black Passenger Yellow Cabs: Of Exile and Excess in Japan by Stefhen Bryan is an explicit exploration that tackles the issue of Western men’s infatuation with Asian women alongside the continuing problems with misogyny in Japanese culture. Bryan’s self-awareness to his own sexual addiction, interracial relationships, and trying to understand the male chauvinism of Japanese society is interesting to read.

Want a great insight into the life of a teacher in China? Look no further than Teacher Black: My Year in China by James Prescott-Kerr. What immediately catches a reader’s eye is the first part of the title, “Teacher Black.” It wasn’t a mistake but an intentional racial slur by his students (possibly innocent as it was from kids). The book follows Prescott-Kerr’s after his graduation and how he decided to teach in China without any prior knowledge or research of living in the country.

If you’re looking for an escapism to fantasy, you must read Hollow Men, the first YA book in the Windshine Chronicles by Todd Sullivan. Set in an alternative ancient world of Korea, the story focuses on Ha Jun, a teenage Dark Elf (a subtle metaphor for Black people) who goes on a journey with companions including Windshie, another elf who he has a romance with, but also a connection with a demon. Gore, magic, demons — the book has it all!