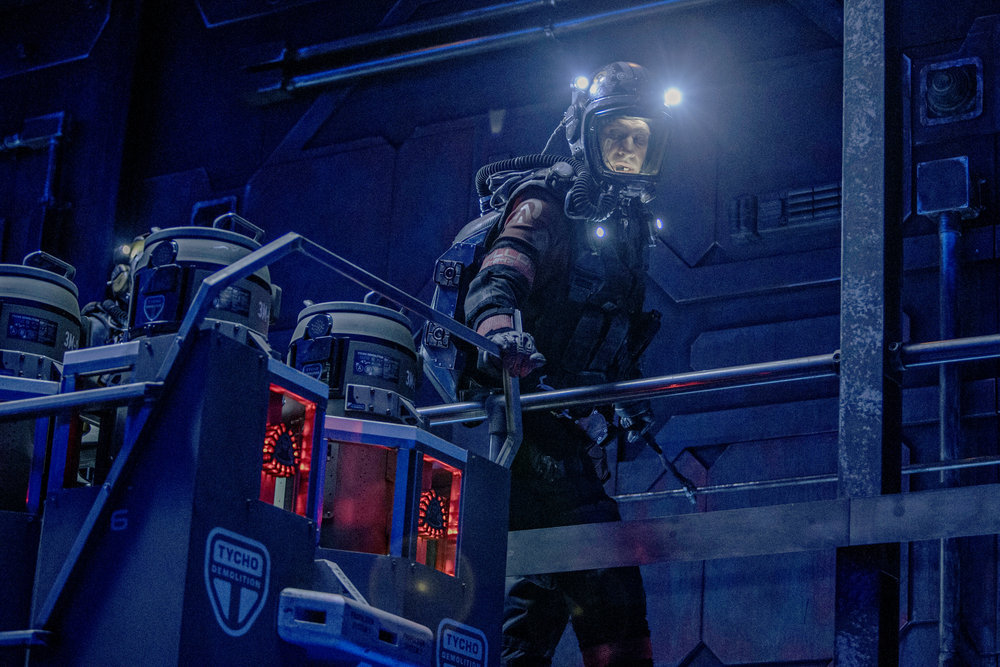 The fourth episode of The Expanse title, “Godspeed” brings us back to Eros to deal with the protomolecule. We get to see the willingness of certain characters to do what is right no matter the costs and gain some insight on what the solar system is up against when it comes to the extrasolar organism presence on Eros. Oh, and there’s a Mormon spaceship to boot.

If you need to rid the solar system of a super infectious and devious alien life form, apparently, a Mormon spaceship is the way to go. In the distant future that is The Expanse, The Church of Latter Day Saints is ready to leave this solar system behind, committed to living for hundreds of years aboard a generation ship with its own gravity well, farm land, and angelic mast. They have dedicated time, faith, and money to the endeavor, even hiring accused terrorist Fred Johnson for its construction. Their ship, the Nauvoo, is their future and they are eager to begin their interstellar journey. But alas, that darn protomolecule is on the loose and the Mormon ship happens to make the perfect asteroid destroying battering ram.

Miller recognizes the functionality of the Nauvoo as a tool to take out Eros and gets Johnson on board with the idea to commandeer the ship. The plan, in its entirety, includes a demolition crew setting bombs on the surface of Eros, the Rocinante using its guns to check for possible interference, and Johnson programming a trajectory that will send the Nauvoo towards Eros, ramming it into the sun. The plan is likely to have severe repercussions and has a low chance of success, but our protagonists are loyal to the mission, especially Fred Johnson.

Through both Season 1 and the present season of The Expanse, Johnson has been presented as a man that might have ulterior motives when helping the show’s other protagonists. However, as each episode unfolds, it becomes more and more clear that Johnson truly is a man of conviction and honor. This fact is illustrated during a scene where he and Miller try to convince Holden and Naomi to help with the mission. Naomi points out that the mission is crazy risky and that Johnson will lose everything once it’s completed. Naomi is correct in her assumption, there isn’t much financial hope for Johnson if he steals his biggest client’s ship. Stealing the Mormon ship will undoubtedly ruin future business opportunities, which could prove disastrous for a space station that is self-sufficient and scorned by both Earth and Mars. There are no ulterior motives here — Johnson is a hero.

Miller also stands out in this episode, developing into a character that is Belter to the core. It’s Miller who comes up with the plan to return to Eros to destroy the protomolecule. It’s Miller that leads the demolition crew even though space walks make him sick. It’s Miller who is willing to sacrifice himself when debris from a destroyed ship (see below) damages one of the bombs he and the crew are distributing across Eros. As a character, Miller has grown into an unselfish and dare I say, likable protagonist, evolving from a man that was ashamed of his people to a man that recognizes their marginalization, and is willing to protect them at all costs.

Other characters that continue to drive the narrative of The Expanse this episode include the crew of the Rocinante and Chrisjen. As the crew of the Rocinante continues their quest for justice and redemption, their morality is tested and they are forced to walk in areas of gray. In fact, as the crew is drawn deeper into the protomolecule mess, the decisions they make will no doubt haunt them in the future. This is especially true for the captain of the Rocinante, Holden. During the Eros mission, which is already complicated with its bombs, trajectories, and space walks, Holden is forced to make a difficult decision during an encounter with a medical ship docked on the asteroid. It’s discovered that the doctors of the medical ship breached one of Eros’ airlocks, exposing themselves to the protomolecule.  When they refuse to cooperate with Holden and his crew, revealing that their goal is to inform the solar system of the protomolecule’s existence, Holden is forced to shoot them down. This decision weighs heavily on Holden who has been trying to walk the moral high road since last season.

The debris from the destroyed medical ship plays a huge role in the episode’s narrative as it damages one of the bombs that Miller and the demolition crew dispersed along the surface of the asteroid. Because of this damage, Miller has to stay behind to make sure the bomb doesn’t go off before it’s supposed to. His willingness to sacrifice himself for the greater good is touching, and it seems likely that it will change how Holden feels about him.

In this episode, Chrisjen is playing a dangerous game of political poker having relocated a damaged stealth ship, implicating Protogen Founder Jules Mao. Additionally,  Chrisjen figures out that Protogen was working on Phoebe, the station that was blown to bits by the Martians several episodes back. Chrisjen’s guile and ability to navigate the corruption in her government leads to some excellent choices, one of which involves towing the stealth ship into a UN shipping lane, resulting in Protogen’s assets being frozen while an investigation is launched. Chrisjen, as usual, proves that she is a master at her craft.

Despite all the action and political drama this episode, the real show stopper of “Godspeed” was the protomolecule. The protomolecule, which ended up moving Eros out of the path of the approaching Mormon ship, proved that it can anticipate and evade threats, making it an extremely powerful and dangerous antagonist. This new development establishes an inescapable truth; it’s going to be hard as hell to kill this extrasolar threat.

Here’s to another brilliant episode.