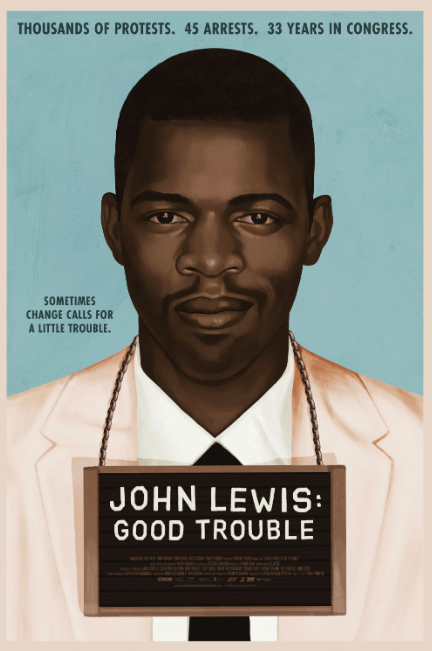 Historically, humans have been notorious for dispensing honors to individuals who have transitioned on.

Flowers, medals, and statuary commemorate an individual’s achievement and life, often given out after a person’s death. Let me be the first to welcome a more positive shift as brought forth in the documentary Good Trouble, a documentary on the life of Civil Rights icon and United States Representative John Lewis. The documentary was directed by Dawn Porter, who co-produced with Laura Michalchyshyn, Erika Alexander, and Ben Arnon. And at this moment, this the best trouble anyone will be able to get into.

History nerds will be immune to any spoilers mentioned here. The only other disclaimer that I will invoke is that you should have Kleenex close by when watching this film. The deep dive into the life of Rep. Lewis, as with most icons, does not start with the moment he gained notoriety. Most storytellers will tell you to begin at the beginning. The creators of this film do this effortlessly. Through interviews with friends, family, and Rep. Lewis himself, you are transported back through to the Jim Crow South. You are then walked back into the here and now mainly by Rep. Lewis himself but with a stellar entourage of individuals from Martin Luther King to Julian Bond.

For some of us, it’s a step back to our childhood. For a lot of us, it resonates powerfully because his story is our story. Instead relying solely on outside recollections of what Rep. Lewis experienced, this film relies heavily on him telling his own story and speaking his own truth. It makes for the most compelling retelling of those days of fighting for Civil Rights up to today.

While the movie takes you on that deep dive into Rep. Lewis’s life, you soon realize how integral and vital his story is to the Civil Rights struggle and how incredibly relevant it is in view of current events in the United States today. From the Edmund Pettus Bridge to the halls of Congress, you are taken through time to witness the evolution of the fight and struggle for rights for those who are disenfranchised in this country. However, the story does not even begin to stop there. Rep. Lewis has worked tirelessly throughout his career to create legislation that ensures that the least of us are treated fairly and are included in this “democracy” that we lay claim to.

Watching this movie, I was reminded of a conversation with a educator friend, who taught me that students learn differently. Some will be able to read about things and get it, and some need visuals to make things clear. If I were an educator, this movie would be a required part of lesson plans covering Civil Rights, social justice, and especially African American history.

Definitely not in the vein of a salacious tell-all, but more in the spirit of enlightenment across culture and history, this film nails it. It is very clear watching this that they get it. The stories of people like John Lewis need to be told, especially right now, as we struggle to get through a pandemic that has had the unfortunate propensity to disproportionately affect African Americans, Latinos, and minorities in underserved communities — the least of these. At the same time we are also facing the biggest threat to our democracy since the Civil War. This documentary is a primer for what to do and how to do it.

If I hit the lotto before this film’s public release, I promise to secure at least one large viewing space and invite as many as it will hold to come and watch and then discuss the issues brought forth in this movie — social distancing notwithstanding of course. Special preference would be given to young people, many of whom don’t know much about Rep. Lewis or the intricacies surrounding the struggle for Civil Rights, which goes on to this very day.

One thing is for sure, the story about a person’s life takes on a different level of gravitas when the subject matter is so vitally important and it is told by the person who lived it. There are moments in the film where you can see that Rep. Lewis, in relating a particular story, is enmeshed in a memory, all too often a painful one.

We so needed this story right now, coincidence be damned. We need to be reminded that no matter what, when we can come together with a commitment to make things better, there is nothing we cannot do and or achieve. The hope and faith of those who came before us, which allowed them to put their lives on the line time and time again so that we wouldn’t have to, will not be in vain. In one of life’s great ironies, an opportunity is presented by a global pandemic to illustrate in terms of viewership what is import, what we will not forget, and what we need to teach our children each and every day.