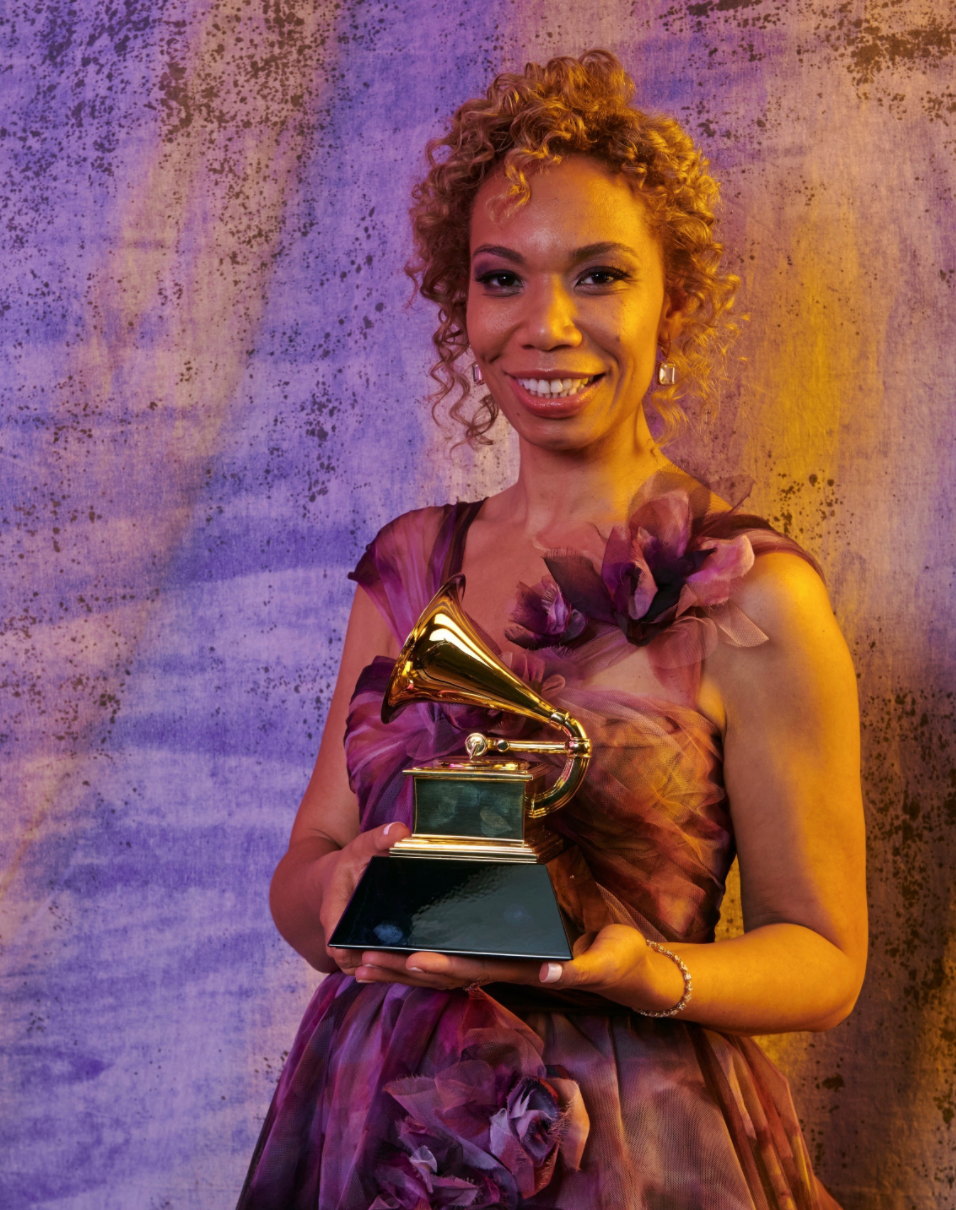 Songwriter Autumn Rowe has won her first Grammy for Album of the Year with Jon Batiste for We Are. The last Black artist to win this category was in 2008. Rowe has collaborated with Zendaya, Dua Lipa, Avicii, and more. She was the vocal coach on America’s Got Talent for several seasons and is a self-taught DJ. BGN spoke with Autumn Rowe via zoom shortly after the Grammys about this incredible accomplishment.

Congratulations on your Grammy. How are you feeling?

Grateful. Seeing people discover Jon, I feel like a proud mom in a weird way. I’m really excited that musicianship is being appreciated.

If you only had one word, to sum up, your Grammy experience, what would it be?

Perseverance. I grew up in the South Bronx in the projects. I grew up very, very poor. Where I come from, you hear gunshots every night. There aren’t a lot of opportunities for girls like me. So this was a very long road.

I was about five or six years old when I said I would be a writer. I didn’t know that meant: songwriter. I knew I could write. I had a lot of expression in me. We don’t have enough time in the day to go through the number of obstacles, but perseverance is what got me here today. I don’t think I’m the most talented person, but I don’t give up. That’s got me through this far, despite it all.

You met Jon through Instagram. How did that happen?

Because I am a DM and tap a woman! (Laughing)

I’m outgoing. I go up to artists in the street. I don’t care who you are. I’ll go up to Beyonce. I’m bold. I’m like YOU!!! I have straightforward energy. Jon and I worked on a song called Sing, which is on the album Before We Met. When I heard what Jon did on it, I felt like it was the best record I’ve ever been a part of. All I heard was his voice and the production. I was so impressed. I called everyone and was like: I just heard the best record I’ve ever been a part of. I don’t know who this artist is, but he is my muse. He is who I’ve been looking for. I gotta find this man.

It took me months to track him down. I found him on social media, and then it took months for him to see my DM. The second I landed in New York City, on a quick 36-hour trip to surprise my mom, he DMS me. It’s an insane story. I’m not making this up, I couldn’t believe it. I was like, “Oh, wow. Hey, so can we meet up?” We met up the next day and started playing each other a bunch of songs and talking about how we had just so much in common musically.

We pulled from so many of the same places and felt this musical connection. I felt like I just had to make music with you. I felt spiritually pulled to this. There’s a lot of music I have inside of me that I haven’t had the artists to get it out with because pop music has a lot of boundaries and genres. Jon is limitless and a genius musician.

You’ve collaborated with some very well-known musicians. What are the most memorable lessons you’ve learned through the process?

Songwriting is an act of service. People don’t realize it’s literally a service job where you show up and help people. My job is to help artists show the world the best version of themselves. I love making records that are identity records. At best, it would be something I made up that’s basically a record only they can sing. A record that will give them longevity and identity towards who they are as an artist, instead of one that is interchangeable.

It takes a lot of energy to see inside someone’s soul and put that into a song. Mind you, I only have five to eight hours with an artist. One of the lessons is to be careful not to burn out.  For a lot of my career, I was incredibly burnt out, overworked, and wasn’t enjoying it. I didn’t realize it because it just became a feeling of normal. It was normal to feel bad. I had to take a step away.

As a vocal coach, what is the most important thing a singer can do to take care of their voice?

Listen to your body and treat it with respect. The voice is a human instrument. It’s connected to your whole body. If you’re dehydrated, your voice is not going to work properly. Not everyone can eat dairy and sing. Not everyone can drink alcohol and sing. Really pay attention to what’s working for you and what’s not because it does affect your vocals.

As a songwriter, what is your favorite aspect of the creative process?

The magic in the room when you feel like you struck gold. You know when you write that song because it doesn’t happen often. When you hit it, it’s a magical euphoric feeling of joy. When all the combinations of the chords, the drums, the melody, the lyrics, and the vocal all line up you feel like they’re like the Infinity Stones, you could say, but in a good way. It’s a magical feeling. Because you’re like, oh, yeah, that’s why we do this.

What’s next on the horizon for you?

I want to use my platform to make a change in the industry. I want to open the doors to more women. The fact is, less than 3% of popular songs are produced by women, and about 12% are written by women. Where the industry is headed right now and how creatives are paid, songwriting is going to become something for privileged backgrounds because you’re only going to be able to afford to make music if you come from money where it’s headed.

What that does is eliminate many people of color, specifically Black people. And that is incredibly dangerous because then we lose culture. I met with Congress on Saturday, and I did a demonstration of how we make music. I want little girls right now from the South Bronx to be able to write songs. We have to make that possible. And, musicians need to be able to make a living wage.

What right now is bringing you joy?
The Marvel universe. My friends and I are gonna rent the movie theater to watch Morbius. That, to me, is joy. I’m so excited!