At 12-years-old, Conor O’Malley (Lewis MacDougall) is about to escape into a fantastical world of monsters and fairy tales. He is dealing with his Mum’s (Felicity Jones) terminal illness, which has necessitated Conor spending time with his grandmother (Sigourney Weaver). His daily existence at school is one of academic disinterest and classmates constantly bullying him.

Through all of this stress, he unexpectedly summons an ally who bursts forth with terrifying magnificence. From the Earth, an ancient yew tree creature emerges and appears every night at Conor’s window at 12:07. The Monster (Liam Neeson) has stories to tell, and he insists that Conor hear and visualize them. Once he tells his tales, the Monster demands that Conor tell a story of his own, which must contain his truth.

A Monster Calls is a film about the loving relationship between a mother and son and how he deals with losing her. Of course, Conor wants his mother to live; he seeks to find a cure for her illness. However, he’s smart and knows deep down that she isn’t going to make it. With Conor as the film’s centerpiece, the audience is forced to experience his pain and anguish every step of the way.

He’s angry, hurting, and lashing out. Depression sends Conor into a tailspin, and this is what sparks the appearance of the Monster who is the highlight of the film. His voice, his look, and his message are the glue that keeps this movie from falling down a bottomless rabbit hole of despair. It’s the much-needed bit of hope for those of us watching this story unfold. 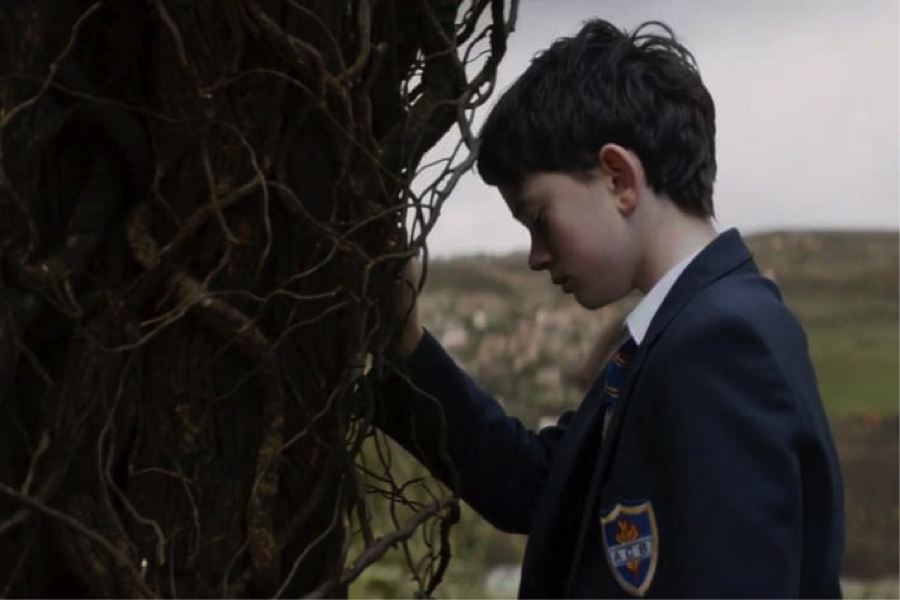 What’s refreshing is that the use of CGI is minimal, but well utilized. I wasn’t sure what to expect. I didn’t want to see something Lord of The Rings-style. What I got was a Monster who is jarring to look at, a bit creepy, but also endearing and protective.

It’s hard to determine which performances stood out, due to the heavy subject matter. Still, Sigourney Weaver did catch me off guard with her posh British accent and motherly persona. I enjoyed seeing her placed in a role that is something other than a bitchy antagonist.

Throughout the movie, Conor goes through the five stages of loss: denial, anger, bargaining, depression, and acceptance. His process acts as a reminder that, as loved ones approach their final moments, we assume they are aware of their impending death, but those of us on the outside are in denial.

“This isn’t happening,” or “Why is this happening,” is Conor’s response. He doesn’t understand that his overwhelming emotions are a normal reaction. He has to learn to be brave through this ordeal, as his Dad (Toby Kebbell) continually reminds him that bravery is what will help him through this.

Bravery can be the defense mechanism that buffers the immediate response to losing someone. Conor deflects from his vulnerable core, redirecting until he’s expressing anger instead. This anger is common and can be aimed at inanimate objects, complete strangers, friends or family. Anger may even be directed at the dying or deceased loved one. There is a particular scene that portrays Conor decimating an entire room of valuables in his Grandma’s home. He doesn’t even realize what he is doing until he snaps out of his episode. It’s heartbreaking to watch.

By the end, Conor admits that he is ready for the anguish to be over; over for his mother, and over for himself. This is a very hard affirmation to verbalize and accept.

Think about it; if you were watching someone you love suffering, wouldn’t you want them to find peace? If you have never lost someone, this may be hard to understand, but the death of a loved one takes its toll on everyone, especially children.  One thing that Conor’s family should have remembered is, during the grieving period, children’s sovereignty should remain intact. They are smarter than they are given credit for and deserve understanding.

Ultimately, however, experiencing the death of a loved one isn’t the end. It can be the beginning of a new life. One has to repair and move on. By the film’s conclusion, Conor has accepted his new chapter and is willing to compromise with those around him after the death of his mother.