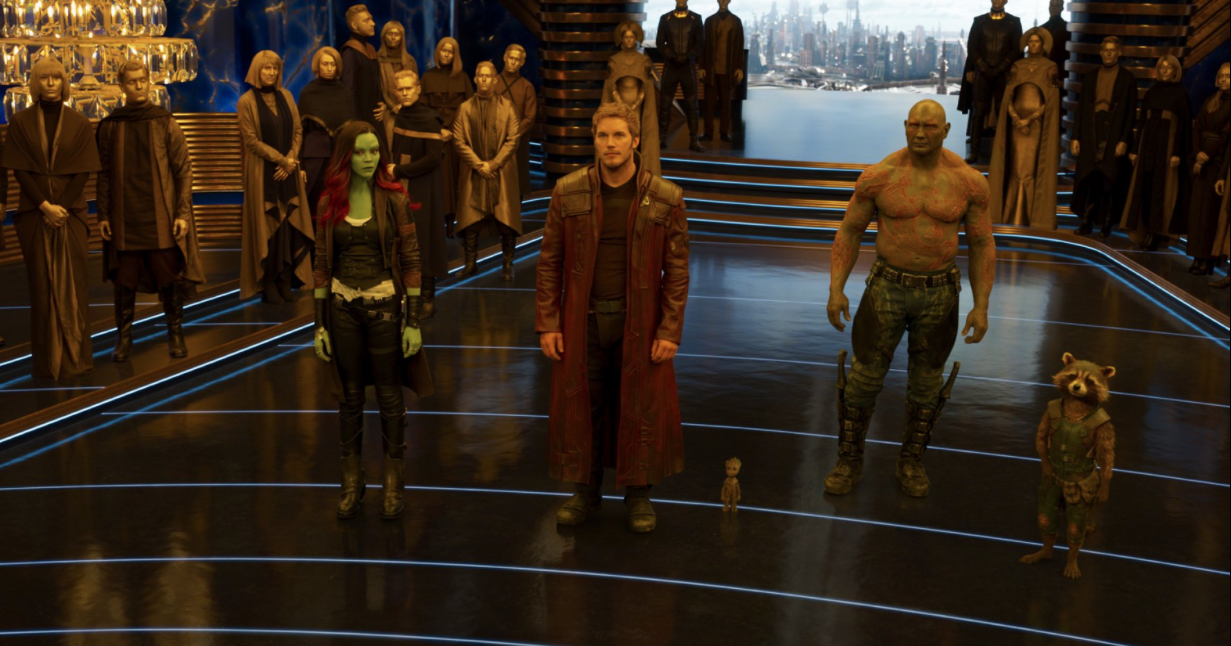 The Guardians of the Galaxy Vol 2 is a perfect sequel to the 2014 smash hit. Director, James Gunn, doesn’t try to outdo his first run. Avoiding the pitfalls of old jokes, and tasteless cameos Gunn instead mined the Marvel universe for ways to bring the Guardian’s closer to the rest of the MCU and explores the struggles of a newly minted team.

The film opens on our heroes working in near perfect unison to take down a sticky and oddly thick-skinned beast. The audience experiences the fight from baby Groot’s (Vin Diesel) perspective. No longer the potted newborn, Groot is now an adventurous toddler with opinions and thoughts of his own. The opening of Guardians of the Galaxy is a wildly dizzying ride and the perfect way to set the tone for the rest of the film. 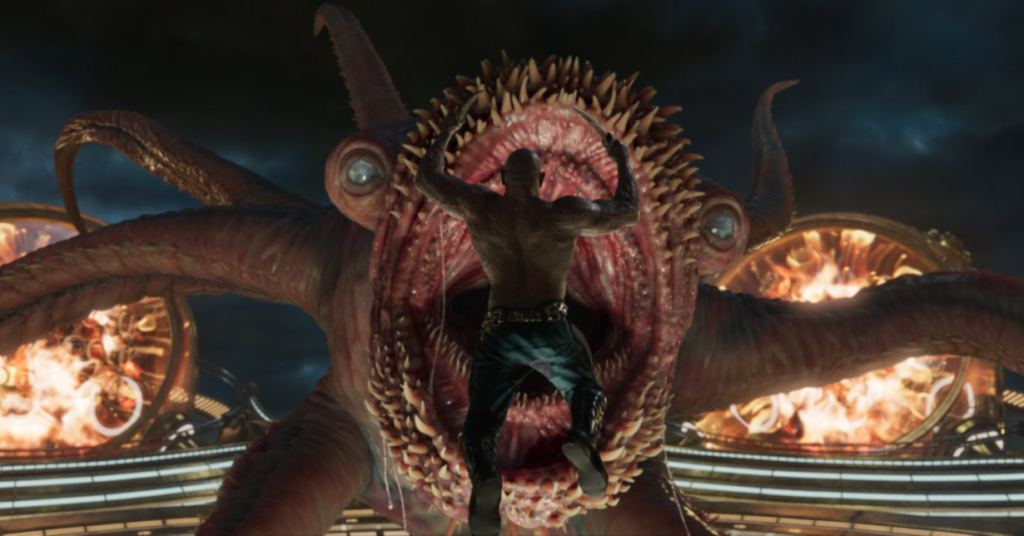 Like the end of that whole first semester, this freshman team has been living in a precarious state of being. They are just friendly enough, smart enough, and talented enough to get the job done. But, under that are a bunch of individuals still trying to cope with past traumas.

Rocket Racoon (Performed by Sean Gunn, voiced by Bradley Cooper) is still thinking like a lone wolf. Grabbing whatever he might need to survive, including batteries from a very particular client, Ayesha (Elizabeth Debicki). Gamora (Zoe Saldana) wouldn’t say she has a problem, but she’s scoured the cosmos to win her sister back. Not so she can help her, but so she can reap the bounty on her head. When her sister is turned over to the authorities, Gamora plans to run from Thanos forever stating she does not think it possible for him to die. 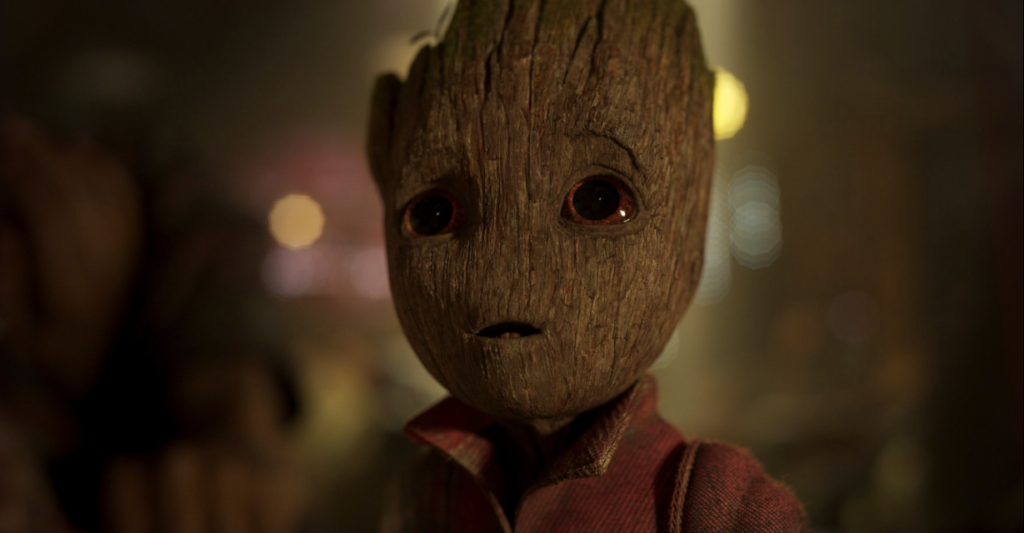 Drax (Dave Bautista) has not yet learned to think with the team. Running off and getting himself into dangerous situations means the team is often forced to follow after him. Finally, Star-Lord (Chris Pratt) has the same issue as every superhero in the MCU. The absence of a father can leave a dark void in a child’s heart. Star-Lord is nothing but an oversized man-child. When a god saves him and his crew from a retaliating client, Gamora convinces Peter to go back find out what he can. “If he’s lying we’ll kill him,” she says.

This decision splits the team sending Drax, Gamora, and Star-Lord to a distant planet while Rocket Racoon, Groot, and a captured Nebula (Karen Gillan) to hold down the ship. Space Pirate, Yondu (Michael Rooker), then captures the crew and is eventually mutinied and captured by his team. 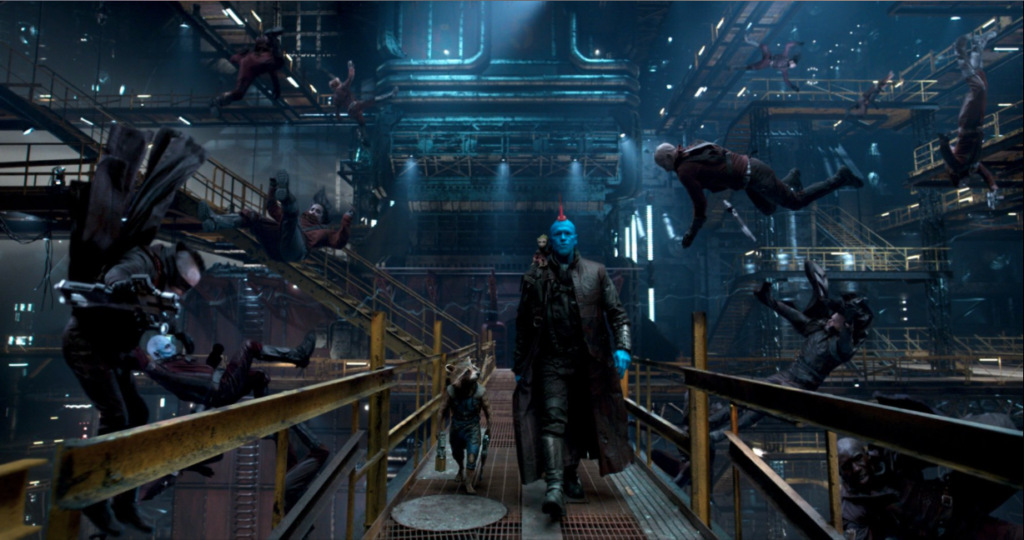 From there, the team must fight their way back to one another. Gunn weaves an impossibly tight story for Guardians of the Galaxy Vol 2 ala The Russo Brothers for Captain America: Civil War. Each team member grows or resolves his or her issue in a way that feels neither contrived nor forced. To the point where I found myself caring for characters, I’d barely noticed in the first film. 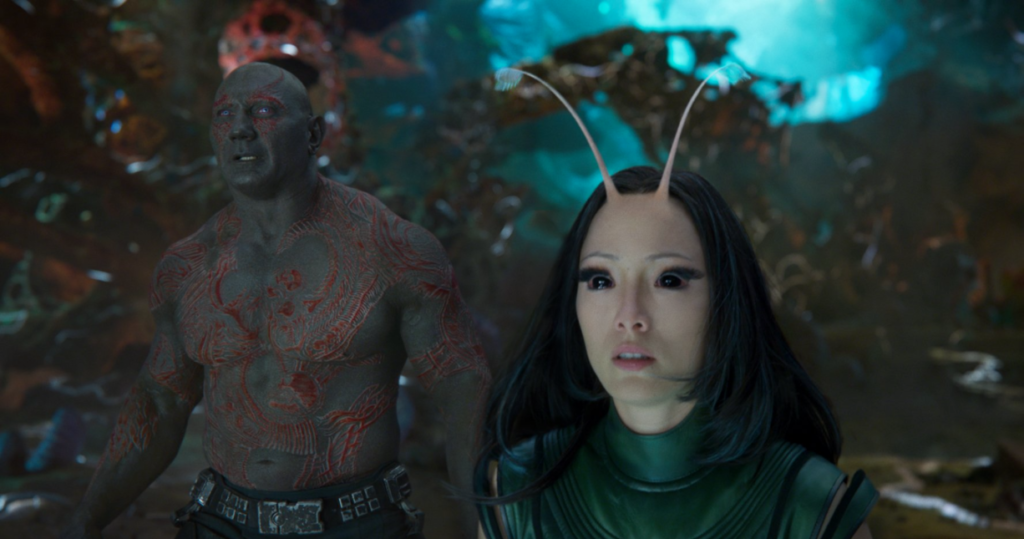 Debicki and Pom Klementieff also gave spectacular performances. The latter of which plays an empath named Manith. Manith is perhaps my new favorite character of the series. I was afraid she might fall into the racist stereotype of quiet, subservient Asian. In fact, she might. I’m looking forward to hearing from the community. But her journey from emotionally and mentally abused caregiver to a full-fledged team member resonated with me. By the way, Manith will be making an appearance in Infinity War.

Yes, the Guardians are getting closer to the rest of our heroes, and there are hints dribbled throughout the movie in the form of really cool cameos. If you’d like to avoid minor spoilers skip down to the closing paragraph. 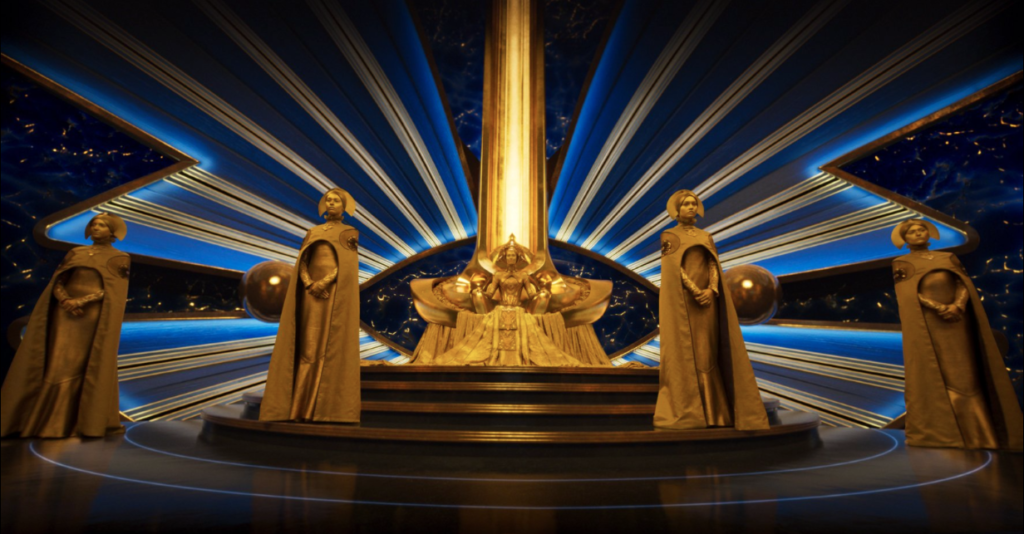 Howard the mother-fucking Duck makes an appearance, and it is pure fandom gold. At the L.A. press junket, a reporter asked Producer Kevin Feige when we could expect Howard to have his film. Feige did not give a clear answer so start filling in those petition.org documents now.

Feige was willing to settle one question Marvel fans have had for years. Stan Lee’s character throughout every MCU film is one individual, and we may be learning more about why he’s so close to the action soon. In Vol 2 Lee is seen talking with the Watchers. No word yet if one of those Watchers was Uatu. 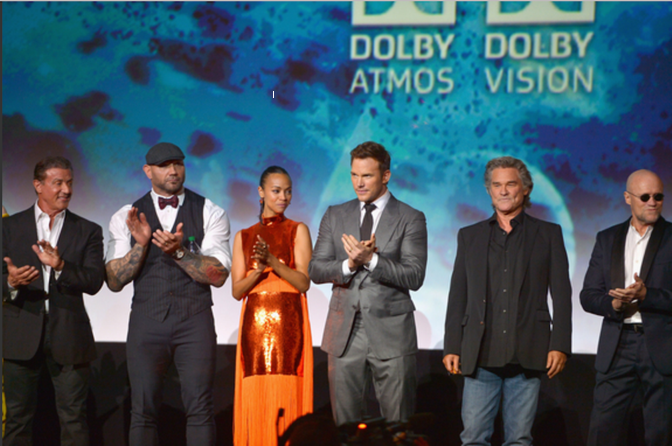 Special cameos, bright space explosions, a kick-ass soundtrack and Chris Pratt’s abs make Guardians of the Galaxy a film worth exploring. Not a perfect movie, but an excellent sequel. You’ll love how the characters have grown, and you’ll leave excited for the third. I’m giving Vol 2 3.5 out of 5 stars.