The short film made its premiere this past weekend at Coachella, before Childish Gambino — Glover’s alter ego, took center stage.

The 55-minute romantic thriller opens with co-star Rihanna narrating a bright and whimsical 2D animation scene. The introduction gives the viewer the background of the island. Stating how the seven gods of the seven lands created the dueling truths: love and war. We are introduced to Rihanna’s character Kofi, a young dreamer who yearns to depart the island and travel the world. Deni, played by Donald Glover is a visionary with his God-given talent of music. Unlike Kofi, Deni wants to stay and build up his community on the island. 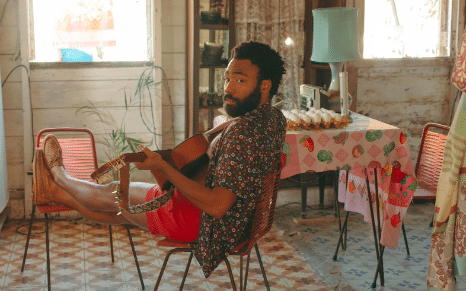 Glover’s character works part-time at the main radio station and full time at a warehouse run by the antagonist Red Cargo, played by Nonso Anozie. He is the island dictator and money hungry bully. He is feared by most on the island and uses his military presence to keep the hard working people of Guava at bay. Donald’s character is constantly testing Reds patience by showing up to work late all while planning a night music festival.

The music festival would mean the people of the island would miss work Sunday, which is unacceptable in Red’s eyes. Red offers Deni $10,000 in cash to cancel the festival on the radio or there will be consequences. “I have to do what’s best for everyone,” Says Red. Deni rebuttals with, “Yeah, but how do you know what’s best for everyone?”  Red ironically has a caged bird in his office, that Deni makes eye contact with during their meeting. Like the bird, Red wants to cage in Deni’s free spirit, before he reaches the minds of the locals.

Deni’s heart is set on uniting the people of the island through music and love. His mission is to uplift his community, in hopes that they are inspired enough to break free from the chains of capitalism and finally enjoy the paradise around them.

“We live in a paradise, but we never have the time to enjoy it.” Glover’s character says this to Rihanna as they walk along the beaches shores.

Deni is loved and respected throughout the island. He not only offers his musical talent but his ability to be unapologetic. He is the match that may soon ignite a revolution. 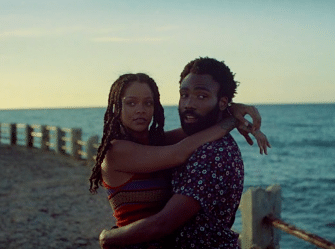 A scene that captured my attention was in Red’s warehouse, where Deni is late once again. He strolls in casually with his guitar, while one of his co-workers says, “You know Red’s going to get you if you keep coming late.” Deni had asked that all his co-workers come in an hour later to preserve their energy for tonight’s Festival, but no one had obliged.  “It’s not late if everyone does it,” he says.

Deni doesn’t recognize the consequences. He voices his opinion often that they should not be working on the weekends. As Deni makes his way to his station another coworker is caught boasting about leaving the island, to start a business in America. Glover’s character lets out a snarky laugh at the comment and tells his coworkers that Guava is no different than America or any other country. America, much like in Guava, you’d still be making money for other people.

Guava Island beautifully remastered some of Childish Gambino’s major hits like This Is America and Feels Like Summer. The project brings us on a musical rollercoaster throughout. It will have the audience laughing, singing and even tearing up during some scenes. Well done Donald Glover, I tip my hat to you. He is proving to be a force not only in the music realm but in film as well.

Check out a short clip from the film below.

‘The Lion King’ Review: Some Animated Classics Should Just Be Left Alone