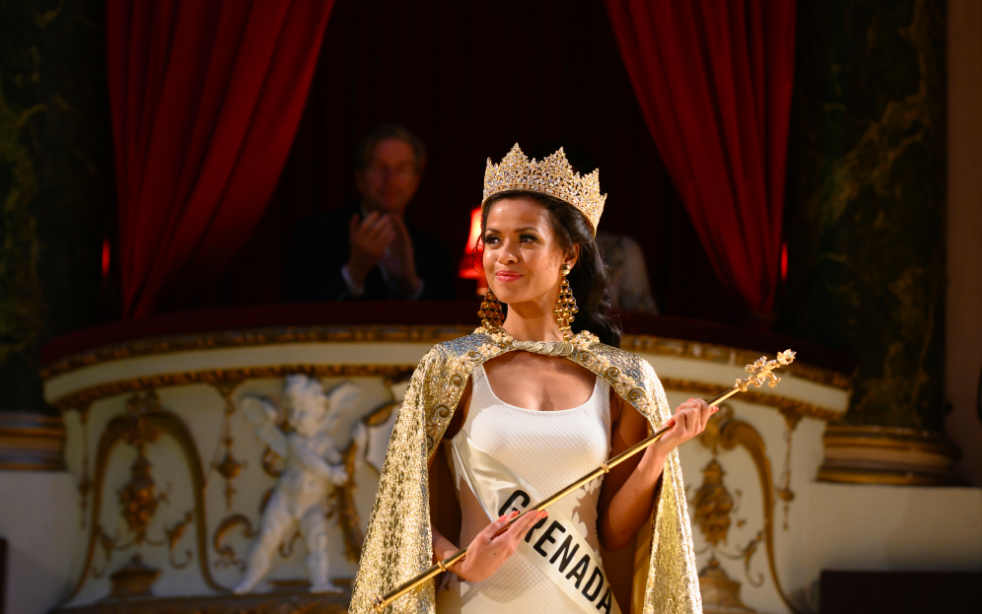 One of the most historic moments on national television occurred during the 1970 Miss World contest, which made headlines all over the world. Witnessed by over 100 million viewers, rabble-rousers, as part of the nascent Women’s Liberation Movement, interrupted the show. Philippa Lowthorpe’s film Misbehaviour examines this real-life story and the women behind it.

Jennifer Hosten, played by the illustrious Gugu Mbatha-Raw, competed that year as Miss Grenada. It was a long shot competing back then in a Miss World competition filled with other contestants who upheld European beauty standards, which was the status quo. In one of the most unexpected moments in the history of Miss World, Miss Grenada became the first Black woman to receive the prestigious crown.

BGN had the opportunity to speak to Gugu Mbatha-Raw over the phone about her latest role in Misbehaviour as well as the role of where the feminism movement stands today.

Mbatha-Raw had the rare opportunity to spend time with the very woman she was to portray on the big screen: Miss Grenada herself, Jennifer Hosten. The two exchanged emails — Hosten lives in Toronto and Mbatha-Raw lives in London. Shortly after speaking over the phone, Mbatha-Raw had the idea that they should meet in Grenada. “I’ve never been to Grenada Island,” she says.

Mbatha-Raw took her mom, and Hosten took her daughter. They made a beautiful vacation out of it. Mbatha-Raw also learned and explored more about the character she was soon to play while experiencing the rich tapestry of the island. A side benefit was getting a deeper understanding of Hosten’s Grenadian accent while staying there. For Mbatha-Raw, this was a special experience because although Misbehaviour was filmed in London, she had these beautiful native memories from Grenada to remember and to put into practice during filming.

Hosten was hailed as a national hero in Grenada. She went on to study political science and international relations at university before becoming the Grenadian High Commissioner to Canada.

Sally Alexander (Kiera Knightley) is one of the lead protestors that fateful night at the Miss World pageant that disrupts the competition and is part of the Women’s Liberation Movement. While the film Misbehaviour does frame the story around Sally, it should be noted that during the ’70s, Women’s Liberation was very much a white women’s movement. In fact, the idea of intersectional feminism was an anomaly and not the term that we have come to know today. “Jennifer, too, was breaking boundaries in her own way,” Mbatha-Raw says. “[Jennifer] was becoming an icon for women of color.”

While the white women were disrupting this pageant for the sake of fighting against sexism and dismantling patriarchal traditions, seeing a Miss Grenada or Miss Africa South (Loreece Harrison) on TV for many young Black women and girls was inspiring. For this audience, they were hungry for this moment and yearned to see these women on stage because they were reflections of not only women who looked like them, but women they wanted to be.

Misbehaviour dazzles the viewer with some impressive costumes and fashion wear from the 1970s. While Mbatha-Raw didn’t get to take home the studded Miss World crown she gets to wear in the film as a souvenir, she did get to wear one of the real gowns Miss Grenada wore, lent by Jennifer Hosten herself. “The gold crochet dress that I wear very briefly in the film that you see in the poster, that was really special,” Mbatha-Raw confesses. “Jenniver kept it all the time in a shoebox and sent it to the costume designer in London.” The dress was made by a Trinidadian designer. For Mbatha-Raw, to have that in the film was really special.

Gugu Mbatha-Raw has played some of the most fully fleshed out and complicated characters on the big and small screen. I asked her, from her early start as the leading role in the British period drama Belle to her most recent appearance in The Morning Show, are these roles intentional or the luck-of-the-draw?

Mbatha-Raw’s answer is simple: “We are all complicated multifaceted human beings, so I tend to gravitate towards characters where I can explore those layers.”

Expect to see that three-dimensional complexity in Mbatha-Raw’s role for this film too, especially in her favorite scene (which just so happens to be this writer’s favorite scene as well). Without spoiling and unpacking too much, there is a moment that is shared between Mbatha-Raw and actor Kiera Knightley in the powder room backstage during the pageant.

It’s a poignant moment of the film because Hosten confronts Alexander about her kind of feminism. Any feminism movement without intersectionality doesn’t represent all women. The term “feminism” has become elusive and means different things to different people depending on who you talk to. When asked what feminism means to her, Mbatha-Raw says, “For me it just really means that men and women are of equal value in society and should have equal rights.”

Equality is the way the world should be, indeed.