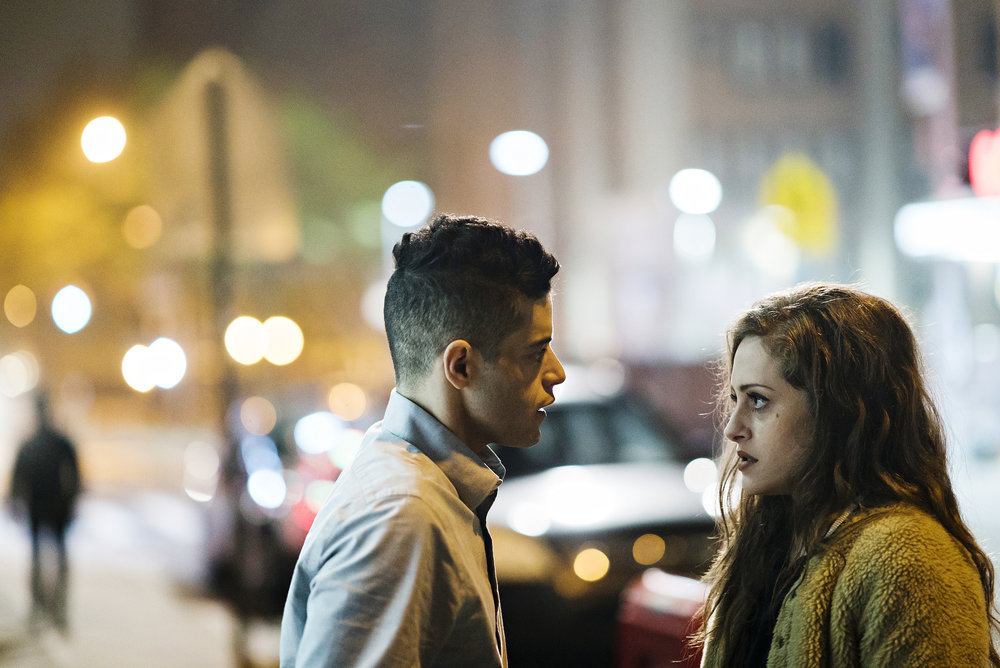 How’s your week so far? So much happening between Whiterose, Stage 2, Mr. Robot needing a reboot and more!  Hope you have a moment to breathe and relax because this week’s Mr. Robot recap is even more intense than last week.  This ride just keeps getting crazier and crazier!  Remember how last week it was all about a bearded, shirtless Tyrell?  Well, we’ve got some surprises to tell you about on this week’s recap!

We open with Darlene wearing her heart-shaped sunglasses on the subway train.  Her glasses are like Elliot’s black hoodie, it is her personal signature. She meets a young girl who has apparently picked her wallet and Darlene surprises her when she asks for her wallet back.  The Five/Nine hack has already occurred at this point in the narrative and she tells the girl that she already has stolen from her before she pickpocketed her. The hack is Darlene’s way of explaining how she’s stolen from everyone. She then admits to the naive thief that she killed a woman.  It’s at this point we realize that Darlene’s guilty conscience is eating at her.

Dominique walks into the stakeout house which is Darlene’s safe house and it appears she’s being followed by Elliot. Elliot goes through Darlene’s mail. He’s searching for metadata—the story behind the data. Elliot must have phished Dominique when she visited the URL. She places a call to Darlene, but Darlene left her cell in the house.  During the whole time of this surveillance, they see Elliot perusing Darlene’s place and Darlene is walking outside to her apartment.  This could compromise their lead asset, Darlene, if Elliot finds out.  Dominique thinks quickly and walks outside to tell Darlene they have been phished and not to blow their cover.

Darlene walks in to see a creepy Elliot sitting at the dining room table.  He questions how Darlene can afford an apartment and when she got it.  He tells Darlene to come with him to which she refuses.  During this time Elliot is using a voice protector so the surveillance cannot pick up his audio. At this moment, Darlene doesn’t know if its Elliot or Mr. Robot she’s talking to right now, she only knows that he can’t be trusted.

We cut to Irving having a meal at Red Wheelbarrow with Angela. Irving informs Angela that the deadline for the next hack is in 10 days. Angela wants assurance that no one will be in the building when they go and that an emergency evacuation will be in place.  Irving states that as long as everything is on schedule, all will be good.

Back to Elliot and Darlene, they both discuss how Stage 2 was never called off and how they suspect Tyrell is also behind the hack. When Darlene realizes that Elliot has been monitoring them and hasn’t yet turned them into authorities, she asks why. Elliot discloses that he wants to be the one that finds them and sees where it leads. They then walk into an abandoned apartment that once belonged to Shayla.  The landlord never changed the locks and Elliot still has the keys from when they were together.  Darlene then tells Elliot she will join him to hunt down Tyrell.

We see a sweaty guy eating Fruity Pebbles in front of his TV and suddenly hear some activity outside.  A SWAT team barges into his home and he kneels with his hands behind his head wearing an F-Society mask. The man is later questioned by Dominique who knows that he responsible for leaking the F-Society video. When Dominique asks him who he works for, he reluctantly says, “F-Society.”

While taking Flipper out for a walk, Darlene and Elliot make a vengeance pact.  If either of them dies, the other will have to avenge their death. Darlene sees Elliot leave his apartment at 1:48 AM, but realizes it’s actually Mr. Robot leaving the apartment. Darlene follows him and sees Mr. Robot chatting with Angela and is completely shocked by this.

In the following scene, Angela tells Tyrell that Elliot has been re-routing the paper deliveries all over the country and they never made their destination. To which this revelation infuriates Tyrell. Apparently, Mr. Robot has snitched on Elliot to both Angela and Tyrell. Tyrell then threatens to expose Elliot to the Dark Army, but Angela quickly shuts him down on the risks involved with letting them know.

Tyrell enrages Mr. Robot which triggers his personality split and Elliot emerges.  He’s confused why he’s in a room with Tyrell and Angela.  Angela then grabs a syringe and sedates him.

Dominique meets with Darlene at a bar.  Dominique demands information on their intel project together and what Elliot and Darlene talked about at the safe house. Darlene then reveals to Dominique how she has no social life or friends and begins to probe into Dominique’s personal life by asking a round of questions about where’s she’s from and what’s her relationship status.  When Darlene discovers through the use of Dominique’s absence of male pronouns about whom Dominique is dating, she discovers that the agent is a lesbian. Darlene then demands moving forward she’s going to need a wire for her protection.

Next, we move to Tyrell and Irving.  Tyrell states he refuses and to work with Elliot and Irving calmly tries to reason with him. Tyrell asks for an extension on the deadline and Irving insists that Whiterose will change her schedule.

In the following scene, Angela places a call to Phillip Price, CEO of ECorp and asks him to fire Elliot.  Phillip asks why, and Angela elects to be discreet about her reasons, but affirms that she will return the favor. Phillip agrees to move forward with Angela’s request.

Angela has Mr. Robot in her apartment who’s woken up from sedation.  He’s now paranoid because Elliot saw Tyrell and Angela. He also doesn’t know when Elliot will wake up again. Angela then receives a text from Irving stating they will be ready to go on Monday.

Darlene then walks into Elliot’s apartment and places a Polaroid photo the Alderson family.

How was this week’s episode?  The pacing was a bit slower this week, but we still uncovered more clues of the moments leading up to Stage 2 which has me on the edge of my seat!

Quotes of the night!

“Getting information is one thing, but how it was created, where and by whom can often be illuminating” – Elliot

“Listen to me you Swedish scumfuck!” – Mr. Robot