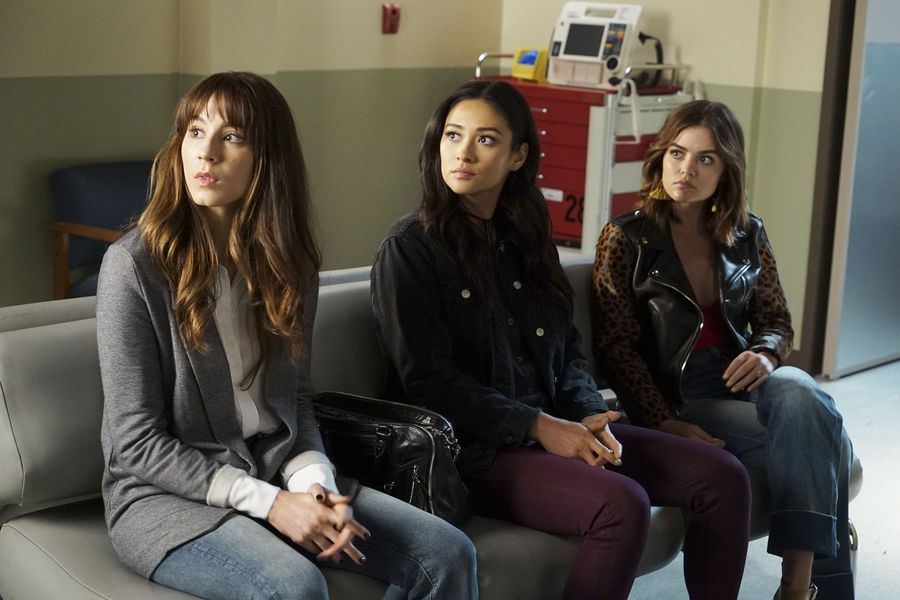 I’ll begin this week’s Pretty Little Liars review by saying that death is not funny. And will never be funny. People dying is sad. It’s perhaps even sadder when a person is young and in love and newly married. But it’s so, so funny when it happens on Pretty Little Liars. I earlier speculated that Yvonne couldn’t possibly die because then how could the show allow Spencer and Toby to reunite under such tacky circumstances? But I forgot that this is the same show that hooked Spencer and Caleb up only to end their relationship with Caleb cheating on her with Hanna so tacky is PLL’s bread and butter.

So, of course, Yvonne dies of some mysterious ailment, drifting away after assuring Toby she’s “the happiest.” I admit my medical expertise begins and ends with Grey’s Anatomy, but that’s more than PLL has (all they’ve got is “medically-induced coma” and the “medically-induced” part seems confusing for them). I’d bet money Yvonne’s death certificate simply reads “car crash.”

This is disappointing because I’m desperate for some forward motion from this show, and Spencer pursuing a potentially happily ever after with Marco (while Toby and Yvonne tie the knot) is everything I’ve ever wanted. Marco is sweet, has a job, and takes Spencer out for a day of ping pong and cuteness. In other words, he’s so normal someone will probably accuse him of being A.D soon. At the very least, Toby grieving in Spencer’s arms doesn’t bode well for her future with Marco.

But even if Spencer’s (and Aria’s, and Hanna’s, and Emily’s) romantic life is going to stay in high school, at least A.D continues to level up. There’s been some creepy stuff on this show over the years, and the longer it goes the more disturbing it gets (Alison literally marrying her tormentor is pretty damn horrific, and we can’t forget about Cece’s dollhouse). Now that it’s Hanna’s turn to play the game, A.D deposits a life-size mannequin on her doorstep. It talks, has Hanna’s face sewn onto it, and it bleeds (ew) when Hanna cuts it open to find a too-short, too-offensive dress meant to derail her investor meeting.

You’d think this meant Hanna had a lot to do this week, but you’d also be wrong because she only gets to be scared and sad and scared again with an earnest friendship moment with Lucas tossed in, too. It’s a pretty good episode for Ashley Benson performance wise (and her mumbling is at a minimum), but I have a hard time believing Hanna would take a back seat while others do the heavy-lifting. Maybe last week’s brush with A.D got to her, but I’m not convinced PLL remembers what Hanna did last week (she’s really surprised her design is labeled stolen as if that wasn’t all she talked about last episode). It’s still a bummer for Hanna, who goes through all this (including Caleb being rushed to the hospital) only to be refused her puzzle piece because she didn’t make it to her meeting.

It’s Aria who stands out this week, joining Emily on their hunt for Sydney. She puts Ezra/Nicole on the backburner and becomes a kinda-hacker with some help from Caleb. She even remembers she took martial arts for a whole half a season and shoves Sydney around a bit. This is PLL at its best, remembering that these girls have been here and done all this, so there’s no reason they shouldn’t just roll up on high school rivals. The Liars seem to have gotten the memo that they need to pick up the pace, but I’m not a thousand percent certain the show has. By episode’s end, we’ve got zero new information (Sydney passing messages for Jenna doesn’t count), and the Liars learn what we already know about A.D recruiting Jenna. I just want to shove that Judge Judy tapping her watch GIF in Marlene King’s face and remind her we only have seven episodes left.

But always busy, and always moving forward, is A.D who sends Rosewood P.D a finger. So whose is it? It looked like a very masculine finger to me, but it’s also a dismembered finger on a Freeform show so it’s probably not that deep. Maybe it belongs to the still missing Mary Drake? Or perhaps to the oddly unreachable Ezra? Eh, probably not. This show would never even fake maim Ian Harding. But I’ve been wrong before. RIP Yvonne.