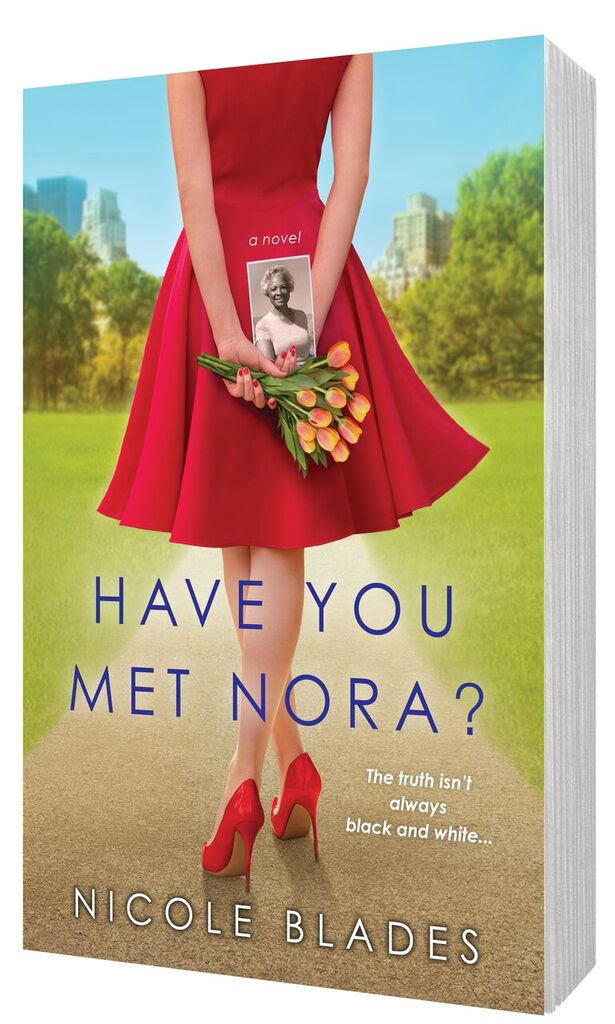 Have You Met Nora? is the new book by the author Nicole Blades. Nora Mackenzie is the woman who has it all. Well versed in her career as a top fashion stylist, she is weeks away from getting married to one of the wealthiest bachelors in NYC. In a life-changing moment, she finds herself having to face the reality of becoming a part of one of the richest, most powerful families by becoming Mrs. Beaumont and letting go of the name she has created–Nora Mackenzie. However, Nora has been omitting a significant part of her identity. What her fiancé and friends don’t know is she not white but bi-racial!

In flashback moments from her past, we learn that Nora’s mother was an employee for Dr. Bourdain and his wife. Her mom passes away from cancer, the Bourdains adopt her, and Mrs. Bourdain sends Nora away to a prestigious boarding school after deceptively knowing that her husband has been abusing Nora over the years. Mrs. Bourdain grooms Nora as a young, white lady, dying her hair blonde and sending her off to boarding school where she begins a new life passing as a white girl to finally finding some acceptance.

As her wedding day gets closer, a blast from Nora’s past shows up by the name of “Ghetto Dawn”. Dawn is a former classmate from Nora’s high school who found out she was bi-racial. To save herself from her identity being revealed, she gets Dawn kicked out by framing her as the school thief. Dawn is back for revenge and wants to ruin Nora’s perfect life.

As Nora begins to unravel (her real support system being only herself), she slowly starts to fall apart as she accepts there is no control over this deception she is living. Fighting her way through the pool of emotions, she has to figure out a way to stop Dawn before she ruins the life she has worked so hard to achieve.

Blades does a good job at manipulating your emotions and feelings about Nora. When her mother asks her to help with the laundry during her childhood, she comes across as a spoiled young lady. There is the initial assumption that she felt her skin color made her better than her mother, and she wanted to disassociate with her mother’s position in life as a maid. However, later on in the novel, the relationship between Nora and her mother is quite touching, and the fond moments Nora recalls of her mother’s endearing Bajan ways and quotes make it difficult to believe that she would throw away her mother’s memory in the way that she does.

The issues of race, culture, and class in Have you Met Nora? felt trivialized, and I struggled with the tone of the book. Little trinkets put into place particularly about race and class fell empty with no real in-depth examination. For example, I felt Nora’s mother being from Barbados and not African-American was significant to the ideas about colorism and culture that were deeply rooted in Nora’s character. I felt her wanting to visit the bakery that reminded her of her mother and her decision to not have household help and clean her own home were integral to her never actually shedding who she was.

For me, Nora and her friends’ personalities read as Black characters; there was an attitude or sass that felt distinctively Black. Maybe it was intentional, but in my mind, I had carved out a preppy Manhatten-esque tone particularly for her best friend, Jenna. This was something lacking in the author’s writing style–creating an authentic tone for essentially all white characters. Additionally, there were no racial or class undertones from her fiancés family or her friends to suggest that her revelation of being bi-racial would be taken negatively.

For such a complex character, I felt the motivations for her actions were only tied to her childhood and not her present experience with the man she loved. When Nora attends the tea party hosted at Lady Beaumont’s and Dawn invites herself as “Nwad”, all the older white women are interested in getting to know her. Although predictable, this could have been a moment to encourage Nora not to hide the truth. There wasn’t enough in the novel to indicate that Nora would have been ostracized from the Fisher family had she told them the truth.

When her fiancé Fisher chooses to marry her even though he knew she had stolen some toxic chemicals from his lab, it showed that his love outweighed everything, even his family name. Without giving away a major spoiler, the injustice that Nora was able to get on with her life was incredulous to me. I felt frustrated with the ending as Nora became such a complex character only to be quite flat in the end.

Have you Met Nora? will be available October 31, 2017 by Kensington Publishing Corp.

Disclaimer: The writer of this article received an advanced reader copy from the author/publisher in exchange for an honest review.

Catrina is from London and works abroad as a high school teacher, teaching High school film in the Philippines. She’s a serial traveler and has lived in Hong Kong, Spain and El Salvador (yes, murder central!). She binge watches TV shows, takes photographs, and occasionally blogs about her traveling adventures.