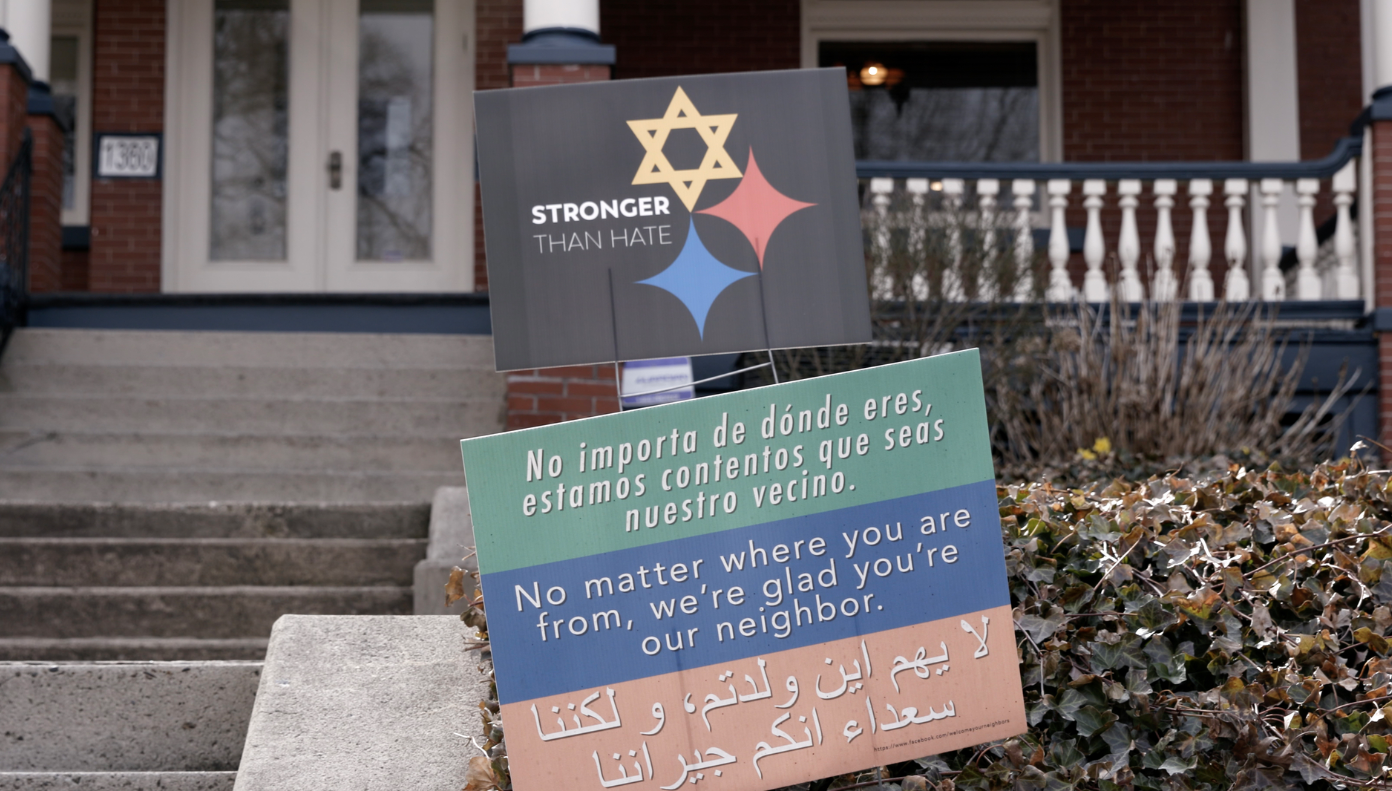 This review covers a documentary about an incident several years ago in which a white gunman entered a place of worship and opened fire. During this incident, the shooter was motivated by fantastical notions of white replacement and a “defense” of whiteness. In addition, the incident was one in which people from marginalized communities, many of them elderly, had to debate the merits of running, hiding, or attempting to confront the sounds of semi-automatic gunfire.

Sadly, these criteria don’t necessarily narrow the options much. For example, this documentary is not about the March 15, 2019 mosque shootings in New Zealand in which 51 people were killed. Nor is it about the June 17, 2015 Charleston church massacre that left nine Black parishioners dead. Rather, this documentary, directed by Trish Adlesic and executive produced by an eclectic group including Billy Porter and Mark Cuban, covers the 2018 Pittsburgh synagogue shooting. In this incident, eleven human beings were shot to death amid their morning worship.

HBO’s documentary, A Tree of Life: The Pittsburgh Synagogue Shooting, is not easy to view. There will likely be times during its relatively short run that you may have to pause it. I know I did. It is a documentary that, at its most focused, centers on three almost equally important subjects: the victims, the survivors, and the antisemitism that led to this violent, tragic occurrence.

Recorded mainly as talking head testimonials, interviews with the victims’ families, and those that survived the incident form the most integral part of the film. Here we learn about the humanity behind the names of the dead. We learn about David and Cecil Rosenthal, two brothers with learning disabilities known around town for their affability and kindness.

We learn about Jerry Rabinowitz, a doctor who, along with survivor Dan Leger, ran towards gunfire in an attempt to provide medical aid to anyone shot. We learn about Joyce Fienberg, whose nine-year-old grandson wondered if, at her funeral, there was a chance he and his parents might also be shot.

Overall, A Tree of Life has a pretty loose structure. Sometimes we watch a beat-for-beat account of what happened in the synagogue. Other times, we briefly learn about a couple of the survivors’ lives leading up to the shooting. Occasionally, the documentary will digress into topics that seem almost perfunctory for a film of this nature: gun control, what the victims think about it, and what the national milieu is like.

Since the filmmakers never make an explicit case on the matter (besides, well, the seemingly obvious), the attempt feels more shallow than it should. The same goes for the specter of Donald Trump’s presidency. While it’s probable that the filmmakers don’t hold the former president in the best of lights, the film itself lets the survivors have the final say.

Did they find it odd that a president who, despite denouncing white supremacy in speech, still cozied up to white nationalism in action came to visit the site of a Jewish massacre? One felt it was within his right to come; another thought it should have read the room and kept a respectful distance. In all, the vibe concerning former president Trump is “let’s not make this about him.”

What is tough about that proposition, however, is what survivor Audrey Glickman says: Trump received support from white nationalists. Even if he is not the cause of antisemitism in America, he is, in part, supported by its main American proponents.

The gunman, whom survivor Carol Black does not refer to by name, and neither shall this article, occupies little space in the documentary. It does highlight his antisemitic remarks and anti-immigrant views. What’s strange is the gunman didn’t even have a criminal record. What he did have was a vocal, online presence.

On fringe social networking sites like Gab, the gunman espoused talking points similar to what the former commander-in-chief might have said. These included the migrant caravan coming, they’re coming to take jobs and replace white people, etc. The gunman, though named in the doc for informational purposes, remains nameless in this review because, to paraphrase Glickman, he’s not even really a person. He’s a symptom of a larger malaise. He’s synecdochic of a body of ideas that begins with jokes and quips about supposed Jewish frugality but threatens to evolve into baseless claims about cabals and financial puppeteering.

Just ask Kanye West about that.

A Tree of Life succeeds largely because, while it is necessarily a tough viewing, it is extremely hopeful. It briefly looks at 20th-century American antisemitism. But it also shines a light on solidarity. The outpouring of grief over the massacre invited the interfaith Pittsburgh community to come together, with the Pittsburgh Islamic Center raising $250,000 to cover victims’ medical and funeral costs.

Elsewhere, years later, the Pittsburgh survivors now communicate with survivors of other tragedies like the Parkland high school shooting and the previously mentioned Charleston massacre. It’s a community no one is happy to be a part of, but they are happy for the support. It is this solidarity that Audrey Glickman calls for moving away from death and setting forth a “path of life.”

A Tree of Life premiered Wednesday, October 26, 2022, at 9pm PT/ET on HBO and is currently streaming on HBO Max.