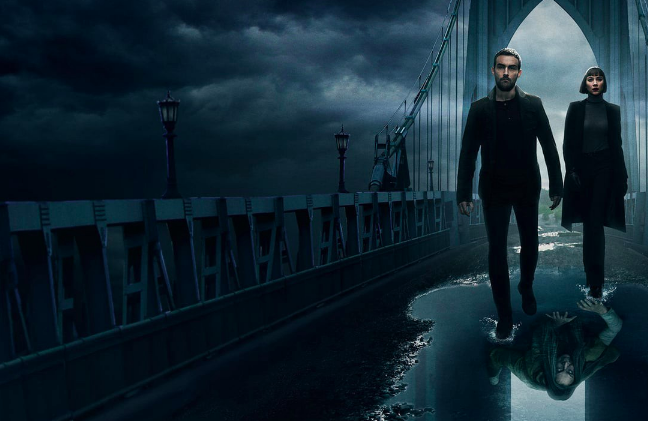 On a stormy night in Portland, Oregon, Dr. Louise Hastings (June Carryl) is typing outpatient notes when she feels a presence in her office. Something takes over her keyboard, typing “NO MERCY” repeatedly, then her bookcase glass shatters. Immediately Dr. Hastings goes to the secure ward session, where she and the other security guards find a dead guard. She has the others go into lockdown.

Over in Salem, Oregon, Sister Gabriella (Ariana Guerra) is waiting outside with Mr. Cavallo (Todd Thomson) for the priest Daimon Helstrom (Tom Austen), who is unimpressed with the fact that he is working with a newbie nun. Inside the house Mrs. Cavallo doesn’t care what is going on, she is drinking through it.

Daimon doesn’t carry a Bible but he has fully read the case notes on the affliction of Archer Cavallo (Jesse James Baldwin). Archer is waiting for the priest under the bed and is fluent in Latin. Daimon is unimpressed, but I am wary of all kids who speak Latin or recite Bible verses in Latin.

Once Archer reveals himself, Daimon sprinkles holy water on the kid, which easily fixes the problem. Except that, it wasn’t holy water, it was water from the bathroom. According to Daimon, the tropes don’t exactly work here. Archer doesn’t like that he is being called out for his lack of powers that he thinks are real and hates that Daimon has the gall to tell him what to do. Just when little man attempts to punch Daimon, a force prevents him from getting near, furniture is moved, and a circle of fire surrounds the two.

Then Daimon finishes the verse that Archer was reciting and walks off. The family needs therapy and no internet for the kid. The parents can’t believe that their child was faking it, and Sister Gabriella is fed up with Daimon’s attitude towards helping the afflicted. Daimon has far better things to do than drive in traffic for fake demon possessed kids.

San Francisco has an auction that I know for certain I could never afford. Ana Helstrom (Sydney Lemmon) arrives to be informed by Chris Yen (Alain Uy) that her target, Edward Tate (Eric Gustaffson), is in the bidding. The man has a lot of money. Tate and Victoria have a cute discussion about items, most specifically weapons of war. It would seem that Tate is into those type of things. She knows quite a bit about the man, down to the point of him killing seven women. Ana’s special power is stealing lives, too. He stops breathing, and she pushes him off the roof. Not a death I’m mad about.

This show will certainly make us travel. Colma, California, has a cemetery that is being robbed. Three men search deep within a crypt for some twisted looking coffin that is definitely not supposed to be opened. The leader of the group asks for help opening but the two men who are supposed to help are too scared. While he works on the coffin, one of the two men slams his head into it. Then the coffin’s legs open up and take the leader in, piercing and crushing him to death. How nice.

In Portland, Daimon’s lesson is thrown off when he is treated with a visit from Dr. Hastings. The two discuss what happened the night before and how the partnership between the priest and highly recommended Vatican nun Gabriella won’t work well together. This was not the reason for Dr. Hastings’ visit. Two patients escaped with help from a nurse. She’s sure it was the work of someone Daimon knows. He will be anonymously paying for the guard’s funeral.

Ana’s stunt had Chris on damage control so that no news outlets had info on her. The way he says the “old days” makes me question how long they have been at this game. The “Taker” has been trying to get ahold of her about the crypt in Colma. This alerts her enough to leave immediately with no word. Gabriella joins Daimon and Dr. Hastings in the security office of the ward. The nurse, Keith Spiecey, happens to be the leader who was killed by the crypt the night before. Lots of fun. Footage of the nurse shows that he had visited a patient’s room then disabled all feeds before breaking out the two patients. There are no cameras in the room. Gabriella wants to join Daimon to visit this particular patient but he refuses.

This patient is no other than Daimon’s mom, and he takes no time to question her on what she told the nurse and the symbol she has painted on the wall. When that doesn’t work, Daimon sits down next to her and utilizes a memory from his childhood to stir his mother up. Victoria Helstrom (Elizabeth Marvel) is not available though. The demon within her, Mother, spills on how Victoria never wanted him and drank when she was pregnant. Daimon demands to know where they were sent to, which the respond is: to visit an old friend. Then the demon sends him on his way. I’m not sure that I would be particularly be happy about having a half demon child.

Ana meets the Taker (Robert Wisdom) in Colma to the underground cave crypt. Remains of nurse Keith as well as the patients are littered about. The crypt is open and the skeleton within is an ancient demonic known as a Keeper. Keepers are demons that guard powerful things. The two think it maybe him, whoever that demon is. Ana has a moment when she loses herself in the skull of the demon. She brushes off the idea of calling her brother in for this.

Daimon gets questioned by Gabriella on his visit with Mother. Gabriella wants to go in to verify that what he says is real, which Daimon responds with a reminder of the child that she had brought to him the night before. Dr. Hastings informs Gabriella that the danger is real. Gabriella states that she doesn’t care for his sarcasm. After she departs, Dr. Hastings chastises Daimon for his behavior towards Gabriella, informs him that they need her help, and reminds him that she raised him better than that. Daimon brings up that he can’t help Mother alone; he needs his sister, but Ana last told him that she would never come back to Portland. I wonder what happened there.

Daimon sends his sister a text asking to talk. Ana sees the text and flashes back to a childhood memory of the two, blood on his chest as she cries in a corner. Daimon goes to the same flashback as he gets a tattoo. Two adults seemed to be fighting as the two siblings suffered. His scar doesn’t take the tattoo ink. Ana takes a moment to work on the skull. She cuts her finger then places her blood on the top. An eye pops up then disappears. She notices that the blood meets at a certain point.

The Taker has dug a grave for the remains. He notices the clothing have the name of the ward on it. Daimon makes a call to apologize to Gabriella as he checks on the Cavallo family from afar. Gabriella is packing things up in a car when Dr. Hastings comes along to remind her the scripture of forgiveness and question where she is off to. The nun has contacted the bishop at the archdiocese. The fact that Dr. Hastings is allowing a non-priest, Daimon, to conduct exorcisms, with abilities, is problematic for the Vatican. Without Gabriella’s confirmation, the institution could be in trouble.

Gabriella demands to see Mother or have firsthand experience, at which point, Dr. Hastings gives Gabriella her security card, stating that there is something on her desk for her to read. The something is none other than the file on Daimon and Ana, and their family. It would seem that Ana was kidnapped by their father and throughout their childhood, many murders were committed. In a journal kept by Victoria, their father was a serial killer. Dr. Hastings comes in to explain that Victoria was afflicted because she knew the truth explains why the two siblings never get along.

Ana places the skull away but finds a box that affects her to the point of remembering the day she was kidnapped, taken away from her brother and mother. The contents of this small box are trinkets, but it is too much for her to handle. Gabriella questions why Daimon can’t use his powers on his mother. While Dr. Hastings tries to explain, she starts coughing up blood. I hope she doesn’t die.

When she excuses herself, Gabriella thinks that this is a good time to use the doctor’s security card to visit Victoria/Mother. The girl is freaking stubborn. She walks into room to find Mother standing behind her. Gabriella claims not to be afraid and tries to use her knowledge of exorcism on Mother, but the demon within is too powerful. Dr. Hastings and Daimon arrive before Gabriella is smashed to pieces. Mother and son have a spiritual fight. A memory pops up of when young Daimon brushing the floor with a toothbrush and Victoria comes along and cradles his head. Victoria briefly comes to the surface and tells him to run. It takes Gabriella and Dr. Hastings to pull him and run out the door. At least, she tried to help him.

In Dr. Hastings office, she pours Gabriella a drink as Daimon explains what demons are. Daimon has figured out the symbol on the wall. Gabriella states how she has never experienced such hatred and evil before; Daimon reminds her that she asked for this. Outside, Ana makes her appearance to Daimon, hoping that Victoria is dead.

A truck driver on a stop finds a bloody nurse in the front of his truck. It attacks him.

That is quite the opening episode of this show. I hope Gabriella has learned her lesson, and I want Dr. Hastings to not die but I guess one mother figure has to in order to affect the characters. I am interested in the siblings’ past and how this affects the future. I’ll be bingeing the show with my Bible and cross. This is going to be fun.