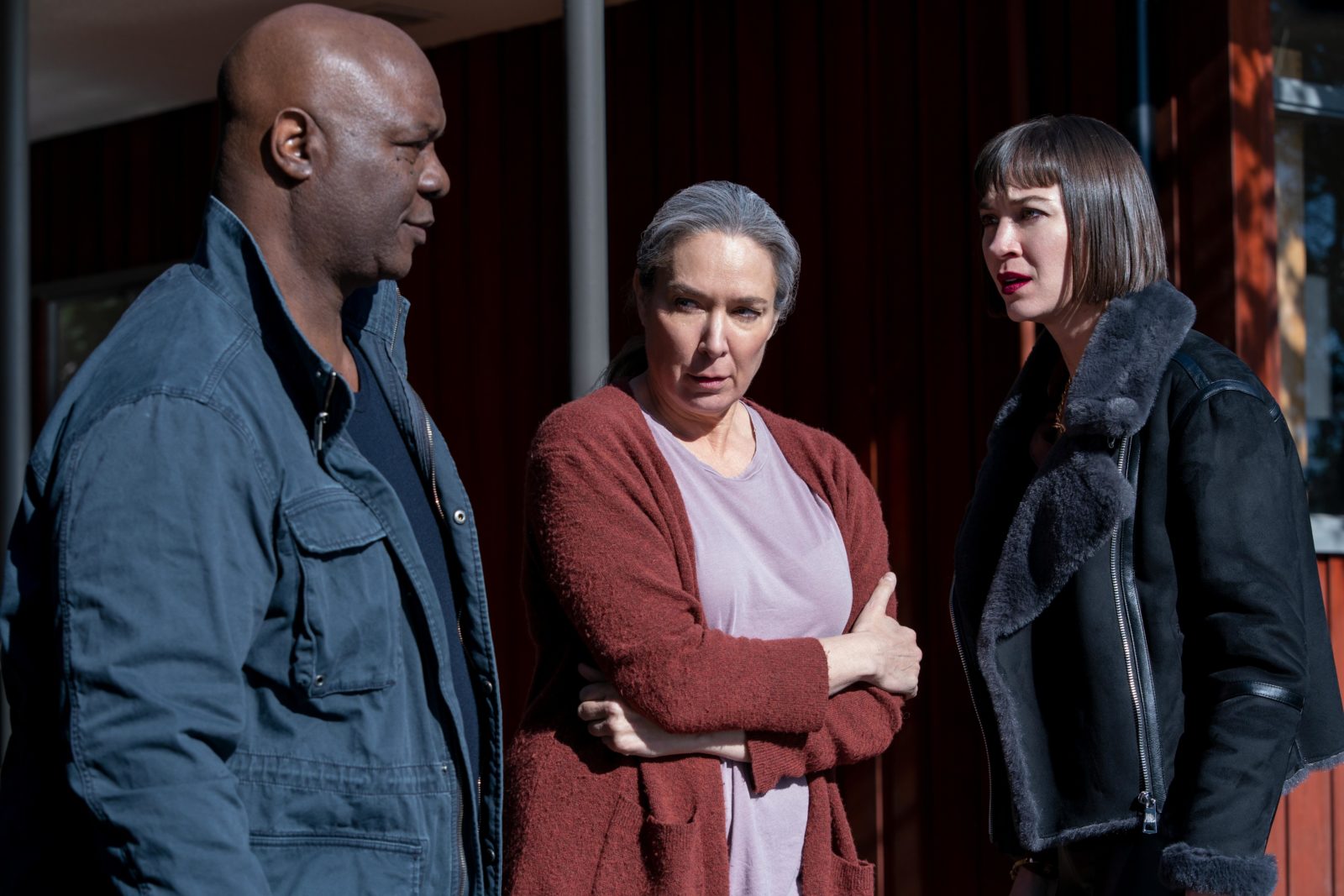 Twenty years ago, young Daimon considers jumping off a bridge to his death as he remembers the day his sister was taken away from him. Young Daimon jumps but stops just before he hits the water. He hears his father’s voice telling him that Daimon will always be his son. Then Daimon falls into the water. Did his father save him?

Daimon’s body is found by doctors and the paramedics; he is dead. Raum gets knocked out by the women, and Magoth finally wakes up and joins the others just as Gabriella leaves in Dr. Louise Hastings’s car. Caretaker arrives with his piece of the knife that he stabs Magoth with. Raum uses his power to impale Caretaker, but Dr. Hastings runs in front of it. Ana arrives to find the EMTs taking Dr. Hastings away. Victoria and Ana talk about Daimon and the knife. The mother and daughter duo make it back to the ward only to find out that Daimon is in the morgue. Victoria can’t believe it. Down in the morgue, a doctor is attacked. Gabriella is at a church saying her prayers when the Archbishop arrives. He doesn’t seem to take the pregnancy well.

Daimon arrives at a carnival ground to meet Raum and Magoth. His eyes look wonky. He’s not happy that Gabriella is not with them. Speaking of her, Gabriella finds herself surrounded by the Blood; apparently, she asked for their help. Esther blames Daimon for Gabriella’s condition. She’s convinced that Daimon is not trying to save Gabriella and is exactly like his dad. When will she ever get over this? Also, why did Gabriella call for them to come help her?

Ana and Victoria discuss what happened to Daimon, Dr. Hastings almost dying, and how Dad thought the two siblings were special. Ana explains that Dad told her this the day in the basement when he tried to set her on fire. He was going to show her how she is like him, but then Daimon and Victoria arrived. Victoria asks how Ana got away from Dad. She never did. He caught her, buried her alive so she could learn real suffering, but knew she would survive it. She did and realized that she really is special. Victoria hugs her daughter, but the moment is interrupted by Chris who claims that he has an eyeball in his throat.

Gabriella wants to think that Daimon could possibly exorcize the baby but Esther wants her to forget the man. Gabriella has to choose between having the baby, which would lead to the baby in a coma, or doing things the old fashioned way. Gabby can’t believe it.

Ana and Chris meet up Caretaker at the hospital to show him Chris’s new marks on his arm. Chris is a Keeper now. He doesn’t want the job but it is too late. Also he could help Daimon.

Daimon/Basar finds Ana praying. She thinks that Daimon is still alive. Magoth and Raum come in, but the Blood and Archbishop show up shortly after. Gabriella does not want a fight so she leaves with the three demons. In Dr. Hastings’s office, Caretaker informs Ana and Victoria that Gabrielle left with the demons but the Blood followed them to their location. Chris seems to have Keeper’s intuition on fixing the knife. It will need Ana’s fire and blood to mend. Victoria convinces her to do it.

The three demons and Gabriella arrive at the carnival site, which is freaky and abandoned. She is refusing to give birth and tries to appeal to Daimon, but Bursar informs her that she should let that idea go. Mother will wage a war against all mankind according to him. They bring her back to the room. Ana, with the help of Victoria, puts the pieces together but not without experiencing the pain of every person who has ever been killed or hurt by the knife.

After, Victoria checks on Caretaker at the hospital. He feels uneasy about Ana and Keeper Chris going after Gabriella and Daimon on their own, but he stays at the hospital. He opens up about how he didn’t want to know all the details about the supernatural until he had to. It was when he came home after taking a trip to see the world. He found out his little brother was possessed; marked by the same demon that marked Victoria. Little brother did not make it. Their talk is cut short by the surgeon. Dr. Hastings was revived twice during surgery and is unstable.

Looks like Gabriella is ready to give birth but not with a few words to Daimon/Barsar. He wants her to understand that no one will save her. Ana and Chris arrive at the spot then split up to look for Daimon and Gabriella. Daimon/Barsar senses their presence then leaves to handle it while Gabriella is crying out in pain. The whole abandoned carnival looks even worse at night. Daimon/Barsar lures Ana into a creepy hunted house that is full of jump scares. Probably not a good idea. Gabriella gets breathing coaching through Magoth while Dr. Hastings struggles with staying stable. That girl is doing all she can not to have a baby but that’s not working.

Ana finally gets to fight Daimon/Barsar. She ends up getting stabbed but is able to get Daimon back for a second. He begs for her to kill him. Chris shows up with his new Keeper powers that holds Daimon at bay. It is at this moment that the knife extends to a long fiery flame in Ana’s hand. She stabs Daimon in the back and pulls out the part that is Barsar, which turns into ashes. Daimon seems to be dying just as Mother makes it into the world. That was all very stressful. I think I need a nap.

The baby looks healthy but Gabrielle seems to be done. She is about to be executed when Daimon arrives, shooting the blade at each demon, killing them, before getting to Gabrielle, who seems to be in a trance, saying the Lord’s Prayer. Chris takes the baby.

Dr. Hastings seems to have pulled through. She wakes up to Caretaker beside her bed. The surgery included taking out a piece of her bad lung. So, she is staying.

Back at the ward, Keeper Chris is watching over the baby to insure there is no evil in her. He will be doing the job with Ana’s father’s knife. Looks like he is okay with his new job.

Daimon and Gabriella are at the hospital. He thinks that the baby could turn out fine if the two of them give her a nurturing home. However, Gabriella disagrees. She thinks that baby needs to be killed and that she is being punished for giving in to fear, questioning her faith, and giving in to temptation. This is her cross to bear. Alone. She can’t trust Daimon or his kind. That is hurtful. Gabrielle seems to be convinced that when she tried to reach him, he was something different (duh). The world they know is not normal; it is evil, and she thinks he is, too. Gabrielle regrets ending up at the ward.

Chris and Ana perform a ritual where she has to stick the knife into his skull. Thankfully we don’t have to see that.

Daimon is back at the bridge where he attempted to jump twenty years ago. He is joined by Ana, who is checking up on him. Daimon thanks her for saving him and tells her that he loves her. She actually says it back.

Later, Victoria and Ana make dinner at Daimon’s place. Caretaker and Dr. Hastings arrive to join in, too. Caretaker and Ana bond over the baby while Daimon and Dr. Hastings talk. The good doctor can’t reach Gabriella, but Daimon changes the subject to her not telling him about the cancer. Victoria and Ana bring out the food. Chris has gone back to San Francisco to win back his boyfriend. Victoria makes a toast that touches each person at the table for what they have experienced. The Blood gets a new recruit in Gabriella. Esther and Finn look happy about that.

A month later, Chris is at a dock holding a little girl’s hand when all of a sudden he feels a new being. An older looking man walks up to Chris with a smile, satisfied that he is the new Keeper. Chris instructs the little girl, Kthara, to run. The man is surprised by the name and instructs the little girl to think hard and remember her real name. Kthara remembers that she is Lily and that the older looking man’s name is Papa (Mitch Pileggi). Papa is delighted to know she remembers that and is ready to take Lily. Chris refuses to let her go. Papa responds by taking out several people behind him. Chris gives Lily’s hand to Papa. As Papa and Lily walk away, people are being taken out and Papa wants to find Lily’s brother and sister to catch up.

Dad must be Papa which makes Lily/Kthara siblings to Daimon and Ana, but she was reproduced through Daimon’s seed. Also, where was this old man for the past twenty years? I’m confused by this family tree. Demons make it complicated.

This show had a few slow episodes but the buildup to those last couple of episodes really made it worth the binge. I’m delighted by the fact that no major character died. Usually these shows are taking out everyone you get attached to. The real death is Gabriella’s optimistic faith and ignorance. Her traumatic experience certainly did a number on her. Yet, how could she forgive Finn over Daimon? They were both possessed. She relied too much on Daimon and his abilities. Ana really showed some true character growth. I’m glad that she was able to let her family in. Seeing Dad will really hurt her next season. I genuinely enjoyed this show. I can’t wait to see what happens next. Also, whatever happened to Bryce?