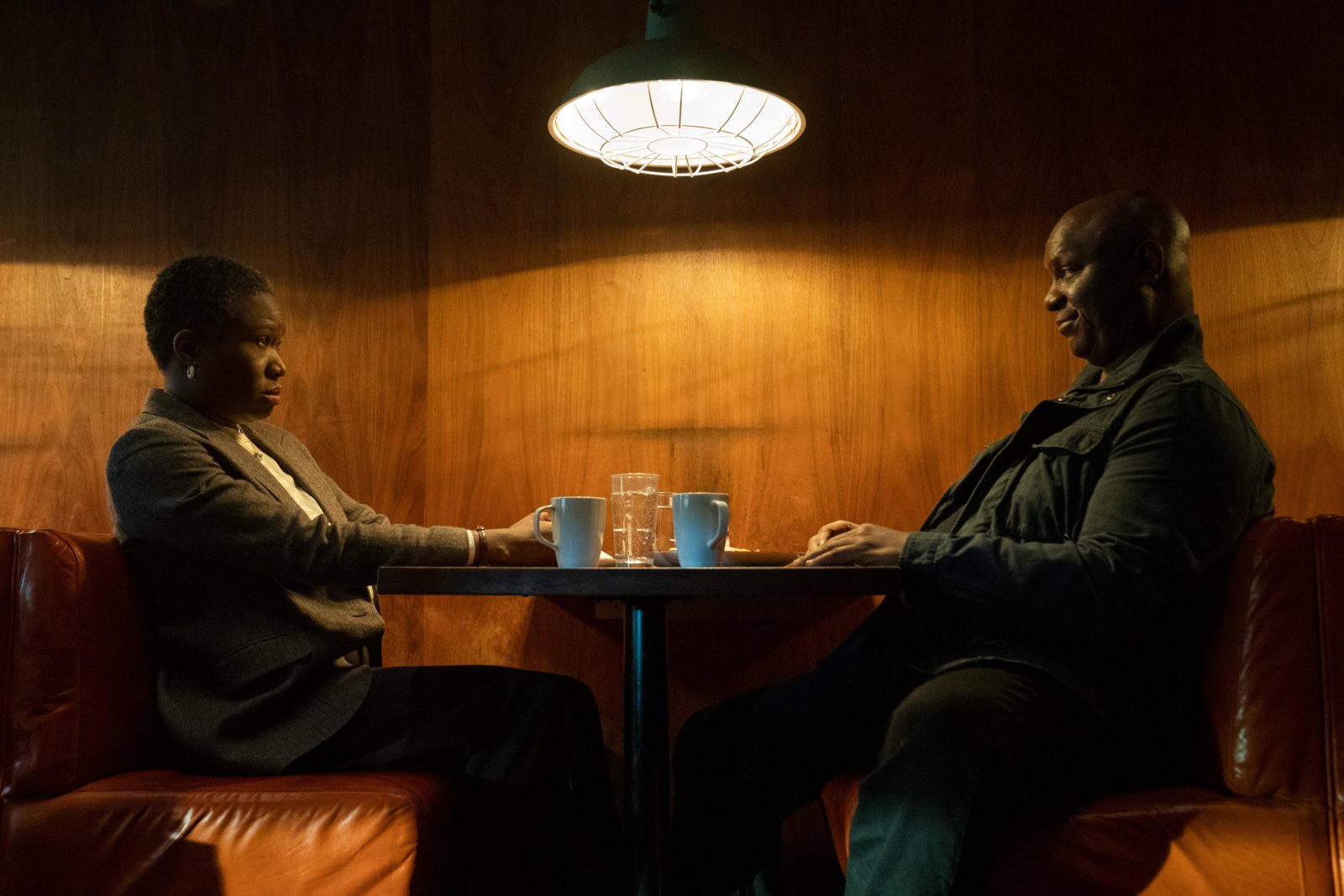 Gabriella and Daimon wake up in a room without a way out. The two try to figure out what they last remember after food is shoved in through the fireplace. Gabriella starts to remember seeing the mark on her scalp. She thinks that they are poisoned but the priest/Raum lets them know that they are safe and will be used for greatness. Also, Gabriella is not poisoned but experiencing morning sickness. How long has it been exactly?!

Ana is by her mom’s side wondering where Daimon is. She tries to call but it goes to voicemail. She leaves Victoria’s side. At a diner, Caretaker finds Dr. Hastings, who is quite relieved to see him alive. He explains how the Blood betrayed them all and how he has escaped. He is happy that the siblings are safe and wants to take a trip with Dr. Hastings to a beautiful spot for them. She can’t go until after chemo and surgery. He is genuinely happy to hear she is willing to live longer. Aww, they are cute. Ana arrives at Daimon’s place and finds the door open and blood on his bed and in the bathroom. Just as she is about to leave, the scar from the knife feels the piece that was left in the backpack.

Daimon arrives at the ward but he is not himself. But this is actually Barsar that is lurking in Dr. Hasting’s office. Daimon is also talking to Gabriella about how this isn’t their fault that they are locked up. Ana thinks that they were weak and that’s how they ended up in this position, with Gabriella pregnant with something evil. Daimon thinks that their baby isn’t evil and professes his love for her. Gabriella and I both know that this isn’t Daimon. As she tries to get away, Mother makes her appearance and calls in Magoth and Raum to subdue Gabriella.

At the ward, Daimon/Barsar visits Victoria. She is just waking up when he closes the door. How does she not notice that this is not her son? Just when she thinks the worse is over, Daimon/Barsar chokes her. Luck would have it that Ana comes in to stop him. That little touch makes her realize that this is not her brother within. The two siblings end up in the hallway and fight it out. Ana does her best to use her powers to take him out. Dr. Hastings and Caretaker find Daimon/Barsar knocked out with Ana trying to get up.

Chris is enjoying being with Derrick when all off a sudden a strange feeling comes over him. He takes a moment to check on his bite marks and notices new marks appearing on his arm. Poor man can’t catch a break. Caretaker, Ana, and Dr. Hastings have Daimon/Barsar tied up in Mother’s old room. Barsar is fighting to stay in control. When he comes to, they question where Gabriella is. He claims that she is dead, but Ana knows better.

Gabriella endures being drugged and fed by Magoth and Raum. She wakes ridiculously far along her pregnancy and tied up to a bed. Mother is by her bedside, trying to convince Gabriella that giving birth is an amazing power. It would seem that Gabriella will be giving birth to Mother. Mother tells the story of the first time men came to kill her son with spears. She told the village’s elders, but they did nothing. Basar, however, woke and killed the whole village. Mother instructs Gabriella to rest.

Caretaker, Dr. Hastings, and Ana talk about how this new possession is possible. Caretaker decides to go look for Gabriella while the other two try to fix Daimon. His suggestion is to use the knife but Ana wants to figure out another way. She doesn’t want to risk killing him. Ana talks to Victoria about going to see Daimon, but Vicky is scared. Fear can’t be a factor right now; Daimon needs her. Gabriella is infuriating Mother by trying to get out of the chains. She realizes that Mother is no longer possessing her because she is busy growing within. I wonder what she will do.

Victoria visits Daimon/Barsar who is ready to taunt her with the death of her child. She tells him that Daimon will be able to get out because he is stronger than Barsar. This  didn’t faze Barsar but Victoria states that Mother doesn’t love Barsar at all, he is just a tool to her, unlike Daimon, who has people who actually love and care for him. Barsar gets really upset and affects the patients as well as cracks the small window. Dr. Hastings stop the situation and takes Victoria away to rest.

Raum comes in to give Gabriella a shot. He takes this as a moment to talk to Mother about getting a body of his own. He notices blood coming from coming from under Gabriella. She wakes up to plead to the priest within, which momentarily distracts him enough for her to get loose, stab him, and run. She makes it out to an open road where she finds help. Chris is desperately fighting whatever is within him but soon he is gagging up an eye! Is that the Keeper I see?

At Daimon’s place, Victoria thanks Dr. Hastings for raising her son and taking care of them. Gabriella bangs at Daimon’s door then freaks out when she finds out that she wasn’t held captive for months — it has only been a day. The two women lay Gabriella down to rest. The supernatural have strong powers. Caretaker and Ana talk about cutting Barsar out of Daimon with the very knife that affects the two siblings. He wants to be able to do it, but she thinks it should be her. Caretaker gives her a loving speech about not being there for her enough. Victoria calls Ana to warn her about Gabriella’s condition. Ana figures out that Mother/Kthara is not interested in possession anymore; she wants her own body! She instructs Victoria to lock up Gabriella up and wait for Caretaker. Ana pulls out the knife then instructs Caretaker on what to do. She takes the knife to do what she gotta do.

Victoria is at a dangerous level of stress as she talks to Dr. Hastings about what they should do about Gabriella. I think Victoria wants to kill the Mother within. Gabriella wakes up to find that Magoth and Raum have arrived outside. She warns Victoria and Dr. Hastings.

Ana visits Daimon/Barsar whom seems unbothered that she has arrived with a knife. His powers are quite strong. He taunts her with Daimon’s memories as he also uses his power to force her to kill herself. Ana however, counters with her own offer: her team has Gabriella and his mother. If he kills Ana, the baby is dead. Daimon/Barsar is just about to attack Ana when he falls to the ground. Daimon could be fighting for his body. Ana is just about to make an incision in his back when Daimon wakes up asking for Gabriella.

The women are barricading the home and preparing for war. Ana tells Daimon what is happening and tells him that they need him to take out Mother. Daimon doesn’t think he can do it but Ana urges him to try. So, Daimon tells her to cut Barsar out of him now, but the procedure isn’t going well because they need both pieces of the knife. Problem with that. Caretaker stupidly has taken the other piece. I guess this is pure madness. Ana instructs Daimon to hold Barsar for as long as possible as she goes to get the other piece. He is struggling.

Caretaker receives a call from Chris who is going through it! We don’t have time for that because Magoth and Raum have begun their attack. The ladies get Magoth with boiling water and a baseball bat, but Raum went in straight for Gabriella, who is about to take butcher knife to the stomach. Daimon is fighting for his soul and body. Poor man gets thrown all over the walls and seems to get knocked out because the light literally goes out.

I really hate cliffhangers. I bet Chris comes in a big way and a parent figure dies.