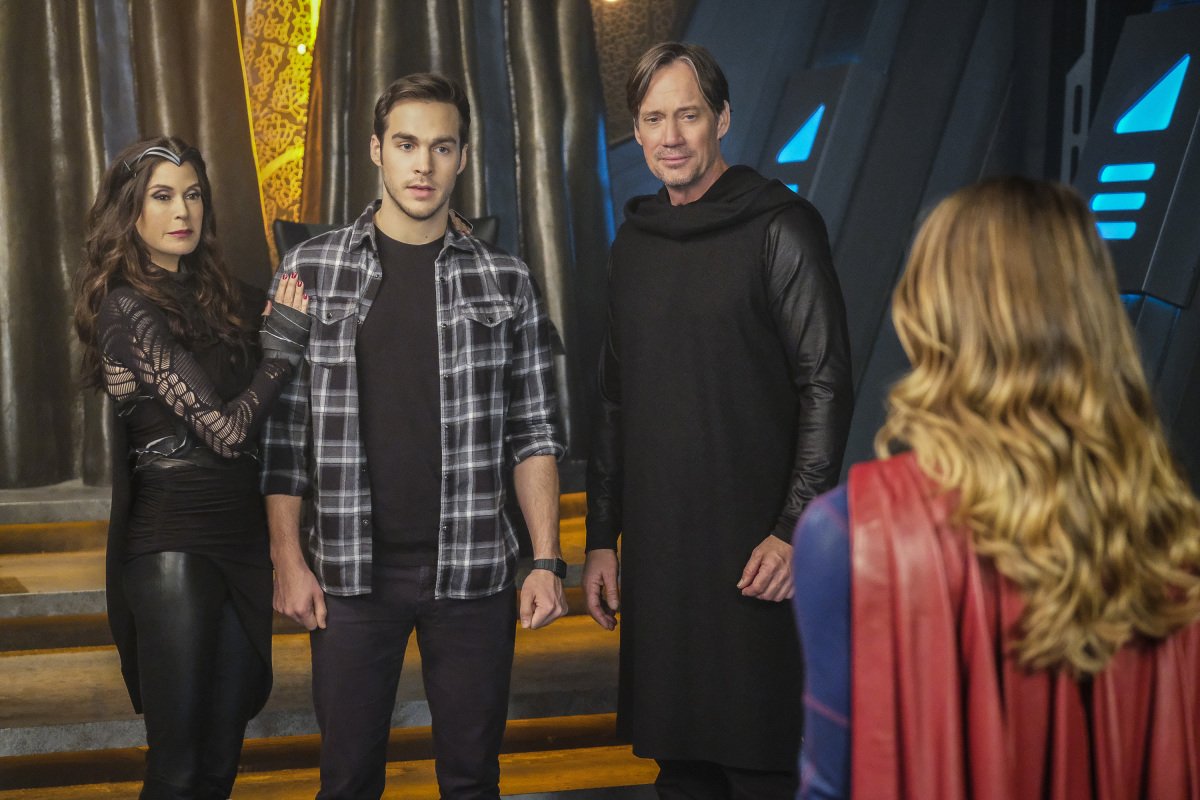 This week’s episode of Supergirl explores who you were vs. who you’ve been by giving insight into pre-Earth Mon-El and the reality of Winn’s relationship.

The Danvers sisters are hanging out with their respective baes in their respective apartments, when there is a broadcast over the television from Mon-El’s parents demanding he be freed. The DEO locates Mon-El’s liberators and he claims (lies) he’s never seen the ship that his parents are on. Supergirl goes to meet them and gets bubbled before she retreats.

Mon-El asks the DEO to stand down as he intends to relinquish himself (so brave, so noble, such a liar). As he is getting beamed up, Kara hugs him getting snatched up in the process (I’m not going to lie, it was low-key cute). Everyone on the ship bows to Mon-El and we meet Lois Lane (Terri Hatcher from the 90s’ New Adventures of Lois and Clark) and Hercules (Kevin Sorbo, from, you know) — I mean Mon-El’s parents and find out that Mon-El is the prince of Daxxom (insert sarcastic gasp of surprise here).

His parents are so delighted to see that their son is alive that they invite Kara (you know a Kryptonian, their natural enemy) to dinner. At dinner, we discover that Mon-El’s parents are essentially President Orangutan Bum, and that Mon-El lied about all of his past, including, how he escaped Daxxom. Kara is disgusted because her boyfriend is high-key garbage and leaves the dinner early.

Kara tries to help Winn with his Lyra problem to avoid her relationship issues but her friends and her sister know better, suggesting that she sit this one out. Alex tries to get Kara to forgive Mon-El signifying that there might be more to his story than she knows.

Mama Daxxom stops by the DEO unannounced (which is kind of rude?) and asks Kara to let/tell Mon-El to go back to Daxxom with them so that their planet can start over. Kara, who clearly isn’t in the forgiving mood, tells Mon-El to take responsibility to make Daxxom better and reunite with his family.

Later, Kara and Winn talk about why he forgave Lyra and whether she should forgive Mon-El. BUT her case was totally different than Kara forgiving Mon-El. He was in a place of privilege and left people to die — she was trying to survive.

Mon-El returns to his parents’ ship but refuses to go back to Daxxom with them, telling them to go home and never come back. As he has grown up and moved past their antiquated ideas.

While the DEO is dealing with the Mon-El issue, Winn is playing hooky with Lyra. She talks him into breaking into the National City Art Museum so that they can have sex amongst the art (how Renaissance – esque).

Maggie calls Winn into the National City Police Station because someone stole Starry Night from the museum he just broke into (which happens to be at the MoMA in New York in real life). Since Starhavenites… (?) don’t show up on camera, it looks like Winn was in the museum by himself on the security cameras, making him the number one suspect.

Maggie thinks Lyra set Winn up, but he refuses to accept this and gets 24 hours to clear Lyra’s name. It turns out Lyra has a record of setting up her “boyfriends” and stealing valuable art. Winn finds and confronts Lyra and she admits to playing him. She tries to get away, but Winn brought back up (Guardian and Alex) and she gets caught.

In DEO custody, Lyra tells Winn the reason she tricked him was because her brother is being held hostage by art stealing gangsters. Despite her tragic backstory J’onn won’t help her brother because he’s intertwined with a bigger DEO case. Winn foolishly decided to take matters into his own hands and frees Lyra from the DEO.

Lyra and Winn show up to the drop off point for the art she stole. They gave the art dealers fake art, and the art thief boss threatens to kill them when Guardian comes in as backup. James loses the fight and is about to die but the DEO, lead by Alex, busts in and catches them. It turns out that this was Winn’s plan all along (because he’s a smart cookie) and Lyra reunites with her brother.

Lyra plans to leave (because their relationship was a sham) but Winn tells her he still has feelings for her and they kiss before she walks away.

Later, Winn talks to Kara about the crossover device she got from Cisco. Winn thinks he and Cisco would be good friends (AND THEY WOULD OMGAHgjhajhafs) and Kara thinks about taking an interdimensional vacation after her breakup.

The DEO has a morning meeting (for the first time ever lol) to announce that their new prisoner (Music Meister) will be coming through to be detained (what a great transition). Music Meister announces that he’s been looking for Kara, and hypnotizes her. He then grabs the interdimensional thing to search for Barry and Kara faints, still under his spell.

I really enjoyed the overall themes of growth and seeing things as they really are in this episode, Mon-El as a character has grown and changed drastically since the start of the season, and this episode really demonstrated that. Him lying was a sort of catalyst of the lies he told when he got there. Unless Mon-El’s parents are going to be transitioning into villains’ this was essentially a filler episode.

I just want it to be noted that though I HATE Karamel with the passion of… our sun, I like Mon-El as a backdrop of basicness. Kara and Mon-El’s relationship is problematic, but not just because Mon-El spent most of it lying to her. It’s the situation that caused the lie which is the problem. Mon-El lied to Kara because she judges him harshly, mostly because she’s expecting him to backslide into the guy she first met, and because she expects him to hold true to the stereotypes she holds close concerning his people. Kara wants Mon-El to be something he’s not.

Mon-El is trying to desperately to be who Kara wants him to be, because he loves her, and that’s sweet in theory, but he is changing because of her, not for himself. I agree with Alex and Winn, Kara needs to see Mon-El’s point of view. While I love the thought of them breaking up, I don’t think she should’ve broken up with him on this episode.

Lastly, I’m not sure how I feel about Lyra being this secret art thief, while it does make her a more interesting and dynamic character, I would love it if the Supergirl/Arrowverse writers would realize that you don’t have to destroy a relationship to make it better. On again, off again relationships are exhausting and annoying.