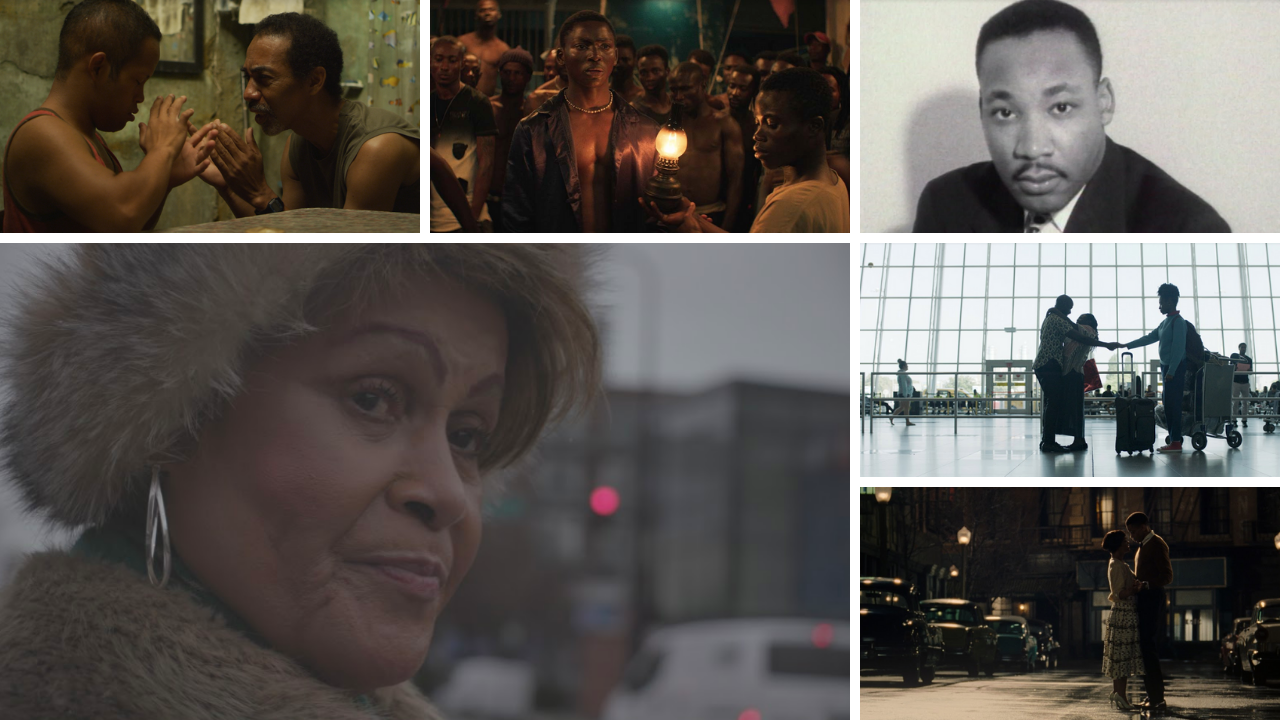 Artistic Director Mimi Plauché has announced the 15 films – nine features and six shorts – showing in the 56th Chicago International Film Festival’s Black Perspectives program. Now in its 24th year, Black Perspectives highlights the excellence and diversity of African American cinema and films by the African diaspora from around the world. By virtue of the festival’s 2020 streaming capabilities, most Black Perspectives films are available for streaming across the U.S., October 14-25, 2020.

The 2020 line-up – available for home viewing via the Festival’s website and Roku and Apple TV apps – includes the lush, joyous period romance Sylvie’s Love, starring Tessa Thompson (aka Valkyrie in the Marvel movies universe) and Nnamdi Asomugha (Crown Heights) in a film that  looks and feels as if it were made in the Golden Age of Hollywood. Featuring rarely seen archival images of Chicago’s Bronzeville neighborhood nightlife and drag balls, Mama Gloria – making its World Premiere at the Festival – documents the life of 73-year-old transgender Chicago woman Gloria Allen and her life growing up in the “sissy balls” of Chicago’s southside in the ’50s and ’60s. In 40 Years a Prisoner, filmmaker Tommy Oliver – executive producer of OWN series Black Love – documents activist Mike Africa Jr.’s fight to exonerate his parents, who were members of the revolutionary group MOVE imprisoned after a violent police raid on their Philadelphia commune in 1978. Actress Regina King makes her feature film directorial debut with One Night in Miami, an imagined meeting of icons Cassius Clay, Malcolm X, Sam Cooke, and Jim Brown in 1964, which is also available to view live at Chicago’s ChiTown Movies drive-in, 2343 South Throop Street in Pilsen, on Friday, October 23.

In addition, the horror satire Bad Hair will show live exclusively at the ChiTown Movies drive-in on Friday, October 16. A livestream Q&A with Oscar-nominated filmmaker Sam Pollard (4 Little Girls) will take place on Monday, October 19, in conjunction with the Midwest premiere of his new documentary MLK/FBI.

“I am very proud of what we’ve brought together for the 56th Festival,” said filmmaker and Black Perspectives programmer Joyy Norris. “This season’s nine-feature slate of films – among the largest Black Perspectives program in Festival history – together with the shorts program Evidence of Things Unseen, has a meditative mood, which felt especially needed this year; the breadth of films programmed speaks to the proliferation of stories centered in Black experiences that are shifting cultures to re-examine their blind spots in relation to Blackness without filmmakers having to define it with annoying explanatory commas.”

This powerful documentary bears witness to the lifelong efforts of Michael Africa, Jr. to secure the freedom of his parents, who were incarcerated for four decades. Along with seven other members of MOVE, a Black Liberation group active in Philadelphia in the 1970s, Debbie and Michael Africa, Sr. were charged in the death of a police officer during a brutal raid by authorities at the end of that decade. Interviews with journalists, activists, and others, along with archival footage of the MOVE commune, are intercut with Michael Africa, Jr.’s ongoing battles with the courts. With uncanny resonance to our current moment, the film delivers a bracing examination of the embattled state of liberty in the face of a racially and politically biased justice system.

Meet Mama Gloria. Chicago’s Black transgender icon Gloria Allen, now in her 70s, blazed a trail for trans people like few others before her. Emerging from Chicago’s South Side drag ball culture in the 1960s, Gloria overcame traumatic violence to become a proud leader in her community. Most famously, she pioneered a charm school for young transgender people that served as inspiration for Chicago playwright Philip Dawkins’ hit play Charm. Luchina Fisher’s empathic and engaging documentary is not only a portrait of a groundbreaking legend, but also a celebration of unconditional love, the love Gloria received from her own mother and that she now gives to her chosen children. World Premiere!

On one incredible night in 1964, four icons of sports, music, and activism gather to celebrate one of the biggest upsets in boxing history. When underdog Cassius Clay, soon to be called Muhammad Ali (Eli Goree), defeats heavyweight champion Sonny Liston at the Miami Convention Hall, Clay memorialized the event with three of his friends: Malcolm X (Kingsley Ben-Adir), Sam Cooke (Leslie Odom Jr.), and Jim Brown (Aldis Hodge). Based on the award-winning play of the same name, One Night in Miami is a fictional account inspired by the historic night these four formidable figures spent together. It looks at the struggles these men faced and the vital role they each played in the Civil Rights Movement and cultural upheaval of the 1960s. More than 40 years later, their conversations on racial injustice, religion, and personal responsibility still resonate. Also shows live Fri, Oct. 23, 6:30PM at ChiTown Movies

In this thoughtful and uplifting debut, the profoundly charming Chuo is having to navigate the challenges of early adulthood with Down Syndrome. He feels a growing need for independence from his father José, who struggles to provide and care for his son as he grapples with demons past and the disappointments of dreams deferred. When Chuo lands a job at a small graphic design studio, he begins to find community and discover purpose and a sense of self. Long parted by an ocean of silence and shame, will father and son be able to fulfill the promise of Chuo’s dreams and build a common future?

In Sylvie’s Love, the jazz is smooth and the air sultry in the hot New York summer of 1957. When Sylvie (Tessa Thompson), the daughter of a record-shop owner (Lance Reddick), meets Robert (Nnamdi Asomugha), a saxophonist who gets a part-time job at the shop, the two begin a friendship that sparks a deep passion in each of them unlike anything they’ve felt before. Years after their summer romance comes to an end, Sylvie has success as a TV producer, while Robert tries to come to terms with what the age of Motown is doing to jazz, the music that defines his work. While life continues to take Sylvie and Robert in different directions, they cross paths again, only to find their feelings for each other remain the same. Writer-director Eugene Ashe combines romance and music into a sweeping story that brings together changing times, a changing culture, and the true price of love.

This program showcases the talents of Black filmmakers from across the diaspora, painting a sweeping image of Black life in the United States and abroad. A collection of varied genres and styles, these films are reflective, observant, and sometimes hilarious. Featuring works by Terrance Daye, Nico Opper and Shannon St. Aubin, Kantarama Gahigiri, Amina Sutton, Maya Tanaka, Tebogo Malebogo, and Pat Heywood and Jamil McGinnis.

After 17 years in New York, working to support his family back in Angola, Walter has grown ever more comfortable living as a single man in the U.S. When wife Esther and daughter Sylvia are finally able to join him in the city, the three must find a way to reconnect as the time apart has rendered them virtual strangers. Arranged in chapters told from the perspective of each character, this insightful, beautifully conceived film captures the immigrant experience with finely detailed nuance, as Sylvia’s embrace of urban youth culture and dance sets the stage for an inevitable clash of values. From their colliding worlds, can they fashion an entirely new sense of home.

It should come as no surprise that the FBI mounted a relentless campaign of surveillance and harassment of Dr. Martin Luther King, Jr., but this astonishing documentary reveals both the shocking details of the operation and the complexity of the iconic man in its crosshairs. Using newly declassified files, Oscar-nominated filmmaker Sam Pollard (Chicago International Film Festival’s “Best of the Fest” director of Two Trains Runnin’ and Sammy Davis Jr: I’ve Gotta Be Me) brilliantly weaves together revelatory restored archival footage, Hollywood movie clips, and interviews with key cultural figures to tell an astonishing and chilling story about power, racism, and the dark side of the U.S. government. A livestream Q&A with director Sam Pollard takes place Monday, October 19, 7pm.

A young man is sent to “La Maca,” a prison in the middle of the Ivorian forest ruled by its inmates. As tradition goes with the rising of the red moon, he is designated by the Boss to be the new “Roman” and must tell a story to the other prisoners. Learning what fate awaits him, he begins to narrate the mystical life of the legendary outlaw named “Zama King” and has no choice but to make his story last until dawn. Screens virtually on October 18 at 2pmCT and October 21 at 7pmCT in a four-hour window.

LIVE AT THE DRIVE-IN

In this hilarious horror satire set in 1989, an ambitious young woman gets a weave in order to succeed in the image-obsessed world of music television, but her flourishing career comes at a cost when she realizes that her new hairstyle might have a mind of its own. As he did with his auspicious debut Dear White People, Justin Simien combines sharp, witty storytelling with piercing insights about race, Black identity, and American society. With terrific performances from newcomer Elle Lorraine and an all-star cast including Lena Waithe, Kelly Rowland, Usher Raymond, and Vanessa Williams as her boss-from-hell, Bad Hair is topical, funny, and full of hair-raising thrills. Shows Fri, Oct. 16, 7:00PM at ChiTown Movies

Festival Passes – offering access to 10 or 20 virtual screenings – and single tickets are available now to the general public at chicagofilmfestival.com/festival/tickets. All screenings, including streaming movies, have a finite number of viewings allotted, so advance purchase is recommended to guarantee access.

Founded in 1997 in collaboration with Spike Lee to highlight the excellence and diversity of African American cinema and films by Black filmmakers from around the world, this program celebrates the richness and diversity of African American and Black storytellers from across the diaspora. Through films, Industry Days panels, and Tributes, the Black Perspectives Program showcases the work of emerging and established African American filmmakers. The Festival has world premiered the first film by acclaimed director Ava Duvernay as well as featured work by American luminaries such as Lee Daniels, Barry Jenkins, and Maya Angelou, among many others. The Program has also presented the most recent works of African masters (Djibril Diop Mambéty, Ousmane Sembene, Abderrahmane Sissako) and British filmmaker Steve McQueen. The Program features an annual tribute, with honors and awards given to emerging and established film artists such as Oscar winners Viola Davis, Ruth Carter, Forest Whitaker, and Sidney Poitier.

More information can be found at https://www.chicagofilmfestival.com/.