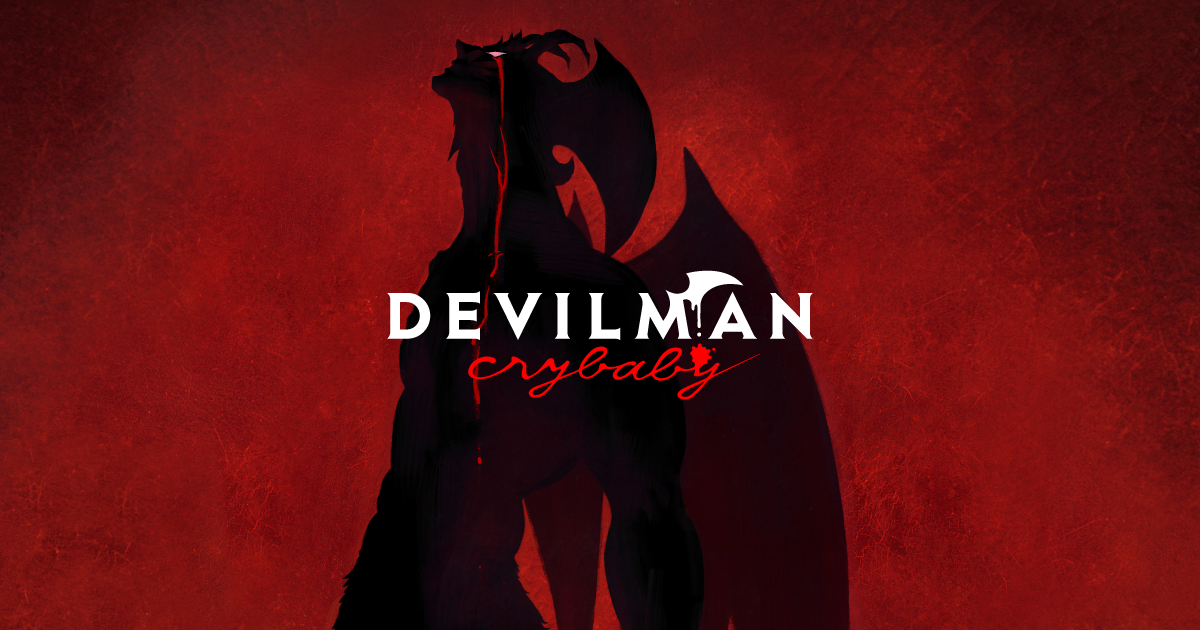 If you hadn’t watched Devilman Crybaby yet, please do. I promise it will be worth your while. Devilman Crybaby is an anime series now streaming on Netflix, adapted from the 1970s manga, Devilman created by Go Nagai. This May 2018, the manga will be released for the first time in North America.

The television adaptation directed by Masaaki Yuasa (Mind Game) is about how a sensitive teenage boy, Akira, with the habit of crying all the time, inherits demon powers making him half demon and half human, thus the name Devilman. Guided by his childhood best friend, Ryo, his mission is to kill man-eating demons to save humans.

In this world, demon encounters are rapidly increasing. Ryo visits a fellow scholar in the Amazon and learns the truth about demons’ existence after watching his colleague become possessed. He rushes back home to Japan to confide in his friend, Akira, and asks for his help in getting evidence that proves demons are real.

Ryo takes Akira to a Sabbath party where young people attend hoping for demons to show up. However, when the demons appear, they take over some of the participants’ bodies and slaughter the rest. In the midst of the chaos, Akira is possessed by one of the most powerful demons, Amon, and becomes Devilman. The tables turn, when Devilman begins murdering all of the demons instead.

If you’re looking for your typical commercial anime, like Naruto, or some magical girl flick, this isn’t it. The intro perfectly sums up the show, which mimics a Rorschach test with grotesque devil-shaped images, topped with what I describe as techno “worship” music. Furthermore, the first episode consists of a fly eating teacher, machine gun-toting teen, and a trippy rave party complete with nudity and drugs.

Devilman Crybaby’s over the top content and sometimes crude and frequently frenetic imagery reminded me of Kill la Kill and FLCL; which are both jarring at first but brilliant once you get accustomed to the style.

The soundtrack alone will draw you into the series, featuring 1980s Miami style electronic music, techno with vocals that sound like it came from The Exorcist score, and surprisingly there’s hip-hop too, where young teens rhyme while beatboxing.

If you allow Devilman Crybaby to take you on the journey it has laid out, you’ll see that everything comes together in a satisfying ending.

AN EPIC TWIST (SOME SPOILERS)

Devilman Crybaby will forever be rooted in my memory for having one of the most unexpected twists and shocking endings I’ve ever seen. At the beginning of the series, we’re led to believe that this is fundamentally a superhero show. The hero, Devilman, comes to be and vows to protect humanity by ridding the world of all demons. This plan starts off splendidly as Devilman defeats demon after demon, and continuously reminds us that his heart is human even if his body is a devil.

Then mid-way through the anime things change. In line with Ryo’s goal to reveal demons to the world, he devises a plan that exposes the true form of another devilman: an unfortunate high school track star who was unwillingly possessed by a demon. This act causes nations all over the world to panic. The world’s armies go on a massive killing spree; since they have little knowledge of the demon world, they begin killing any human they feel may potentially turn into a demon, without any justification. So now humans have become a bigger enemy to mankind than demons.

As the crisis escalates, Akira gradually loses more and more control of the situation. His objective becomes muddy; he’s supposed to save the humans but they’re now the adversary. Which raises the question, ‘What is Devilman’s purpose’?

And that’s what makes Devilman Crybaby so great. A mundane and overused hero narrative is rejuvenated by this unconventional turn and it’s exciting because you don’t know where the story is taking you.

Eventually, Akira is outed by his “friend,” Ryo. who broadcasts a video of Akira transforming into Devilman on television, which forces him to flee from authorities. He continues to fight a losing battle as humanity is at the brink of destruction — literally. Tanks roam the streets, people are gunned down, and bombs goes off. The human population drops significantly after a few days and Devilman doesn’t have much to save nor does he have the power to derail the violence.

Then we finally get to the point of the story. As expected this was not a story about a hero. This was a story about two friends, with two different outlooks on life, and their relationship with one another.

The friends being Akira — and, in one of the best character reveals ever — Ryo A.K.A. Satan. At the moment you learn Ryo’s true identity, it all makes sense:

Mind you, when Devilman first transformed at the Sabbath party, Ryo specifically calls out to “Amon” to possess Akira. How else would he know the name of the demon unless he was acquainted with them? Which is why I love this anime, so much care was taken into every detail that you can go back to the first scene and trace a link to the ending.

The story, amazingly enough, continues to intensify in the last few episodes. Satan reveals himself to Akira and the origins of how he came to Earth. If you’re familiar with the Holy Bible, it says that Satan led a rebellion against God in Heaven, which Satan lost and was cast down to Earth. Devilman Crybaby pulls its story from there.

Then, Akira with his pure heart defeats Satan and lives happily ever after with the last of the human race… is how most stories would end, but this is Devilman Crybaby. Instead, Akira loses to Satan after an epic fight. Satan has some remorse because he realizes he did have feelings for his “best friend” who’s now gone, but then it’s time for him to move on to the main battle with God, which has been his true objective all along.

The story ends right there. We don’t know if Satan wins his war with God or not. But what we are sure about is that Akira, formerly known as Devilman, is dead and ALL of humanity has been wiped out. Fin.

At first, I was shocked. As a human you feel so small, Satan kills all of the humans then he and God fight like humans never existed. Then I realized this is the story of Revelations and that’s kinda how it ends. It’s not accurate down to the letter, there’s no rapture, but the no living beings will be left on Earth part was pretty right on.

I applaud the creators for the bravery it took in depicting that ending with no turning back. There’s literally nowhere else to go with the plot, Akira is dead, so he can’t do anything, and no one can assume his mantle because they’re all dead too.

Despite feeling a little depressed, this is now one of my favorite endings because I didn’t see it coming and at the same time it perfectly fit the story, which was a fun rollercoaster ride of emotions.