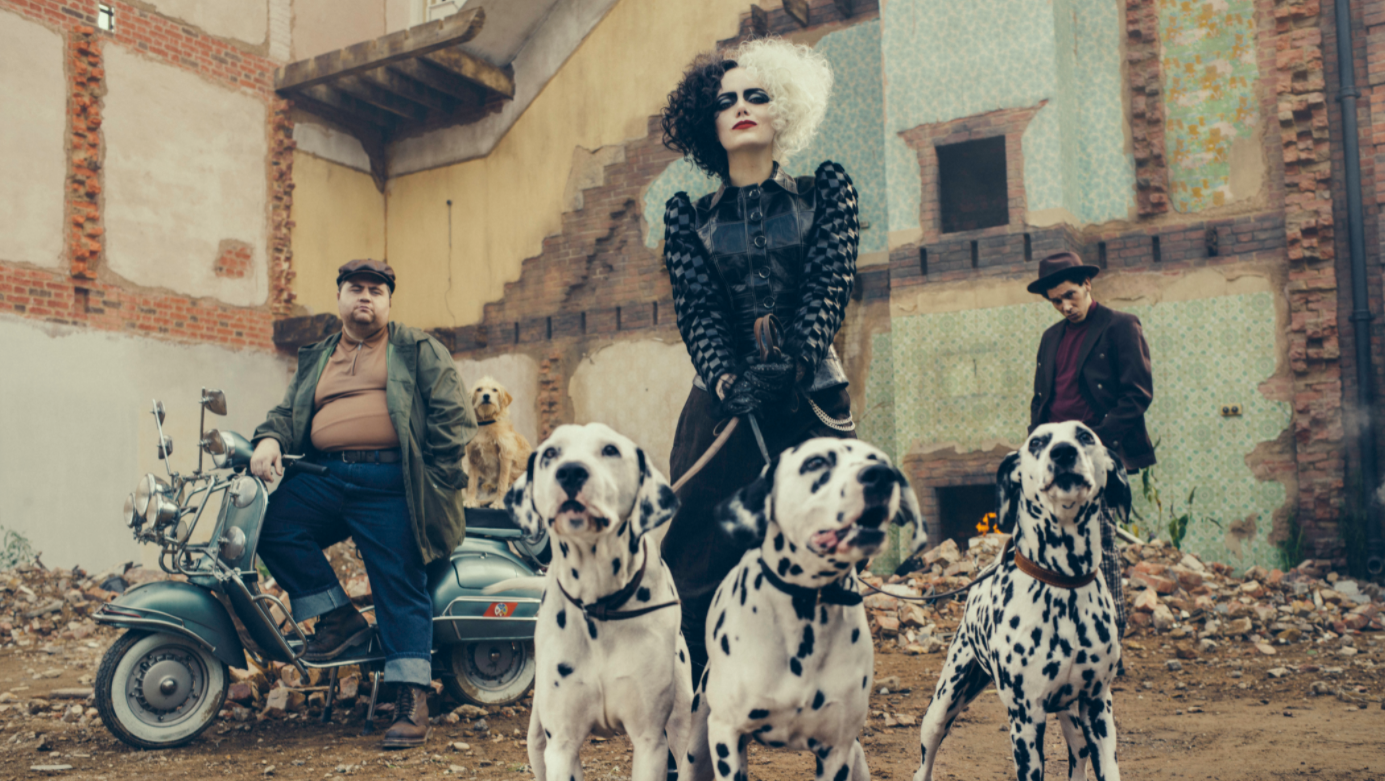 Cruella is Disney’s new live-action film hitting theaters May 28 and available with premium access on Disney+. The film stars Emma Stone and Emma Thompson. It follows Cruella in her early years before the events of 101 Dalmatians. It is a true origin story for the leading villain. We get to see her messy beginnings.

During the press conference for Cruella, BGN got a chance to learn about this new vision of Cruella from Emma Stone and Emma Thompson. They talked about how much fun it was to bring these characters to life.

Emma Stone: They really let Craig and Tony write and make what they wanted to make. I think it’s definitely dark for a Disney movie. Maybe not for, like, a really intense kind of R-rated film. But yeah, it was darker than I’ve seen a Disney movie for a good long time.

Emma Thompson: Oh, well, you know, I drew on the life, obviously. I think if my husband were in the room, he’d say, “And no acting required, really.” I had such fun doing her, because I think I’ve been asking for quite a number of years if I could be a villain, a proper villain. I spent decades playing what my mother used to call, “Good women in frocks.” And, now I got to play a really evil woman in frocks. But oh, boy, the frocks. I mean, they wore me, actually, really is what happened. I had just the best, best time. Every time Em and I would come on set, we’d just look at each other and walk around each other, like we were sculptures or works of art or something, which we were. Everyone created the Baroness, and then I sort of stepped in and just said the words.

Stone: My very, very favorite outfit, which was absolutely ludicrous, was the dress that I wear on the garbage truck because there was a 40-foot train. That wasn’t attached to the dress, because obviously, I wouldn’t be able to move anywhere. So they added that onto the dress at the last minute when I get onto the garbage truck to shoot that part. It was just phenomenal, nothing you would ever be able to even remotely wear in real life. It was such a movie moment. To be honest, there was also that skirt when I cover the car. That was epic, too. Trying to walk up onto a car and then cover an entire car with a switch of the skirt was just fantastic. That is the moment where you’re like, I am in a movie right now. This is never, ever going to happen again.

Stone: There’s quite a bit of dog CGI, but those dogs were always on set. There were a lot of scenes, as many scenes as we could possibly have those dogs be comfortable, they were in. Which was amazing.

Thompson: They had little crosses, and they were sent back to their marks like little canine actors, and they would just go back and stand on their marks and wait, and then get a little treat.

Stone: Estella’s dog, Buddy, whose real name is Bobby, was genuinely, I think, the cutest and sweetest dog I had ever known in my life, and I’ve got a lot of dogs. So that’s saying something.

Stone: It wasn’t as straightforward as getting a call to play Cruella. It was six years ago. Long before we shot the movie, there was sort of an idea. Disney has all this IP, all these characters that they have, and there are brainstorms. It was a process of about four years. Different writers and different things were brought to the table, and it really felt like we might not ever really make the movie of Cruella, because even though she’s such a fun and interesting character, what world would we all want to explore her in that would really make sense and make a good film that didn’t feel shoehorned into this character.

Stone: There is a sort of rejection of Estella that comes at a point. Estella is sweet, but she’s not fully embodied. So I would say there is something about Cruella that’s pretty enticing because she just kind of is who she is. She’s in full acceptance and autonomy there. So, I am kind of interested in that Cruella world. But, that said, she does some things that cross some lines that I don’t think I would necessarily cross.

It’s so much fun to do. For a lot of roles, if you’re someone like me that kind of has a face that’s made of full rubber, you have to always try to contain a little bit. Teaspoons. A little bit instead of buckets. When you get to throw buckets, it’s a joy.

Stone: She’s human, she of course has weaknesses. I would say that this is sort of a movie about her strengths combating her weaknesses. It’s very nature versus nurture, this story. So what she would find a weakness early on, or what her mother would deem a weakness early on with just her ability to really hit the ceiling quickly, her kind of volatility, her reactiveness, becomes sort of her strength through her creativity and through her genius. It’s interesting. I think it really is a movie about how your weaknesses do, sort of, become your strengths in a way.

This isn’t necessarily an aspirational character, so to speak, except for the fact that she is really harnessing her creativity and who she is in a very strong way. She’s learning to accept that who she is in her nature does win in the end. The original character of Cruella de Vil does get to some pretty dark places, and I wouldn’t necessarily call those a positive, but that’s not weak. She is still strong.