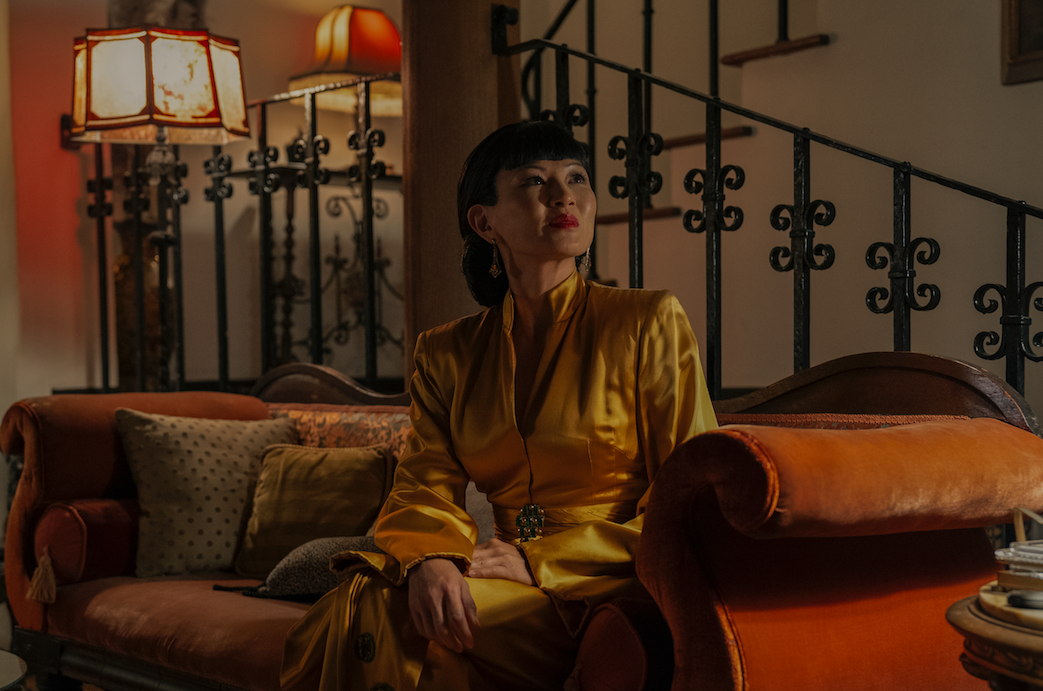 In our second recap of the Netflix series Hollywood, we recap the episode “Hooray for Hollywood Part 2.”

Jack’s mugshot experience is quite flashy. He spends the night in a cell but Ernie bails him out. This isn’t going to look good for his record. Ernie gets Jack working right away. Jack seems to have a regular. Avis (Patti LuPone) loves to have him on her arm. She wants a night out on the town but he can’t because of a screening in the morning. Avis just happens to be the wife of Ace Amberg (Rob Reiner)… yes, as in Ace Studios. She promises to take care of him if he takes care of her. He sure does.

Raymond Ainsley (Darren Criss) meets the beautiful Anna May Wong (Michelle Krusiec) in her home. He makes a case for his script and having her as a lead. However, Miss Wong has dealt with a long-running career of racist characters. She can’t believe anyone would be interested in producing such a movie. Raymond informs her that Ace Studios will be. Let’s see where this goes. He meets his Black girlfriend, Camille (Laura Harrier), briefly before a meeting, with Mr. Richard “Dick” Samuels (Joe Mantello), on his script. The producer is unsure about Anna and gives his bit of history with her. The Good Earth was a role that should have been given to Anna but instead that role and Oscar went to Luise Rainer. Of course, we all know Hollywood has a long-standing history of undermining actors of color and favoring roles for Caucasian actors. Even today, a story like this isn’t new. I digress. Mr. Samuels is adamant that the picture would never have been a hit if Anna was the lead. He gives Raymond a bit of homework — two stacks of scripts.

Jack’s screen testing isn’t the best for producers and studio executives. Dick thinks it’s terrible, yet Ellen Kincaid (Holland Taylor) praises his rawness and asks for Jack as her own. She informs him that he is terrible but getting a contract. He will be paid $25 a week. Gosh, I love Hollywood. Camille happens to be in an acting class taught by the very Ellen Kincaid. The mid-Atlantic accent is all about refinement, and Claire (Samara Weaving) doesn’t like Camille getting attention. Very bitter. Camille is taken out of class and offered a role in a movie as a maid. The director wants her to be a little funnier like Hattie McDaniel. If you don’t get that reference, look up clips of “Mammy” in Gone with the Wind. She went from a mid-Atlantic accent to an uneducated Southerner real quick. How stereotypical. It hurts Camille as much as it hurts us. She informs Raymond about her day, and he does the same about his directing opportunities. Camille pops champagne for the two to celebrate their minor successes.

Jack comes home early the next morning after a long night of servicing. The wife isn’t too happy find him smelling like another woman for the second night. She has cramps that lead her to the hospital where the doctor tells him, straightforwardly, to stop sleeping around if he wants the kids. Wake-up call for him, hopefully.

Raymond and Archie have drinks as they discuss the script “Peg” that Archie wrote about a woman who jumped off the Hollywood sign. Raymond informs him that he is Filipino and dates a Black woman, but Archie lets him know it is nothing like being Black. At least, Raymond can pass. Archie admits that he has never met Dick Samuels, which may come up a problem later. He hopes that one day he can just be seen as just a writer and not his skin color. While at Ernie’s, Archie gets another visit from Roy. Roy mentions that he hasn’t been asked to pay for Archie’s services. This brings up the discussions of how they are not boyfriends and it isn’t possible. Before Archie makes his way out the door, Roy asks him to stay and run lines with him. They are terribly cute as they run the lines and the coaching continues.

The next morning, Camille tries her luck at requesting a role but is told that it is a white role. Raymond, a few tables over, has better luck with the script he has picked. It’s greenlit for production. Claire makes her way over to Jack’s table and flirts with the next upcoming star. She tells him about the greenlit production and declares that she will get the role. Roy meets with Henry Wilson (Jim Parsons) in his office. Henry tells him that he will being signing him because he believes Roy will be a star. Henry gives him details of everything that Roy will work on from looks to sound, including a new name. Before Roy signs off to become “Rock Hudson,” Henry has to suck him off. Henry knows that Roy is gay from the moment he walked in. He really wants to suck him dry, and that is how a star is made.

Raymond gives Anna May Wong the disappointing news that the movie he wanted to initially direct will not be made right away. Anna is certain it will never be made because she can’t “pass” like him. That is painful yet true. Raymond and Archie pull up to his own parking space then bump into Jack where they all discuss their good fortune. The three young men bump into Ellen Kincaid and the astounding Avis Amberg. Good acting skills from Jack. Introductions all around. One is hot while the other is chilling cold. Any guess on who is who?