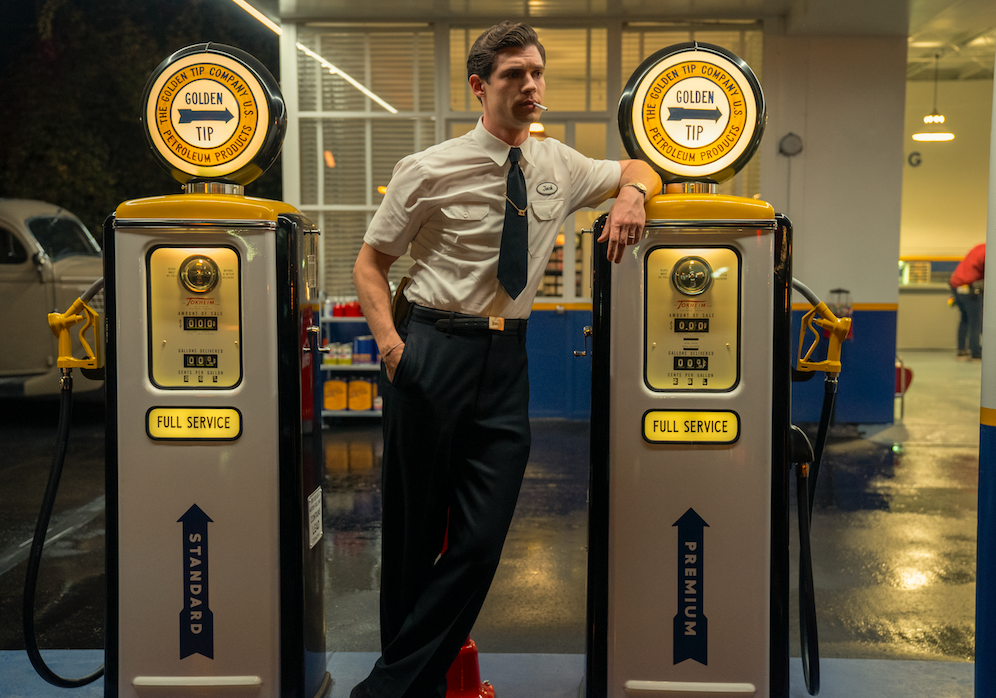 In our first recap of the Netflix series, Hollywood we recap the pilot “Hooray for Hollywood”.

Ever thought about the Golden Age of Hollywood? You have to admit the idea of being around the booming growth of the studios has everyone curious. The moment I saw the trailer for this show, I knew I would be watching it. It has a bit of history, drama, and possible romance but most importantly, young adults who are chasing their dreams. I do love dream chasers.

However, this show depicts Hollywood as if it tackled its biggest problems. There’s a lot of name dropping in this series, but honestly, how could you expect anything less? This is Hollywood after all…

In the opening shot, a theater is showing a clip promising possible fame and fortune in Hollywood and it seems to have captured Jack Castello’s (David Corenswet) eyes with that goofy smile on his face. At Ace Studios, a crowd gathers in front of the gates. Jack works his way in towards his friend Lou who gives him a load get of information in studio lingo and name drops. Up early to get possible shot at being extras in a war film. Lou gets a shot but Jack can’t get into it even though he has military background.

Jack drowns his sorrow at a bar where a much older man, down the bar, pays for his drink. No name, just a suspicious smile. At a bank, we meet Mrs. Henrietta Castello (Maude Apatow), who is expecting and doesn’t seem to fully support Jack’s dreams. Considering that Jack doesn’t make any money and the Missus is a waiter, they can’t get a loan. The unfortunate news takes Jack back to the bar. Ernie (Dylan McDermott), an older man buying drinks, sparks a conversation with Jack about wanting to join the military. His reasons are definitely interesting and none I’ve ever heard of, but sure okay. He offers Jack a job at his gas station that hires good looking men. Since Ernie used words such as “intimate act”, “good looking”, and brought up “his cock” in a conversation, I don’t think this is legal. Jack declines his offer and leaves.

Another day of casting day goes by and Jack yet again is not picked. He comes home to find the electricity cut off and his wife giving him a cold shoulder. He decides to work for Ernie.

Ernie is a pimp and Jack finds out that he’s now able to make $100 per service, by taking women to “dreamland”. His first client, Avis (Patti LuPone), gives him a rundown on her life. How she doesn’t become the star due to looking too Jewish. Jack’s reason for wanting to be a star is cute and romantic. The two continue talking until it is time for him to get naked. He shows her how good his mouth is. Back at the gas station, Ernie pays him but that all goes down the drain when Jack is expected to service Cole Porter, the infamous composer, and songwriter. Jack quits on the spot after Ernie states furiously that Jack better service Cole or find someone who can.

When Jack finds out that he and his wife, Henrietta, are expecting twins, he gets a little desperate. Borrowing an officer’s costume, Jack gets into a theater without paying. He witnesses a Black man, Archie (Jeremy Pope), about to give a man a hand job. He apprehends the man and takes him to Schwab’s, the restaurant his wife works at.

Lord, I wasn’t ready for this type of drama.

The two get to talking as Jack continues to “act” like a cop. It looks like Jack was looking for this man and is offering him a position at Ernie’s. Archie is a Black scriptwriter who makes little money on the side as a gigolo. Nice pick for Jack and Ernie to have. Archie’s first customer, Roy Fitzgerald (Jake Picking), is an upcoming actor too. It looks like a match in heaven. The two talk about dreams and go to “dreamland”.

Ernie’s business is booming. Jack happens to service a woman in casting. She helps him get a walk-on role at the Ace Studio. At home, Jack surprises Henrietta with dinner and money for a down payment on a house. She’s excited and proud of her man being able to pay the bills and get them a home. While working, Jack gets arrested by an undercover cop for solicitation and lewd conduct.

I do not know what I was expecting but here I am waiting to find out if Jack is gonna call his wife to get him out of jail or not. She’s gonna be so mad.