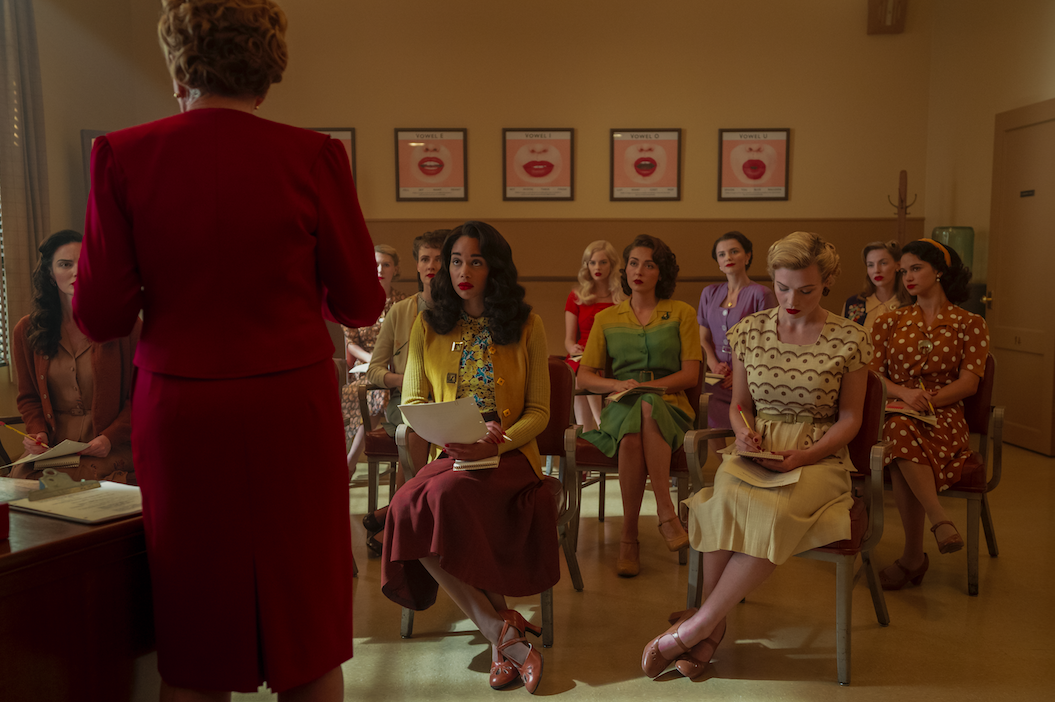 In our fourth recap of the Netflix series Hollywood, we recap the episode “(Screen) Tests.”

I am not sure that I like Ace Amberg (Rob Reiner). He doesn’t want to support the “Peg” script even with the allure of getting another Oscar. Oh no, this man wants “tits, swords, and a boy with a dog that dies.” I don’t know how Dick and Kincaid work under such a guy, but they get him to green-light the movie with a smaller role. Raymond (Darren Criss) and Camille (Laura Harrier) bring up her idea of changing the name and race of Peg to Archie. Archie (Jeremy Pope) isn’t a fan because he doesn’t want this to be a “message” film, but due to Camille’s possible role and his being the writer it could be, even if it is just for a screen test. There’s a lot up against this one movie. Ace is off to cheat on his wife but catches Camille, Raymond, and Archie in a conference room. The man isn’t happy about a colored writer for a script that Dick pitched to him. The whole studio will go down because it is anti-American. He’s old school and refuses for Archie to even have his name on it.

Jack (David Corenswet) puts his foot in his mouth by asking Archie to put in a good word for him. He thinks that Roy (Jake Picking) has a bigger shot with an agent behind him, but Jack has no one. Archie points out that he doesn’t even have his foot in the door but here is Jack asking for help. (I’m familiar with this situation.) Archie tells Jack that he’s got to do it on his own and do amazingly. Ace makes it to see Jeanne (Mira Sorvino). You might recognize her as the lead actress to Camille’s maid role. Just as they are about to enjoy each other, Ace has a heart attack. Avis and Claire rush to the hospital to find Dick Samuels outside the room. Avis wants to know what Ace was doing when it all happened. Dick says it in the nicest way and luckily for all of them, Red Tennent, head of publicity, is there to keep all things hush hush. Avis is concerned for her reputation, of course. Claire is concerned about her screen test that is coming up and how her dad’s death could affect it.

So, Ace has an attorney named Lon Silver (Brian Chenoweth), who makes an appearance at the hospital. He surprises everyone by reporting Ace’s wishes: Avis to run the studio financial wise and have the right to green light any pictures. This means that Dick will have to keep the studio running and produce films but can’t green light any of them. Later, Dick tells Archie that they will need to take his name off the picture. Archie prepares to fight it. He’s not going to let anyone else get the credit for his work.

Montage of four people preparing for a screen test! At the beauty parlor, we have Camille and Claire getting primped for the role of Peg or Meg (it depends on the script at this point). In the gym, Roy/Rock and Jack are buffing up to be the hunky boyfriend to the lead. This movie will make someone a star. They all know it. Jack wishes Roy/Rock luck. He is a darling at times. Roy/Rock struggles through the script due to fear of the director telling him he’s not good enough.

Jeanne is a brave, bold woman telling Avis that she has been having a ten-year affair with Ace. He made her believe that it was fine because Avis was sleeping with a guy from a gas station. Amazing, he knew. I would never thought Avis would be so caring to the other woman, but she proves me wrong by asking Jeanne to stay on her contract.

During dinner, Camille and Raymond get a surprise visit from an upset Archie. He releases all that he has felt writing the story meant for white people, and now he has to write the story for him and Camille. The two men assist her in preparing for the screen test while in another part of town, Jack and Claire do the same. Camille struggles with showing emotion while Jack struggles with being a good guy.

The day of the screen test has everyone nervous, including me. Don’t ask me who I’m rooting for. First up is Roy/Rock, who is a bundle of nerves messing up his lines. Henry (Jim Parsons) walks off as Roy/Rock struggles. Jeanne gives him words of encouragement when he finally got it at the end. The two leading ladies have a bit of heart-to-heart before their shots. Claire gives Camille a bit of advice on tearing up. Claire goes up first and seems to waver when Camille arrives on set. Raymond won’t allow Camille to even put a bit of Vapor Rub to get the tears needed for this scene. He is quite the supportive boyfriend.

Well, Henry is real dirty. He basically blackmails Avis into giving his client the role in Peg. I wonder who else Henry is watching and keeping photos of for this purpose. We finally get to see Camille shed a tear for the role. Avis is ready to Roy/Rock the role but Raymond requests that they see one other actor’s attempt. Jack is lucky that Avis has a sweet spot for him. She chooses him right away, but she chooses Claire for the role as Peg. She’s just like her husband. No wonder he picked her. She rushes off to see Eleanor Roosevelt (Harriet Sansom Harris) and leaves the rest to deal with casting. Jack is ecstatic that he got the par,t but Ernie isn’t as happy for him. Ernie tells Jack that he was hoping that he had a shot in a play with Vivien Leigh but Ernie never got the call. That cough that Ernie has will kill him soon, I’m sure.

The luncheon with Eleanor Roosevelt takes quite the turn when Avis mentions that she is working as head of the studio but couldn’t make the choice of picking a colored girl for the role. This moves Eleanor Roosevelt to visit the studio, speak about what she has seen in the south and Jim Crow laws, and encourage them to choose Camille for the role. Of course, Dick and Kincaid agree with her, but Avis makes points as to why they can’t. Eleanor Roosevelt paints a picture of what it would mean for a poor Black girl to see herself in a movie, the value and worth that she would experience seeing someone like herself on the screen. I’m sure we have all been there. The first time you see yourself represented in a TV show and film that is a positive role means everything! This can absolutely change the world. It’s all up to Avis now.