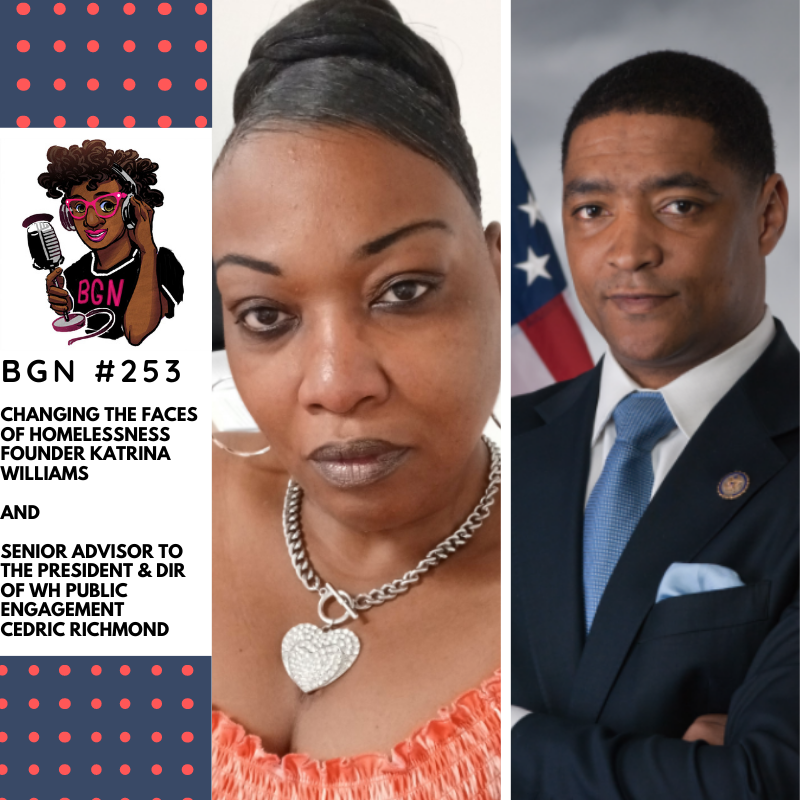 This week’s episode of the Black Girl Nerds podcast is all about public and community service.  This 2-segment episode features Katrina Williams, founder of Changing The Faces of Homelessness and Cedric Richmond, advisor to the President and  director of the White House Office of Public Engagement.

Segment 1: Changing the Faces of Homelessness was founded by Katrina Williams, a Mental Health Case Manager who worked with the Regional Behavioral Health Authority under Value Options and Magellan Health Services for over 15 years in Phoenix, AZ.  Katrina Williams recently relocated to Los Angeles CA and began working for Volunteers of America as a Case Manager for the Hope for Homes Shelter Program in Pomona CA.  During her employment with VOA one of her clients ended their life via suicide with her client’s sudden death, she realized the severity of the Los Angeles homeless crisis and developed the CFH supportive housing Program where she provides realistic resources (employment, counseling etc.) to meet her residents’ realistic goals with housing.

Segment 2: Cedric Richmond serves as a Senior Advisor to the President and Director of the White House Office of Public Engagement. Richmond served as the National Co-Chairman of the Biden-Harris Campaign and a Co-Chair of the Biden-Harris Transition Team. Since 2011, Richmond has represented Louisiana’s 2nd Congressional District in the United States House of Representatives. During his time in Congress, Richmond served on the House Ways and Means Committee, the House Committee on Homeland Security, the House Committee on the Judiciary. He was the House Democratic Assistant to the Majority Whip, a member of the New Democratic Coalition, Chairman of the Congressional Black Caucus, and, most recently, Chairman of the Congressional Black Caucus Foundation.