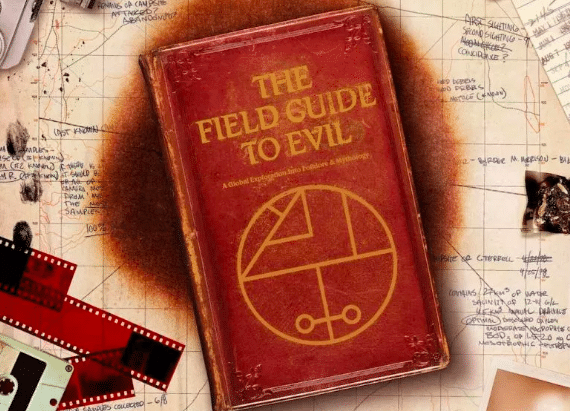 Using an appropriate gimmick of an old, bound medieval manuscript — whose paper you can almost smell through the screen — as well as introductions to each story situating them in their particular culture, The Field Guide to Evil is a fascinating collection.

“The tale is a lie. What it tells is the truth.” This paradox that drives human understanding of folk tales and mythology is the engine behind the horror anthology The Field Guide to Evil. Explored through eight tales taking place in Austria, Turkey, Poland, USA, Greece, India, Germany, and Hungary, this virtual and global journey into evil is a disturbing cornucopia of reimagined folktales by a team of international directors telling stories from their home countries. And it is (mostly) terrifying.

The film flips back and forth through the book as each story is selected, almost taunting the viewer with all the stories in there that we didn’t get to hear as much as tantalizing us with the one coming up next. The music is eerie and atmospheric, giving this anthology horror an almost historical fiction feel, as if we’ve entered a gothic non-fiction with aims to give us nightmares for at least a week. If not longer.

The first installment is directed by Severin Fiala and Veronika Franz. “The Sinful Women of Höllfall” is based on the Austrian folk creature The Trud, who will come to sinners at night to choke and otherwise torment them. Kathi (Marlene Houser) is a naughty girl who enjoys sucking milk right from a goat’s teat. On her way to do laundry in the creek, she spots Valerie (Luzia Oppermann) doctoring her underwear so that the village women won’t know she’s pregnant yet. Religion and an underlying fear of female sexuality — drive this increasingly horrifying story to its shocking conclusion.

“Haunted by Al Karisi the Childbirth Djinn”, directed by Can Evrenol, is a moody parable from Turkey that explores women’s roles in the home as caretaker and mother. It is also a wicked portrait of the insidiousness of postpartum depression quickly turning into postpartum psychosis through the metaphor of an evil spirit who doesn’t grant wishes, but instead eats children and psychologically tortures their mothers. Fans of Jordan Peele’s Us will love the echoes of that film here.

From Poland’s Agnieszka Smoczynsk, “The Kindler and the Virgin” examines the truly grotesque lengths that some will go to in order to avoid fighting a war. This apt social commentary comes wrapped in a folktale about the Polish woodland spirits who grant men special powers. These 20 minutes were so disturbing it made my stomach hurt. I loved it.

Calvin Lee Reader’s “Beware the Melonheads” tackles the Appalachian legend of humanoid cannibal children living in the woods, adding a touch of camp and buckets of gore. Featuring a creepy cameo from former Twin Peaks and Carnivale actor Michael J. Anderson, this story will make you think twice before AirB&B-ing that charming cabin in the woods. But that said, this installment felt almost like an intermission since it carried few of the themes in particular of religion and female power that course through the rest of the anthology.

“Whatever Happened to Panagas the Pagan?” has a distinct Mandy style heightened by its setting in 1984, as well as its director Yannis Veslemes also hailing from Greece like Panos Cosmatos. This cinematic installment in The Field Guide to Evil had shades of 1980s Tim Curry classic Legend with its underworld and goblins. But here, it is the humans who are monsters. This portion was beautiful and atmospheric. I could have watched a full-length feature of Veslemes’s strange worldbuilding.

Next, we travel to India in Ashim Ahluwalia’s “The Palace of Horrors”, based off a Bengali folktale about a mad king who liked collecting strange-looking people and keeping them chained up in his basement. Gentry (Mark O’Gleby) is a buyer for Ringling and has come to see the king about acquiring some of the king’s “freaks”. This was one of the weaker stories in The Field Guide to Evil mainly since it did little to upend a colonial narrative in its telling: the narrator is a white Brit. While the ending does hint at violent repercussions and revenge for cultural appropriation and colonialism, it was a bit too vague to fully bring the point across.

Katrin Gebbe’s “A Nocturnal Breath” examines the German creature Adrude, or Drude, a spirit that steals in and out of a person’s body at night and does terrible things while in control of a person. This metaphor for illness — and epilepsy in particular during the 1700s, which used to be considered possession — takes quite a surprising and grisly turn. It’s themes of incest alone make this one creepy tale, even without the Drude’s presence to ramp it up further.

In its final tale from Hungary, Peter Strickland’s “Cobbler’s Lot” is an abstract retelling of a folktale about two shoemaker brothers battling for the hand of a beautiful princess. Told in a silent movie style, with beautiful and ornate cards that spell out the story, Strickland’s singular vision is at its peak here. With characteristic grotesqueries coupled with a healthy sense of humor, this story perfectly closed out a weird and scary set of stories to haunt your dreams.

Themes of religion, fanaticism, the “dangers” of female sexuality, family violence, incest, trauma, the clash of old ways vs new, as well as capitalism, colonialism, and desire weave each story together into a bizarre and haunting tapestry that works really well as an anthology. Because The Field Guide to Evil tended toward the eurocentric, I hope that this is only the first of many more volumes that will have the opportunity to reimagine folktales from a more diverse mix of countries. There are 195 countries in the world. Divided by eight stories per film, I am so here for each and every of those 24.4 parts. Also, I call dibs on Sri Lanka.

But I do have to leave you with some words of warning about The Field Guide to Evil: Do not watch this film at home, alone, at night. My hall light is going to be on for a few days while I attempt sleep, I can feel the night terrors coming on already. For a horror movie, there is no higher praise or more enthusiastic recommendation than anticipated sleepless nights after watching it. The Field Guide to Evil sets up a new cross-cultural paradigm for the anthology horror film, and it is most welcome.