I am sure it’s no surprise that comics, like other cultural things, tend to have a “regionality” to them. Yes, I know “regionality” is not a word, but the thesaurus just didn’t get me where I wanted.

I frequent my region, the mid-Atlantic (primarily the DC metro area), and over the last couple of years of routinely going to the conventions in my area, I tend to run into the same folks. If you have the funds to go to New York, Atlanta, or San Diego for the bigger events, you get exposed to a lot of great independent artists and writers, but it can be a bit overwhelming. Sometimes, however, you don’t always see all that there is to offer or run out of funds and miss an opportunity or two.

While in Pittsburgh, I picked up several books I passed on either at NYCC or maybe in Baltimore a year or two back. To be honest what intrigued me this time was the behavior of the colleague, Doug Simms, an artist and writer of one of the comics, who I later found out started Legacy Rising Publishing in Columbus, Ohio.

I don’t know what it was — maybe the deference to the creator because when I stepped to the table, he stepped back. I think sometimes we forget the folks (like Jamie, holla!) who give us a platform to shine, so I thought I’d take a sentence or two to hype Doug. Doug indicated he started Legacy Rising in Columbus, Ohio in the winter of 2015. He reached out to individuals he knew personally in the creative comic book community in the area and they all quickly said yes.  Legacy currently has nine creators from Ohio, another six that are spread out all over the US, and one in Canada. I would like to focus on one of them, Michael Watson, the creator of the Hotshot Verse. 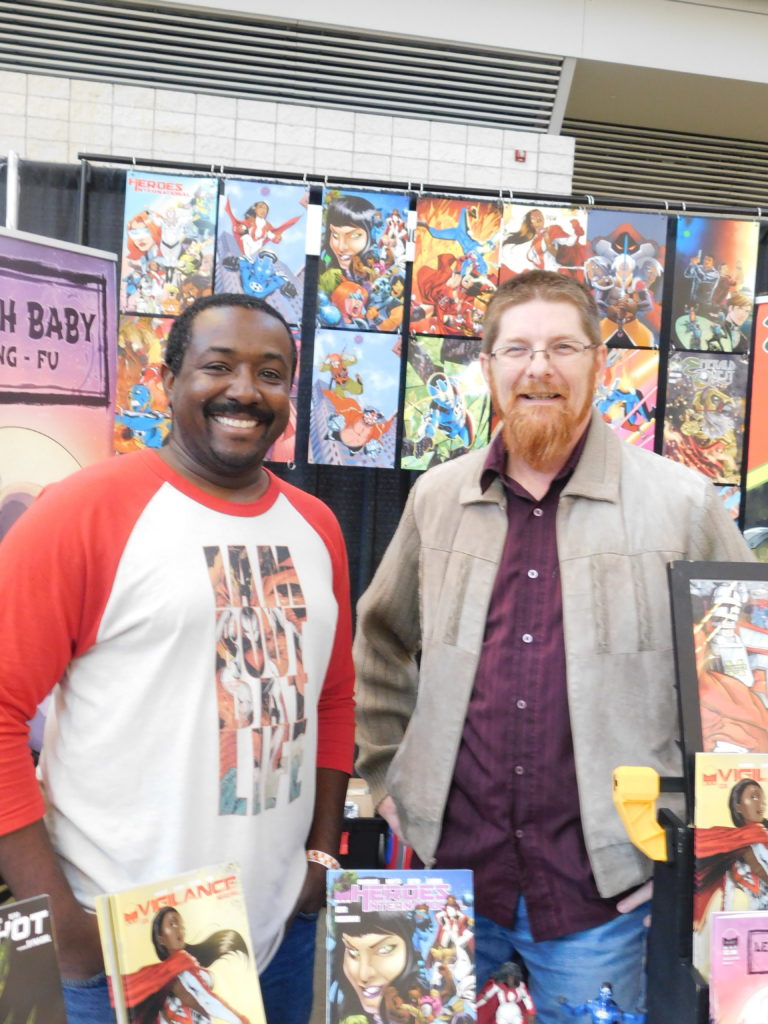 Watson is definitely a lover of comics and his universe a labor of love.  His main character, Hotshot, better known as Michael, is an art student in Ohio. Hotshot Issue 1 (Cara Kelly – writer; Michael Watson –art) begins with Hotshot about to kick the Tyrant Lizard’s scales when Dyna-Girl (no not that one, for those of you who were alive during the theatrical release of Star Wars) collides with him. In this issue, Hotshot struggles with his perceived insensitivity for missing another date with his girlfriend. Of course, helping Dyna-Girl get home was too taxing to take the time to give her a call. 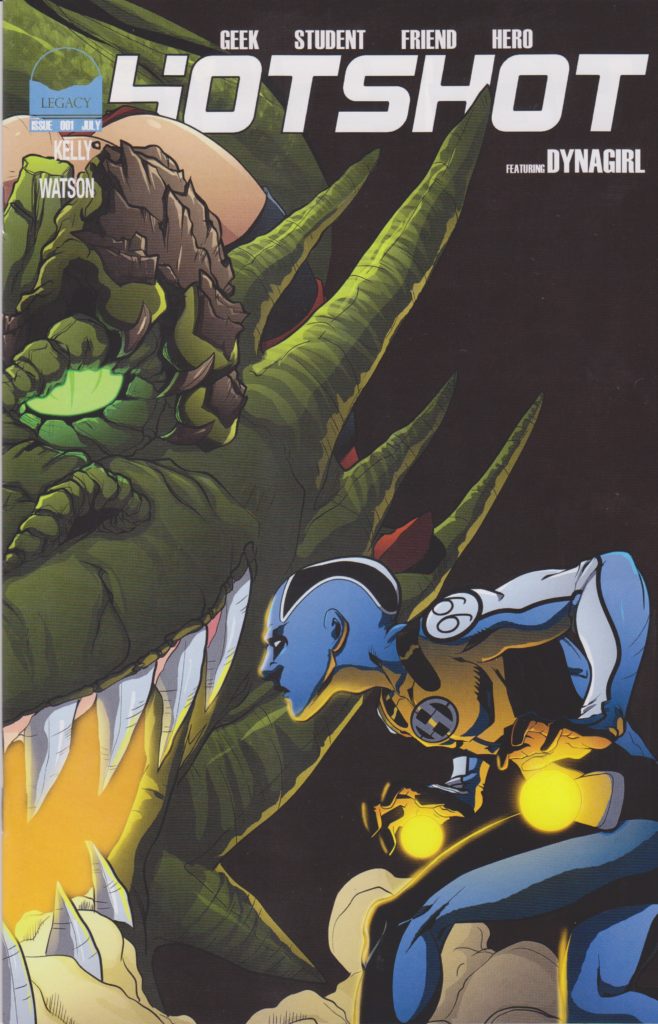 The issue continues with a brief explanation of the Zero-Event, which the whole Hotshot Verse is based on.  For your information, a large number of heroes and villains (called extra humans) amassed in the Sahara Desert. A huge energy release occurred and 40 heroes and villains were lost with no bodies recovered. With some of the mightiest heroes gone, Hotshot and other extra-humans step up to fight for good against the new threat, the Queen of Dragons. Their ongoing travails are detailed in Heroes International.

One of my favorites has her own title, Vigilance, written by Micah Cox with art by Val Nogueira and Mel Joy San Juan. Vigilance is a tall, black, possible weave-wearing, slender, fully-clothed (albeit in spandex) super-heroine. She was discovered by Justice (a sort of black Superman) in a crater with no memory of her origins. She seems to be pretty much invulnerable, with no Kryptonite identified yet and can fly.  Similar to the ongoing Wonder Woman story, she has to learn the language, customs, deal with the second-guessing that comes with her status, and joins the Extra Human Division, while saving lives all across the planet. Who has time for it all? 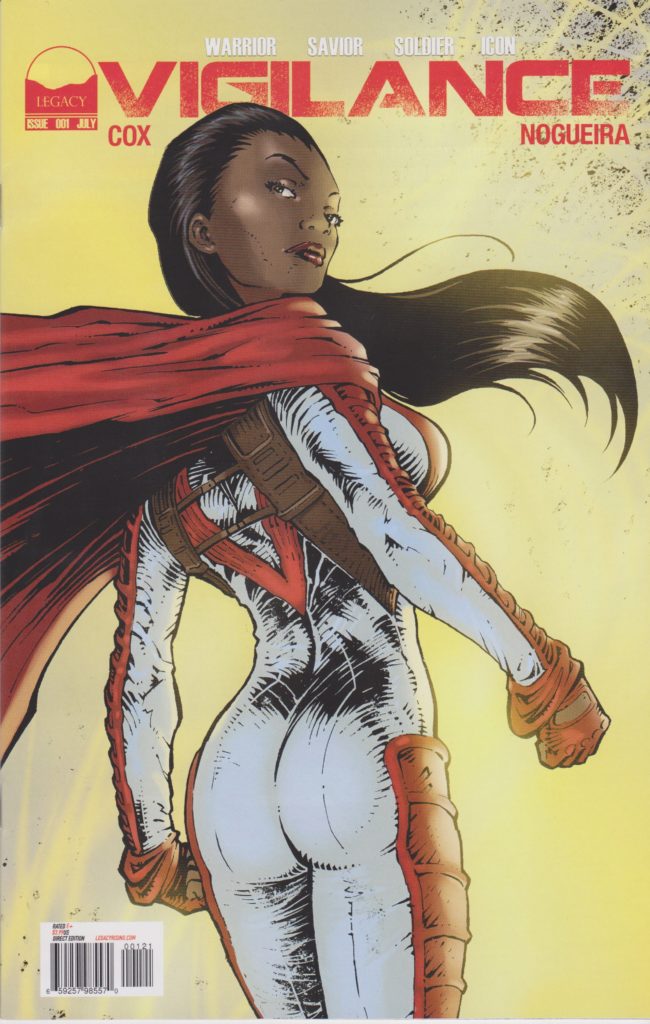 On top of that, there are rumblings starting with a senator about the vigilantes like Vigilance running off to save the day. I look forward to finding out what the senator intends to do about it as a new threat lands on Earth!

Overall, I like the idea of the Hotshot Verse. It fits in well with the “Modern Age” of comics. Much like how the big publishers are trying to give a behind-the-scenes look of their heroes with recent movie offerings, Hotshot tries to answer the question of what happens after the big bad is defeated: How does the world recover and reform?

There seems to be a lot of promise of intrigue with the government coming to term with a whole other group of extra humans both heroes and villains alike. For most heroes, I have found the best heroes have truly good villains. Hopefully, we will get to see what lands next.

Legacy Rising indicates that new issues will be available in 2017.