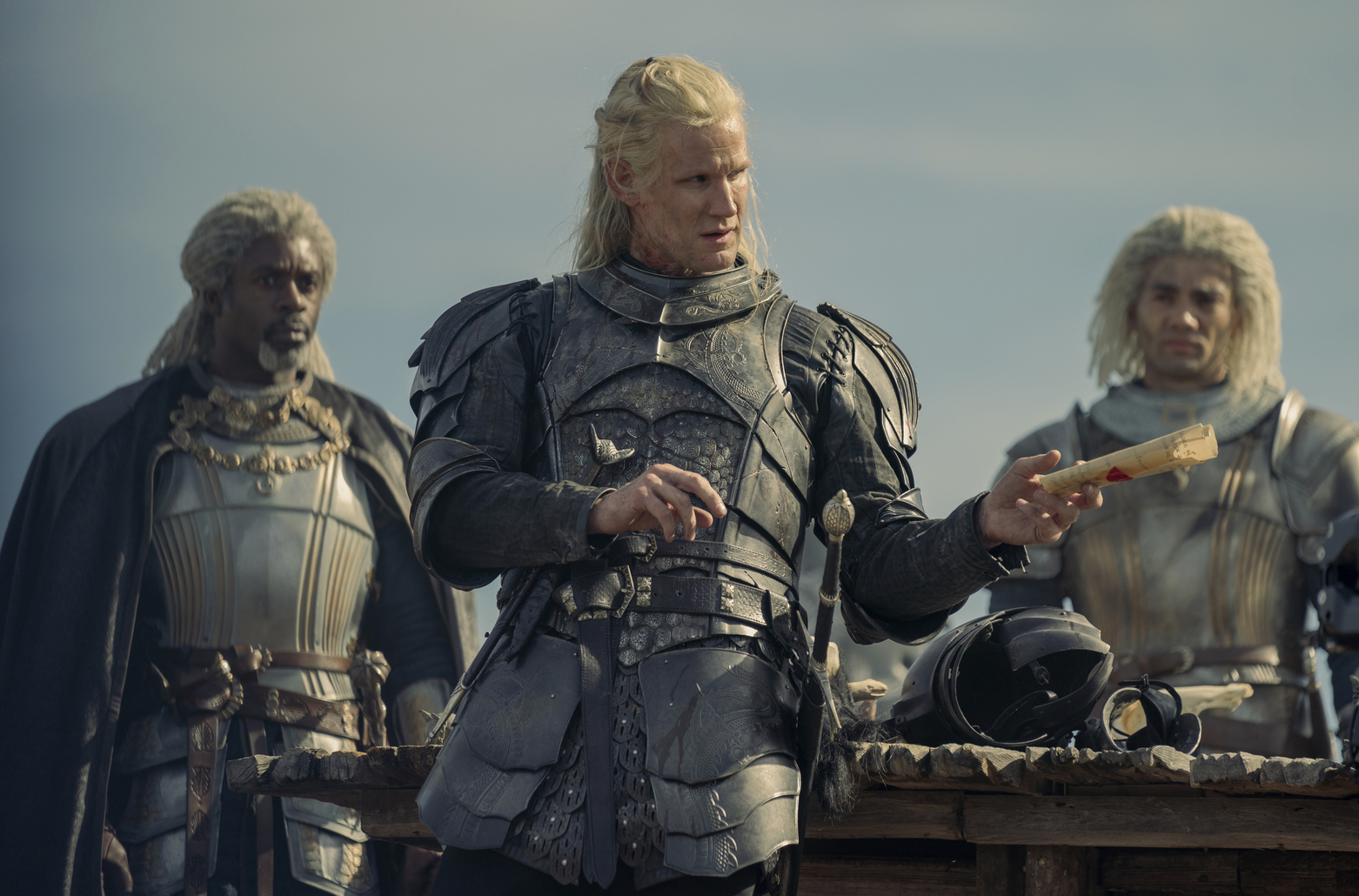 Here we are again. Last week we dealt with a rogue prince and witnessed a princess who decided to take matters into her own hands. The Stepstones are on fire and Craghas Drahar aka the “Crabfeeder” is tormenting yet another victim.

Suddenly, Caraxes flies in with a breath of fire and Prince Daemon (Matt Smith), the dragonrider, swoops in to end this chaos. Daemon walks into a cave to confront Craghas Drahar and tells him to come out and face him. Meanwhile, Caraxes is setting most of the Triarchy ablaze.

The next scene transitions to a feast at the king’s court and we see Aegon, the son of King Viserys (Paddy Considine) and Queen Alicent Hightower (Emily Carey), now 2 years old. Otto Hightower (Rhys Ifans) conversing with Hobert Hightower (Steffan Rhodri) discusses the succession of King Viserys (Paddy Considine), and Lyman suggests Viserys should name Aegon heir sooner than later. Otto believes that the king is not in such a hurry to make such a decision, to which Lyman states that, as Hand, it is his duty to make certain that he does.

Princess Rhaenyra (Milly Alcock) is sitting under the weirwood tree at the godswood. She has a musician play the same hymn repeatedly while she’s reading. The tone in this scene shows the power dynamic shift between Princess Rhaenyra and now Queen Alicent. When Alicent comes outside to bring Rhaenyra inside to celebrate with family, Rhaenyra addresses her as queen. Alicent is also pregnant yet again.

As the king, queen, and princess travel to celebrate the second name day of Prince Aegon, a mild quarrel between Viserys and Rhaenyra ensues. He shares how someday she should also bear children, and she has no interest in this lifestyle whatsoever. Rhaenyra is still resentful of being overlooked as heir to the throne and the animosity still lies deep.

The next scene is at another party for Aegon. A man with a lame foot by the name of Larys Strong (Matthew Needham) asks to sit with a group of women. While he doesn’t say anything in the scene, his eyes tell you everything. He’s clearly there to eavesdrop and not just be a passive listener. There’s a discussion about who is responsible for the war; some say Daemon. Rhaenyra does not believe that the crown is at risk.

Rhaenyra leaves the room and meets Lord Jason Lannister (Jefferson Hall), and he tries to charm her. She sees right through this and knows that her father set him up to try to get him to hook up with her. This infuriates Rhaenyra, and she confronts her father Viserys. They argue in front of their guests at Aegon’s party. Viserys insists that she must get married. Otto interrupts and says there has been a sighting of a white hart. White harts are rare and magical creatures.

Meanwhile, Rhaenyra runs off, and Ser Criston Cole (Fabien Frankel) runs after her. He catches up with her in the woods, and she shares with him that her father tried to sell her off to Jason Lannister. Criston in jest asks Rhaenyra if she wants him to kill Jason. And she gives him a wry smile. In this scene, Criston shares that being named part of the King’s Guard is the highest honor he could hold, and he owes it all to the princess.

While hunting for the white hart, Viserys carries a heavy heart. He’s obviously conflicted at this moment. The scene intercuts with an earlier moment when Jason Lannister presents him with a weapon to help kill the white hart. Jason insists he would make a good husband for Rhaenyra. When Jason questions how Viserys will choose his next line of succession, this angers Viserys and he reminds Jason who he’s speaking to. Otto Hightower, who remembers what Lord Lyman Beesbury told him previously, wants to ensure that the king focuses on naming his next heir. He suggests that Rhaenyra should be betrothed to her 2-year-old brother Aegon.

A new low for Otto here.

Viserys laughs at this idea, as he should, and he finds the idea absolutely ridiculous. Viserys gets frustrated and is over the politics. Otto decides to speak no more of it.

In the next scene, Lord Lyonel Strong (Gavin Spokes) opines to the king about who would be the best match for Rhaenyra. He suggest the son of Lord Corlys Velaryon (Steve Toussaint) should be betrothed to her. He believes this because Ser Laenor Velaryon is of pure Valerian descent and belongs to the wealthiest house in the realm.

Ser Criston Cole and Rhaenyra are still in the woods. A beast, more like a warthog, comes out of nowhere and attacks them. Rhaenyra grabs a knife and stabs it to death.

In the next scene, Alicent asks Viserys if everything is all right. He tells her he named Rhaenyra to protect the realm from Daemon. He confesses to Alicent that his obsession over having a male child inevitably killed Rhaenyra’s mother. He also believed that naming her heir would make things right and that he never imagined he would remarry nor have a son. He wonders if previously naming Rhaenyra heir was the wrong decision.

When Viserys and his men go to the woods to find the hart, they do discover one, but it is not white. This is disappointing to Viserys as the omen of his heir may not be as what he intended. The same look is shown on Otto’s face as well. Viserys reluctantly takes the weapon Jason Lannister gifted him and kills the hart.

As Rhaenyra and Criston overlook a cliff after a rough night, a white hart walks up and stands stoically. This is the omen that confirms that Rhaenyra is indeed meant to be the heir to the realm. Rhaenyra then comes back to town with dried blood in her hair and a dead warthog carried in from her kill earlier.

In the following scene, Otto meets with his daughter Alicent and says that when she bore the king she ended 15 years of uncertainty and doubt. This meeting is intentional for Otto to convince Alicent to guide Viserys to name Aegon heir to the throne. Alicent goes to Viserys’ private chambers. The topic is actually shifted to the current war at the Stepstones, and she convinces the king to provide aid to Daemon and Lord Corlys.

Rhaenyra still feels resentment towards Viserys for peddling her off to get married for the sake of the realm. When Daemon gets the message that his brother Viserys has sent aid, he beats up the messenger. Daemon then travels to Crabfeeder’s lair and waves a white flag as a sign of surrender. What appears to be Daemon giving up is a fakeout. He starts killing members of the Triarchy. Ser Laenor Velaryon comes in on Seasmoke yelling “Dracarys” and destroys most of the fleet. The battle ends when Daemon pulls the corpse of Crabfeeder out of his lair with his entrails hanging out.

Tune in with us every Sunday night at 9pm ET on Twitter using the hashtag #DragonsYall as we live-tweet each episode this season! Tune into our #DragonsYall Podcast Show shortly thereafter! You can catch the series during the broadcast on HBO or stream it later on HBO Max.