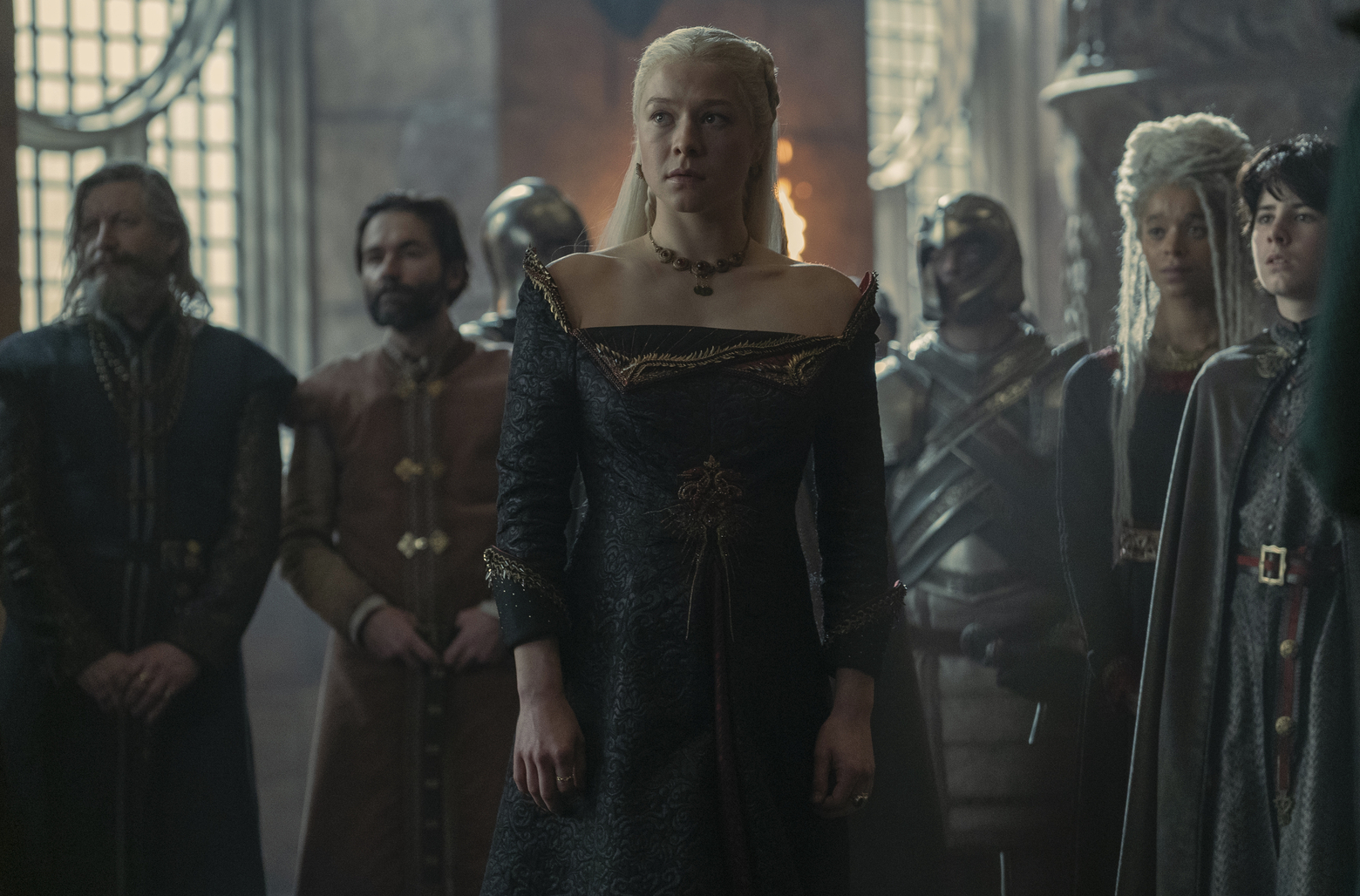 In Episode 8 of House of the Dragon, “The Lord of the Tides,” 6 years have now passed. In that time, Queen Rhaenys Targaryen (Eve Best) has not seen her husband Corlys Velaryon (Steve Toussaint). Sadly Corlys was seriously injured in battle at the Stepstones, and his neck was slashed by an enemy’s dagger. He fell overboard into the sea, and his wound was severe. Corlys is now suffering from a fever, burning within. Ser Vaemond Velaryon (Wil Johnson) suggests the blood fever has killed men half of Corlys’ age and wants to know who will take the Driftwood throne.

Rhaenys insists that Lucerys Velaryon (Harvey Sadler) will be next in line as it was her husband’s desire. However Vaemond says he is of blood and the closest king he has left. Vaemond is concerned if the Velaryon bloodline will be snuffed out by puffs of Strong blood. He finally states that while he appreciates Rhaenys’ support, he does not need it.

Meanwhile, Daemon Targaryen (Matt Smith) unearths a dragon’s egg from Syrax in a warming chamber. He found three and hands one off to one of the dragonkeepers. He in turn, gives Daemon a message from his daughter Baela Velaryon (Bethany Antonia).

A now pregnant Rhaenyra Targaryen (Emma D’Arcy) is teaching her son Jacaerys Velaryon (Harry Collett) to learn to speak high Valerian. Daemon delivers Baela’s message to Rhaenrya, and she believes her succession is now under a great threat. She also believes that Rhaenys thinks they killed Laenor Velaryon (John Macmillan) and she will undermine her power. Daemon suggests they head back to King’s Landing.

Queen Alicent Hightower (Olivia Cooke), now wearing a necklace with a seven pointed star, the symbol of the faith of the seven, is sitting at the Small Council meeting. Rhaenyra and Daemon visit a very ill Viserys Targaryen (Paddy Considine) in his bed. He’s also fighting dementia. As Daemon informs his brother of the news of Corlys’ injury and the threat of the Driftwood throne, Viserys tells him Otto will handle it. Daemon insists that Viserys should affirm his position as king and have Lucerys as successor. Rhaenyra introduces Viserys to his two grandchildren (and grand-nephews): Aegon and Viserys — the children she had with Daemon.

In the next scene, Alicent meets Dianna, a servant girl who describes a sexual assault from Prince Aegon Targaryen (Tom Glynn-Carney). Alicent gaslights the young girl into thinking that she may not be believed by the public and makes her drink moon tea (a drink used to abort pregnancies) just in case.

Rhaenyra and Daemon confront Queen Alicent in the king’s quarters and are infuriated by how the maesters are taking care of him and also how he is ruling the kingdom in his condition.

Luke speaks to his brother Jace and is concerned about his succession. He thinks that because he doesn’t look like Laenor and instead looks like a Strong that his becoming the Lord of Driftwood will always be questioned. Ser Criston Cole (Fabien Frankel) trains with Aemond Targaryen (Ewan Mitchell) — who looks a lot like Matt Smith — in a duel, and Aemond proves he’s a swift fighter. Criston goes on to tell him he will do well in tourneys in no time, to which Aemond says, “I don’t give a sh*t about tourneys.”

Vaemond shows up to King’s Landing and manages to ally with Otto to convince him that he should lead Driftmark. The threat of war looms, and a child should not be in power when the day comes. Rhaenyra confronts Rhaenys and states that this is a play to disinherit her son, and Rhaenys is still angered by what happened to her son Laenor. Rhaenyra explains that she loved Laenor very much and that she was not complicit in his death.

Rhaenyra proposes that Rhaenys should back Luke’s claim and betroth Laena’s children to hers. Baela will be heir of the seven kingdoms. Rhaenys declines her offer and says the Hightowers will land their first blow and she will stand alone. Rhaenyra goes to her sick father and begs him to defend her claim, but sadly he’s so far gone in his illness he can’t comprehend what she’s asking.

Otto sits on behalf of the king on the Iron Throne to discuss the matter of succession at Driftmark. Vaemond petitions himself to be the next in line to inherit the throne since he is of pure Velaryon blood. As Rhaenyra stands before Otto to begin her petition to have Lucerys as heir, Viserys interrupts and walks into the throne room. Wearing a mask over half of his face (probably due to being disfigured from his leprosy), he manages to walk over to the throne in his very weakened condition. As he struggles to get up the steps to the throne, Daemon helps him, which is a full circle moment from Episode 1 when these two had quite the tempestuous relationship.

Viserys says the only person to honor Corlys’ wishes of succession would be that of Rhaenys, his wife. She steps up and says that Lucerys was in fact who Corlys desired as heir. She further goes on to tell Viserys about Rhaenyra’s proposal to betroth her children to theirs and that she heartily agrees.

An infuriated Vaemond stands before the king and is defiant against his ruling. He refuses to accept it, calling Rhaenyra’s kids bastards and her a whore. Daemon suddenly decapitates Vaemond with his sword. Viserys suffers from sudden exhaustion and is escorted out of the room.

Viserys has dinner with the Tararyens and Hightowers. He takes off his mask and exposes his face, and he looks like the Phantom of the Opera. An eye is missing and most of the skin has deteriorated from his face. During this scene, Aegon is still antagonizing Jacaerys, which proves their feud isn’t ending anytime soon.

The families finally have a moment of reconciliation and peace. Viserys has a stunned look on his face at first, but then a look of relief. This is the moment he’s been waiting for all of his life and during his reign as king. Sadly, he cannot enjoy it for very long because he is in pain. However the peace doesn’t last when a roasted pig is placed in front of Aemond and the Velaryon boys laugh, dating back to Episode 6 when the boys teased Aemond with a pig. Aemond makes a toast and refers to the boys as “strong” using emphasis on the last name of Harwin Strong. The conflict between the boys arises again. Rhaenyra tells Alicent that she and her family should head back to Dragonstone.

Putting Viserys to bed, Alicent realizes his dementia has advanced when he tells her that she is the “prince who was promised.” The last shot is of Viserys who breathes slowly and rests in his bed.