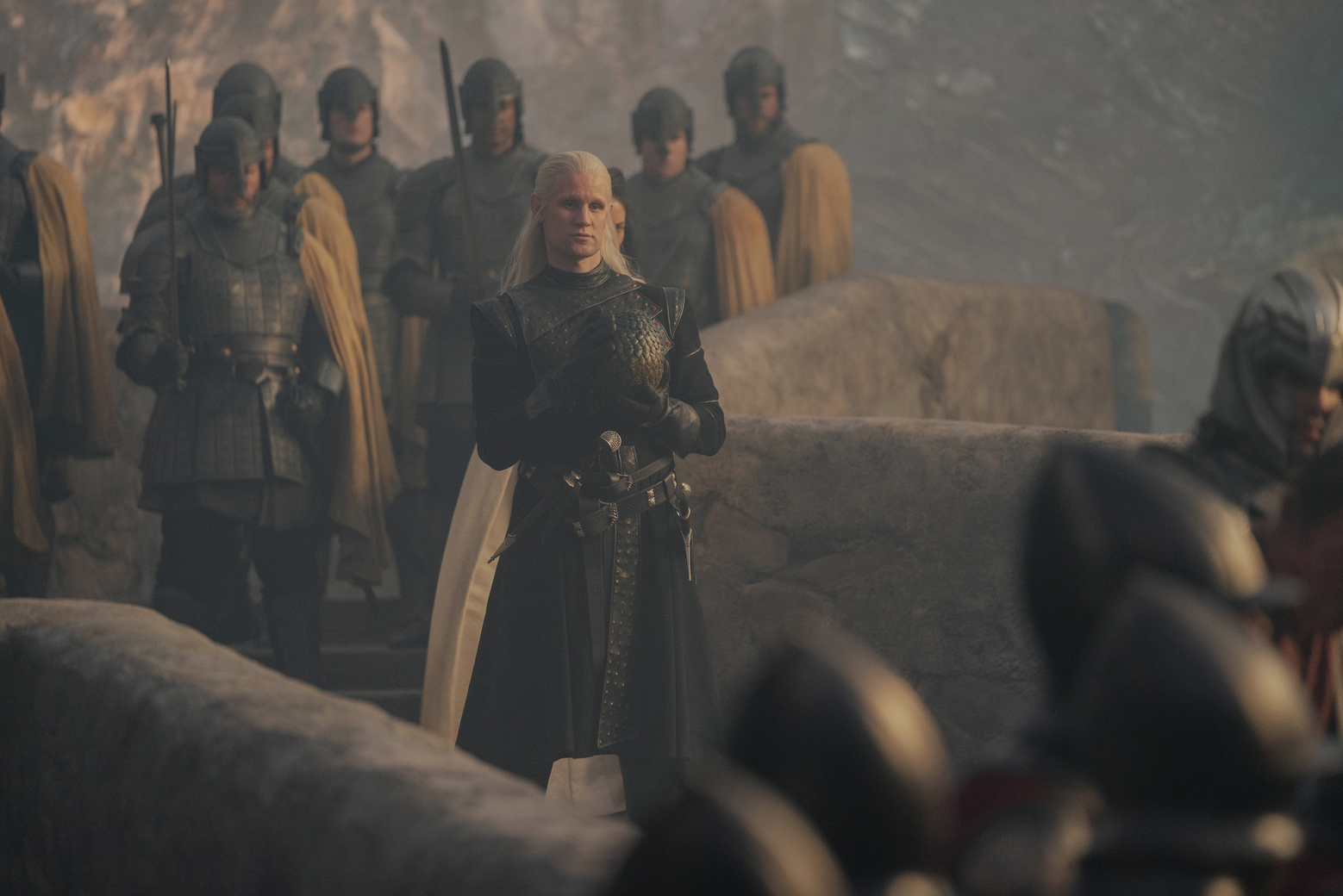 Welcome back. You survived last week’s wild turn of events on House of the Dragon, and the games played in Westeros keep heating up! Tonight’s episode is aptly titled “The Rogue Prince,” and by the end of this recap you’ll understand why this story was branded with such a title. The opening scene takes us to the Stepstones, a place infested with crabs and riddled with bodies and corpses who are victims of Craghas Drahar aka the “Crabfeeder.”

Meanwhile, the council is seeking to replace a recent member of the King’s Guard who passed. Lord Corlys Velaryon (Steve Toussaint) storms in and says four of his ships are gone and he’s angered that the Triarchy’s presence in the Stepstones is not of priority among the council.

Otto Hightower (Rhys Ifans) offers Corlys compensation for his ships. But financial reimbursement is not what Corlys wants — nor what he needs for that matter. He wants to seize the Stepstones by force and burn out the Crabfeeder. However, King Viserys (Paddy Considine) is not prepared to start a war with the Free Cities. Corlys continues to get indignant with the king, so Otto cautions him that a seat at the table with the king does not make him his equal.

While inside of the council room, Princess Rhaenyra (Milly Alcock), who has been eavesdropping on the discussion the entire time, offers a suggestion to use dragonriders to help fight and defeat their army. Corlys likes the suggestion and immediately Otto suggests the Princess would be of value elsewhere. It’s at this moment that Rhaenyra sees where her place is with the council and her king.  Rhaenyra is sent to preside over the new King’s Guard posting and choose the next knight to protect her. Rhaenyra is unimpressed with the knights presented because many do not have combat experience, with the exception of one — Ser Criston Cole (Fabien Frankel).

Meanwhile, Alicent Hightower (Emily Carey) and King Viserys privately have a candid discussion about Rhaenyra. As a concerned father, he’s having trouble getting Rhaenyra to open up to him, and Alicent empathizes as a child who also lost her mother that Rhaenyra’s grief will take some time.  She encourages Viserys to talk to Rhaenyra.  Viserys tells Alicent to keep their conversations private as he feels Rhaenyra wouldn’t understand. Alicent agrees.

Back in the Sept, Alicent teaches Rhaenyra how to pray. This is possibly her way of breaking down the walls Rhaenyra has created since her mother’s passing. Alicent also encourages Rhaenyra to talk to her. This scene reeks of dramatic irony.

King Viserys meets with Lord Corlys Velaryon and his wife Princess Rhaenys Targaryen (Eve Best). Corlys apologizes to Viserys for his behavior at the council meeting. Corlys offers an ambitious proposal to Viserys — to join houses and wed his daughter Laena Targaryen (keep in mind that she’s only 12 years old). Coryls sees this as uniting the two great Valerian houses. The Valerian fleet and the Targaryen dragons bound in blood shows the realm that they mean business.

In the following scene, the Grand Maester (David Horovitch) administers maggots to Viserys to treat his debilitating skin condition. The issue of politics is still at hand, and the propagation of his family line of concern to the realm. The next day Corlys sends his daughter Laena to court Viserys. It’s a cringeworthy scene given the huge age gap between the two as well as how Laena is being forced to mate with a strange man under the order of her parents. When Laena tells Viserys that she would be pleased to join houses and give him many children, he asks if that was what her father told her to say. She pauses with a solemn look. Viserys then asks what her mother told her to say, and she replies that she wouldn’t have to bed Viserys until she turns 14.

Meanwhile, Princess Rhaenys Targaryen seated at the courtyard sees Rhaenyra and asks her if what she’s witnessing between Viserys and Laena bothers her. Rhaenyra turns the question back to her and asks if it bothers her. She replies that it does. However, Rhaenys sees the order of things. This is going back to her experience of her brother being picked over her for being on the Iron Throne and serving as king.  She is now the “Queen Who Never Was.” Rhaenys is blunt and tells Rhaenyra that inevitably her father will remarry and have a son and that son will become his heir and not her — that is the order of things.

News has come to the council that Daemon Targaryen (Matt Smith) is in Dragonstone and has stolen a dragon’s egg. He has also taken a second wife.  Now you know why the episode is titled “The Rogue Prince” (that and the fact it is titled after the book of the same name). He sends over a letter with his demands about the egg, his wife, and that she is with child and her title.  Daemon also had the audacity to invite Viserys to his wedding, which is within 2 days after the receipt of the letter.  Viserys prepares to go Dragonstone but Otto stops him and insists that he go instead because he believes it is too dangerous for a king.

The confrontation begins at Dragonstone between Daemon and his army and Otto and his army. These two characters despise one another, so seeing them together onscreen is always entertaining. When Daemon notices Viserys is not there, Otto says the king would never entertain such a farce. Then Daemon shifts his attention to Ser Criston Cole, purposefully getting his name wrong, but Criston then refreshes his memory by remarking that he had knocked him off his horse at the Tourney.

As things get tense and a fight is about to ensue, Rhaenyra swoops in with Syrax ready to stop all of these shenanigans. When Rhaenyra confronts Daemon and asks him about a child, we learn he was lying that his woman Mysaria of Lys (Sonoya Mizuno) is with child. Rhaenyra tells Daemon to kill her if he wants to be sole heir and be done with it. At that point he gives up the egg and walks away. In the following scene when Daemon speaks privately with Mysaria, he fails to tell her that she was part of his ploy about being his wife as well as being with child. She feels violated once again by a man with this move by Daemon, who she thought was protecting her.

Viserys is not pleased when he hears that Rhaenyra went to Dragonstone. As his only heir she could have been killed. The conversation they have in this scene is the first where they talk about the death of Queen Aemma.

In the next scene, Viserys announces that he has decided to take a new wife. He has chosen Alicent Hightower. This angers Corlys and shocks Rhaenyra. She runs off.

The final scene ends with Corlys brokering a deal with Daemon. He’s hellbent on protecting his house, at all costs.

Tune in with us every Sunday night at 9pm ET on Twitter using the hashtag #DragonsYall as we live-tweet each episode this season! Tune in to our podcast shortly after to hear our recaps too! You can catch the series House of the Dragon during the broadcast on HBO or stream it later on HBO Max.