I finished How Long Till Black Future Month by N.K Jemisin and my head is still spinning. In it, one finds a range of folklore and an astonishing array of themes that are pertinent to our society. It’s a poignant glimpse into what it means to be human in all its complexity. I was overtaken by the depth of representation. I can’t recount all the stories that made me cry or laugh or ruminate on what it means to be finally seen when you are  ‘Othered’. I am Black and gay and mentally ill and woman. Yet, I found a place within this book for all the multifaceted aspects of myself.

The multimedia narrative has been shown to have both positive and negative effects on the neurobiology of those that consume it. Whether the narrative medium is through print, video, or audio — our experiences are reflected back to us for better or for worse. Our perceptions of ourselves are transformed in the process. This is what makes How Long Till Black Future Month such an essential text for the 21st century. Its stories trace a multitude of varied experiences. I’ll discuss the ones that are important to the narrative of black people as a whole. Here are three of my favorites.

We’ll begin with a utopia that fights to maintain peace and tolerance.

The Ones Who Stay and Fight

The Ones Who Stay and Fight is a story of redemption. It a story of a city called Um-Helet. Within it, the narrator paints a picture of a society unblemished by racism and the shade of conformity. Everyone is family there, and joy is a way of life. It’s detached from this world as we know it. Yet, their denizens know of ours. What’s curious about this story is the lack of tension. When we read stories of utopias, we’re waiting for the other shoe to drop. We hold our breath as we invariably realize that things aren’t all they appear to be. In Um-Helet, the world just is that pristine. Yet, Um-Helet was not always that way. It must also work toward keeping its utopia intact, so it doesn’t go back to its original state. There is the idea that evil is a thing that can spread, and unfortunately, they must nip it in the bud before it does.

We see a girl on the edge of hatred, and a man (her father) who has been killed by enforcers of Um-Helet. I won’t ruin the ending for you. Yet even the opening of this scene leads the reader to the possibility of redemption. It’s a story that dares us to open ourselves to the possibility of equality and tolerance in a real world that doesn’t show either. The Ones Who Stay and Fight is important because it gives us hope. Maybe it is possible for a society to live in peace. Maybe it starts with us.

The next story teaches one how to look to the past, to give purpose to our future. It’s a tale of the birthing of dreams, and the hope that keeps them alive.

Red Dirt Witch blends African-American and European folklore to reimagine the Civil Rights Era in the south. In it, children are taken and made slaves by the evil “White People” (not what you think). A family with the gift of prophetic dreams works against them.  Ultimately it’s a story about the birthing of a dream that the matriarch of the family continues to have. This dream involves the liberation and desegregation of black and brown people, as the below quote demonstrates. The daughter of the Matriarch says: 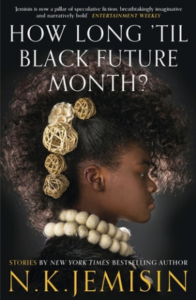 “But Momma, I saw it in the dream. People marching! Big ol redneck bulls, standing up like men, holding dogs and billy clubs. Blood everywhere…At the end of it though Momma, at the end…I saw white children and black children sitting by each other in school. I was yellow and brown children there too! Black people at the front of a bus! Momma… I saw a black man in a big White House”.

One of the biggest things I enjoyed about this story is the African-American folkloric aspects. Anyone that’s old enough in the Black community knows how important prophetic dreams are for people in Black homes. There are also hints of spiritual practices from Conjure (an African-American system of magic brought over from Africa). We find the matriarch of the family growing certain herbs to keep the White People away. She lays brick dust before their arrival to keep them out of their home.

The story ends on a sad note, but the story is reminiscent of the dreams that we invariably have for their children and the fulfillment of those dreams. It reminds me of how Moses was capable of seeing the Promised Land — but died before he could actually experience it. In this way, the story causes you to reflect on what you’ve been given and the sacrifices your ancestors have made to get you where you are. It makes you a better person, as you remember where you came from.

Our next story turns traditionalism on its head. It’s a stunning narrative that opens one up to the possibility of nonconformity. It demonstrates how important diversity is in the world around us.

The Brides of Heaven

The Brides of Heaven is set on another planet. A community of Muslim women is tasked with rebuilding a society after landing on it. They struggle to make this place home. In the meantime, they face many obstacles, including the lack of men in their colony. Jemisin explains that these women crash-landed on this planet, and even though men were set to land with them, the male unit malfunctioned. This left the women to fend for themselves. The few children they had left died shortly after, and this tragedy reverberates throughout the colony.

This sets the stage for a ‘madwoman’ named Dihya to attempt to contaminate the colonies only source of water. The reasons for this will be shown in the story, and I can’t elaborate without giving the ending away. However, it solves the problem of a lack of a male presence in the colony in a mystical and otherworldly way.

The Brides of Heaven creates many juxtapositions against women in our society. There’s a female Imam, LGBTQIA representation amongst the ‘flock’, and the heartache of lost family and tradition. It’s a story that touches on radicalism and how far one might go to hold onto tradition. Mysticism is seen as a solution to the gender imbalance within the colony. It teaches you that God will make a way, no matter where you are, or what you struggle with.

In short, Jemisin’s work is masterful. The representation in the book includes everyone that’s been ‘Othered’ in our society. It’s an escape to another realm and should be read by every person that doesn’t feel like they belong. HLTBFM repeatedly opens the mind to what’s possible and provides an impetus for us to fight for the life that we deserve. This is undoubtedly her best work. It’s a balm to those who don’t see themselves in popular media and want to understand what’s possible in a world that holds them back. I highly recommend it and hope you have the same experience I did.

Anna is a freelance writer and journalist in the metro Detroit area. She’s been writing professionally for 7 years. She would love to speak with you. You can reach her on Twitter @TheRealSankofa, or on Facebook under the name Anna Gibson

‘The Broken Earth’ trilogy is an outstanding work of fantasy