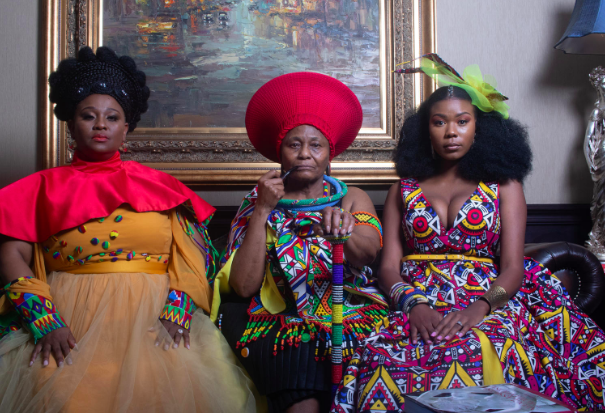 The holidays are right around the corner. We all know how stressful a normal Christmas gathering is — imagine coming home to be in a sibling’s wedding, then being the reason that it is canceled. Tumi Sello (Busi Lurayi) is the outspoken older sister who hasn’t been home in two years. But when her sister is getting married on Christmas, she takes a plane from Cape Town to Jozi to (reluctantly) join the festivities.

She is picked up by her cute friend, Khaya Manqele (Yonda Thomas), who she clearly has a past with (we will get to that). Her sister Beauty (Thando Thabethe) has the image of the perfect wedding in mind. Due to their cultures and traditions, the wedding will take about three days for each significant tradition. When she finally arrives home, Tumi is greeted by her cousin Bokang (Lethabo Bereng) and his mother Aunt Moipone (Keketso Semoko) first, but then her mother Dineo (Clementine Mosimane) loudly asks if Tumi will be coming out to greet her or what. I felt that in my soul. I swear I have heard that before. Why are they like this? Upon seeing her daughter, Ma Dineo immediately tells her not to ruin her sister’s wedding, while Khaya is given a more decent greeting. Not easy having mama issues, Tumi clearly has a better relationship with her aunts than her mom.

Sbu (Sandile Mahlangu) and her family are government-minister rich with bougie tasted and uppity attitudes. They shut down the whole Four Seasons for the private event. Mother of the groom Valencia (Charmaine Mtinta) is not exactly happy with the greeting the manager has ready for her and her family, while her husband, Vusi (Lehlohonolo Saint Seseli), doesn’t say much about her attitude. Themba (Motlatsi Mafatshe) and his wife Lydia (Swankie Mafoko) are doing their best to play the part of happy couple while being unhappy behind closed doors.

Tumi thinks that the women in their family are cursed when it comes to relationships. Their father left their mother before Beauty could walk. Beauty informs Tumi that she searched for their father, but Tumi thinks that is a bad idea, especially since all is going well with Beauty. How could she demand for more than what she is getting? She’s not interested in knowing her father. Khaya, knowing that there is something going on with Tumi, offers to make her dinner so that they can talk things out, especially why she has been avoiding him and her family for two years. Things take a quick turn when Tumi’s family finds out that she didn’t buy a portion of the gifts needed for the uMhlambiso (gifting ceremony) the next day. Her mother accuses her of ruining the wedding, which causes Tumi to back out of the wedding. She then gets drunk and sleeps with the groom’s very married brother, then gets caught the next morning by both families! Valencia refuses to have her son marry into the family.

Tumi spends time with Khaya, trying to fix her mistake while also reconnecting with him romantically. Beauty deals with her own ideas of having the perfect wedding if her father were there to walk her down the aisle. She and Tumi take a chance to find him so that all can go well, but the trip does not yield the results that they expected.

The pilot episode quickly sets up the characters, goals, and conflicts right away. Following it is easy enough. Tumi leads as the child who isn’t favored by her mother and is known as a screw up, unlike her sister who seems to be doing well as the rule abiding perfect daughter. All the drama is not so farfetched that you could not relate to the outcomes and reactions, which makes this show even better. The Twala and Sello families are different in matter of traditions that are upheld and social caste. Personally, I can see quite a few family members of my own who act the same. The stress of a wedding and elders can make any person act like a Tumi or Beauty. Despite the few episodes, we are able to see real character growth for both sisters involved. You want to root for Tumi to get things done as well as make amends with her mother, then own her feelings toward Khaya. Beauty comes to her own realizations as well, which open up a new batch of problems that she is able to handle in her own way.

When I saw this trailer, it filled my heart with excitement. December holiday in South Africa is a big factor for family; not to mention that it is the season of weddings. This show assisted with the homesickness that I felt. However, it added to the continuous stress that I have of planning a wedding. I love every traditional aspect of it, but as you see in the show, there are quite a bit to go through. Busi Lurayi handles the non-traditional aspect of her role in a way that isn’t off-putting. She’s not the jealous sister but the hurt daughter who wears the pain as a guard. Busi is joined by a cast that has been around for decades and proudly shows off their unique culture. Now I have a reference for my friends when they ask what happens at a Tswana wedding. Netflix’s partnership with South African creators is yielding fantastic shows and movies that you can enjoy over and over again.

How To Ruin Christmas is set to premiere on Netflix December 16th.