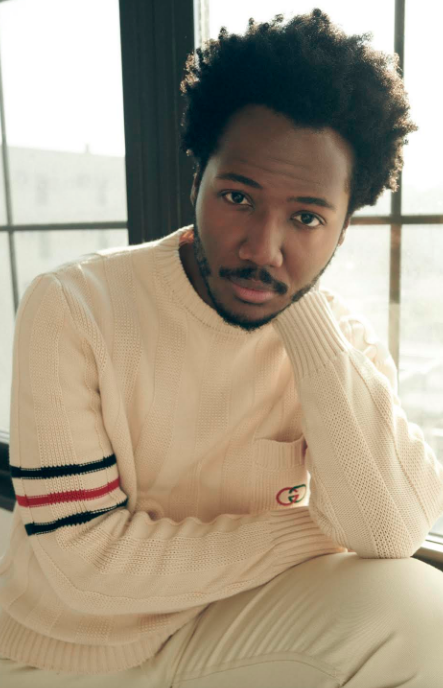 The Good Lord Bird is based on a book written by James McBride and is a satirical telling of the story of abolitionist John Brown and his band of revolutionaries as told through the viewpoint of an enslaved boy Brown calls “Onion.” I spoke with NYC-based actor Hubert Point-Du Jour, who plays series regular Bob.

How did your theater experience prepare you for your first series regular role on a premium television network?

Well, I was lucky. James McBride’s writing is what I would consider “heightened language,” which to me I would define as anything that is out of normal “every day speaking” and also that might contain poetic elements to it. The series retained so much of that language. My theater background, particularly the Shakespeare training, really helped me understand how to zoom in to those writing aspects and fine-tune my acting to that kind of writing and to embrace that writing, not to shy away from it.

Do you know how the book The Good Lord Bird was brought to Showtime and made into a limited series?

Someone pitched the idea to Ethan Hawke when he was on set for a different project and said, “Hey, I’m reading this book called The Good Lord Bird, and John Brown is a character in the book and you should play him one day.” That kinda like put a seed in his mind, and he eventually decided he wanted  to produce it. At first he was thinking about the story for film. Ethan’s wife said, “What about a mini series?” Ethan was like, “Well, yeah. Right!” Then he partnered with Blumhouse, they brought it to Showtime, and the rest is history.

I love the vocal rhythms of this world. How were you able to feel into the language of The Good Lord Bird?

I think you trust the writing. James McBride’s writing, it was just so good and it translated beautifully into the screenplay. You mentioned rhythm. The rhythm, the music of the script was so apparent.  I just had to trust it. Lean into it. Trusting the script was key.

How influential was McBride’s source material on the screenplay, written by Ethan Hawke and Mark Richard?

Ethan and Mark were the main writers, and there were some really talented writers who co-wrote the episodes. But I believe James McBride had some say. So I, like, get on set, it’s my first day, and there is James McBride. He was there on my first day of shooting. When I got a brief moment to chat with him, he kinda downplayed his role. He was engaged. I didn’t see him on set much after that but, from what I hear, he was watching the  playbacks, the dailies, and giving comments. I think he was modest  about it.  His daughter, Azure McBride, helped make that transition from book to screenplay as well, and she was on set a lot during the second half of the filming.

In Episode 1, “Meet the Lord,” Bob’s first scene in the wagon was fire — a perfect example of how Black folks have practiced acts of resistance, even during enslavement. How does it feel to be able to humanize Bob and play this role where the script incorporates nuance and satire into the narrative, particularly in our current racial climate?

It felt really, really good.  I felt really lucky to embrace the opportunity to play a man who is enslaved and who is able to show so many dimensions. Also to have James McBride’s original book as source material, which pulls off humor, was key. When writing the screenplay, Ethan Hawk, Mark Richard, and the writing team translated the majority of the book into the screenplay, which was great. You know, I’ve heard Ethan Hawk say of James’s writing, “James pulls off this magic trick…which is, he just makes it, so funny.” To be able to have humor built in there as well, was a huge draw.

At the same time, for me as an actor, there’s a challenge. How am I going to convey this humor?  Because, I was laughing out loud reading the book, and the screenplay! It felt really great, and also, as you brought up today, this particular time period [of the show] is still, in so many ways, resonating today. Working on the series was meaningful. Historical fiction, based on facts blended with satire, is a great tool for us to look back at these uncomfortable periods. What better way to approach these hard issues than do it than in a way that helps you into that world with humor. That’s such a good way to open that door to people to not feel apprehensive to talk about race and gender. James McBride, Ethan, Mark and the entire writing team were just fantastic.

Going back to Episode 1, your scene with the legendary actor Keith David brought a huge smile to my face and made me laugh out loud.  How much fun did you have working with a living legend?

It’s one of my favorite scenes in that episode. I couldn’t wait to shoot that scene. Keith wasn’t there when we did the initial table read with the whole cast before we started shooting Episode 1. I was so looking forward to actually reading it with him because when we read the scene at the table read, people were just dying laughing. So when we got on set with Keith David, I was like, let’s go, me and Keith David, let’s knock this out! I cannot wait because he’s a legend, you know. Shooting it was a blast. And Daveed Diggs from Hamilton was in Episode 3. I didn’t get to work with him on that episode, but I did go to set to watch him film, so that was really great.

A great deal of the series was shot in Powhatan, Virginia, near Richmond. That soil holds so many untold stories of enslaved Africans. Even though there’s humor in The Good Lord Bird, calling in and embodying the ancestors can leave heavy imprints on an actor. Did you have any rituals or strategies to shake off character energy after long days of shooting in the imagined antebellum south?

If I had anything that could be considered a ritual in this regard, it would probably be music. I immerse myself in music all the time, in a very active way particularly when I’m working. Taking time to turn the phone off, close the laptop, and just sit down and listen to music. I was drawn to artists like John Coltrane during this moment. At the time I didn’t really know why, but his music, it’s so spiritual, so deep, and I think I needed that depth of music during this time.

John Brown may have been the original “OG white savior,” and his ego led to a failure that caused chaos that made things worse for the enslaved Africans. What lessons do you think we can all learn from this story today?

The story resonates with what we’re experiencing today in so many different ways. It makes me think about white allyship and really just working together to address these issues of systemic racism. Like you said, John Brown was one of those original “OG” white saviors. But you know, when we talk about white saviors on film, it’s not in a positive light. The “white savior” is usually a fictional character. John Brown was an actual guy. For me that’s one of the big differences. Another is James McBride doesn’t even center the story around John Brown. The world is viewed from Onion’s perspective, a Black boy, as written by a Black man. I hope the show can inspire conversations about working together, Black, white, and all ethnicities. Because John Brown was one of those first white folks who, like, back then was willing to literally put his life on the line to end slavery.

Ethan Hawke and Mark Richard co-wrote the film Boyhood, an award winning film which took place over 10 years. Now that you’re in the “family,” will we get an opportunity to see you working with this team again in the future?

There might be.  Ethan and I had a great relationship working on the project and we’ve been discussing other projects so stay tuned. There will be something!

From NYU to Law & Order to the Public Theater to The Good Lord Bird on Showtime,  thank you for sharing your talent with us in living rooms all over the world.

That means so much to me to be able to track the progression, that journey of mine. Thank you so much for saying that, for following my work, and giving me the time to talk about The Good Lord Bird.

The Good Lord Bird reminds this writer that working together in a multi-racial America is what we have always done. In the Abolitionist movement, it’s always been us working together to create change. I really do like this series because it reflects the humanity in all of us.