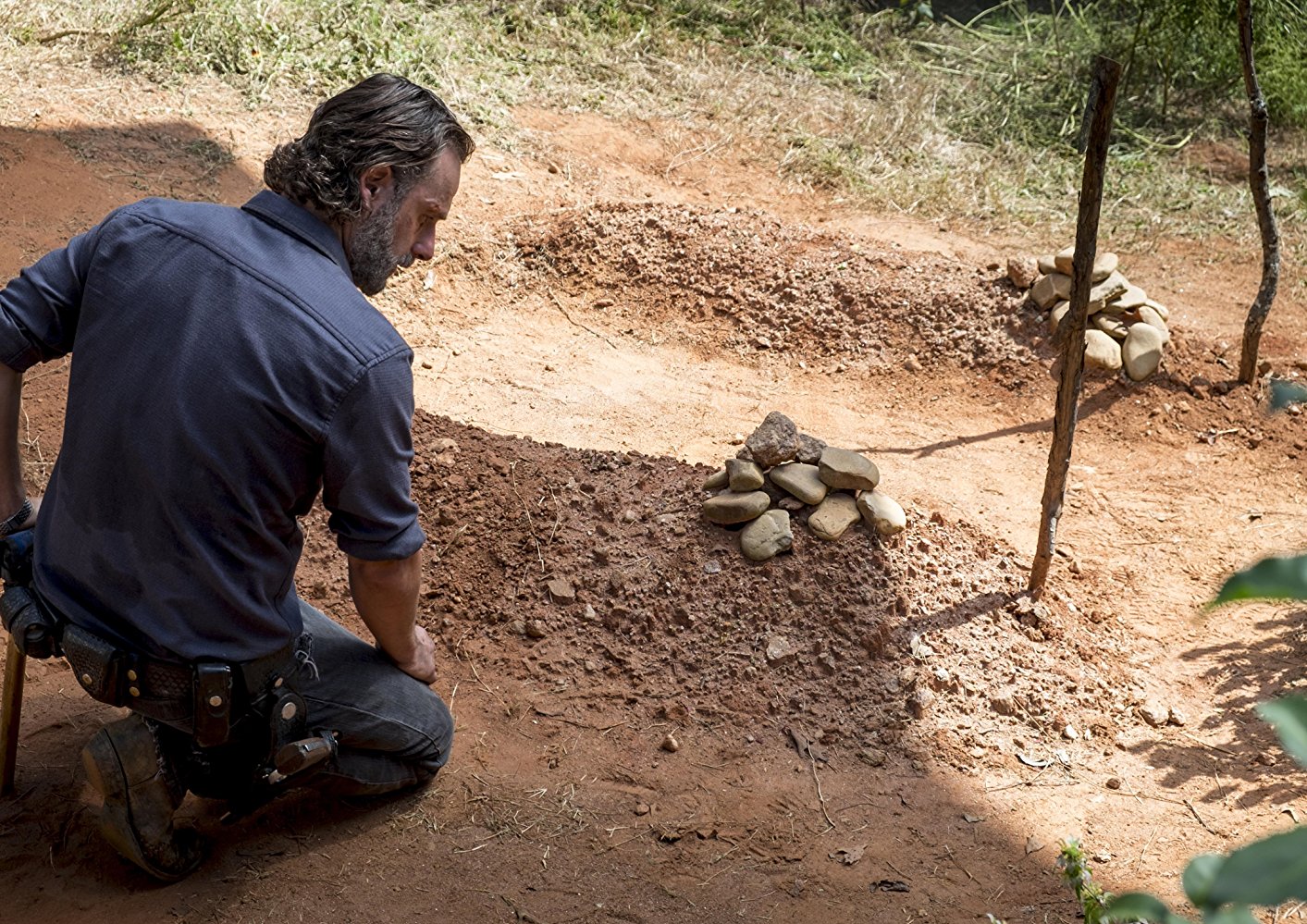 “The Key” is the title for this latest episode of The Walking Dead and the only thing it seemed to unlock was a portal into the upside down, because nothing made sense.

Let’s get into this review, shall we?

Dwight is back at the Sanctuary in his room looking like he would literally rather be anywhere else and let’s be honest, we all wish the same thing. Negan arrives and welcomes him back and comments on Dwight’s “close call” with the Alexandrians. Dwight tells him the same story he fed to the Saviors when they found him — that he was ambushed, got shot and headed towards Hilltop because of the blockade. Next, we see Simon and some of the others covering weapons in walker blood and as Negan gloats about what he believes to be a genius plan, it’s clear from Simon’s expression that he thinks it’s anything but.

Before group heads out Simon explains Negan’s plan; No headshots, just flesh wounds and let the injured turn but don’t kill them. Ummm how does this make sense? Let’s walk through this plan, shall we? I don’t know 10 people who become walkers, before at least 5 of them are killed they bite or scratch those who were not originally hurt by the Saviors, that’s at the very least 2 people who will be infected and therefore will die. That’s 12 people who will not only be dead, but they won’t be able to contribute to the groups, which is the very reason ALL of this mess is happening in the first place. Negan NEEDS people to do his work for him, but that’s to be expected from a guy who comes up with such an asinine idea and calls it genius. 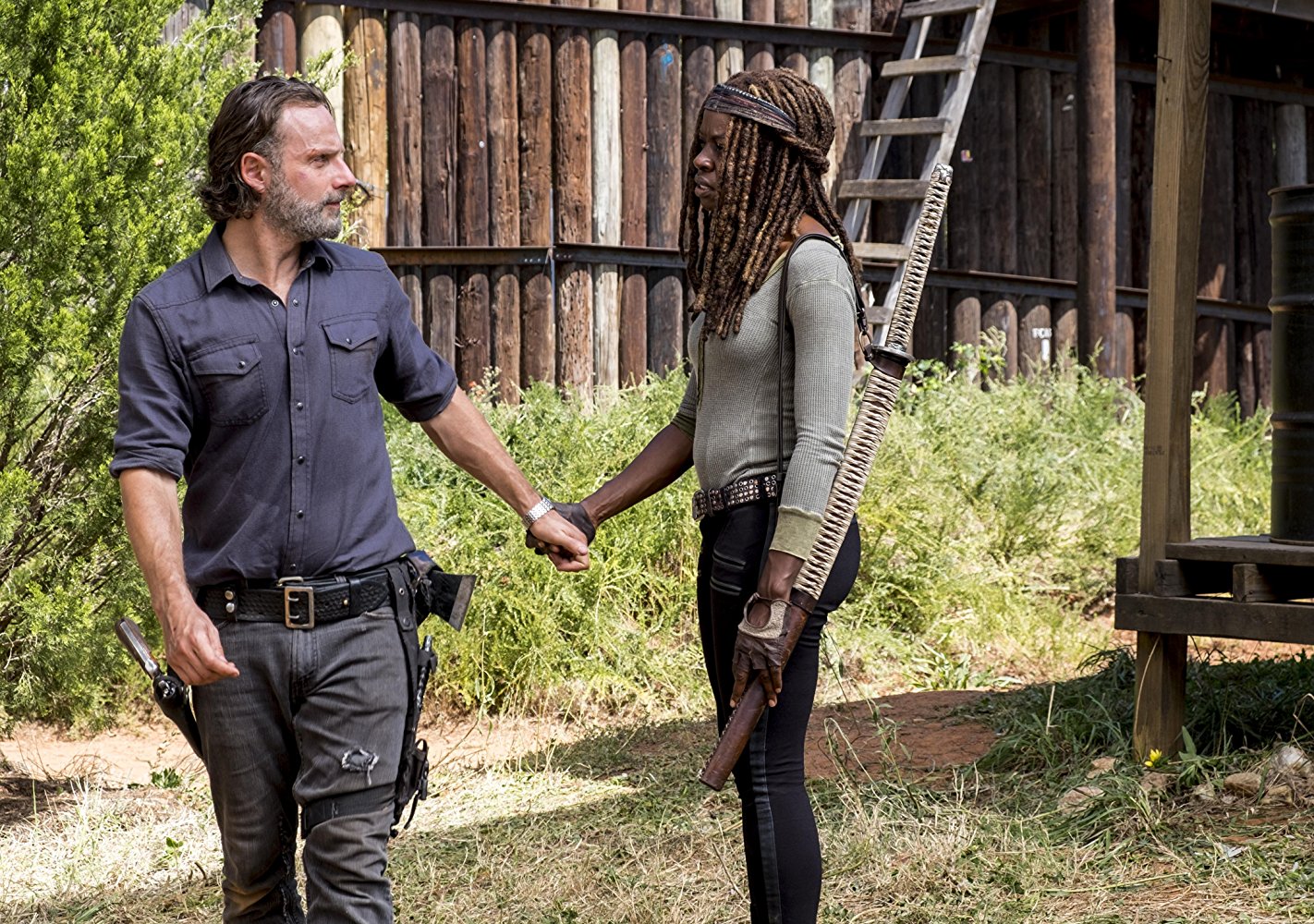 At Hilltop Rick holds Judith before visiting Glenn and Abraham’s graves. As he kneels and thinks of everything that has occurred since they died Daryl approaches and tells Rick that he thinks about the people who are gone and those who remain and states “It ain’t right, it ain’t fair” and to that I say “You dang right, it ain’t right or fair Daryl. Almost everything that has happened can be linked to you.”

From the beginning of season 6, Daryl has been making one irrational decision after the other. He’s made so many mistakes and admitting that it was because of him not caring about the consequences doesn’t absolve him or erase what has happened. Glenn, Abraham, Sasha, Denise, Olivia and everyone who had died in this “war” are dead because he never thinks about what will happen after he goes off half-cocked with a half-baked scheme.

Rick thanks Daryl for getting back to Hilltop and it took me a minute to realize he was thanking him for getting Judith to safety, then I got sad because I remembered that Judith is the only child he has left now and I got pissed all over again. Maggie and Rosita watch from the gate as Rick drives away from Hilltop, and even though they express concern over how he and Michonne will comeback from losing Carl. They both know the family will continue to move forward because they have no choice, and giving up while Negan is still alive is not an option. Hearing this only confused me more because it flies in the face of everything the writers have been pushing at viewers with Carl wanting Rick to surrender to Negan’s BS. How could they have characters like Maggie, Rosita, Carol, Dwight and even Ezekiel express that Negan is evil incarnate and must therefore die, BUT use Carl to basically guilt Rick into giving into their oppressor?

While Simon reveals his misgivings about Negan to Dwight, Michonne and Rosita drive up to the gates of Hilltop in a never before seen SUV. Maggie meets them and is handed a letter that requests her people fill empty crates with food in exchange for receiving “the key to their future”.

Michonne says it couldn’t be the Saviors because they wouldn’t be so polite and says that it may be people trying to help them. Because of the food shortage at Hilltop Maggie agrees to go with Michonne and Rosita to meet with and find out who these new players are. Next, we see Rick perched on the top of his van waiting for Negan and his minions. As they drive past Rick hesitates to signal the others and instead gets in the car and pursues them ON HIS OWN.

With every successive episode in this season, I become convinced that the writers are purposely weakening Rick and enjoy seeing him tormented by a sadistic bastard like Negan. I truly believe it is their intention to replace Rick and what happens after he leaves the Hilltop cemented that for me — because that ish was pure foolery and nonsense.

Y’all Rick Grimes, the man who has ALWAYS stuck to his plans, decides at the most crucial point in this entire season do say “nope, I’m going to make the stupidest decision of my life by destroying my car to get at Negan.” Seeing Negan’s car on its side — Rick takes a machine gun and shoots at the exposed gas tank and SOMEHOW FREAKIN MISSES.

Negan gets out of the car and Rick MISSES HIM.

As Negan runs into a building RICK STILL MISSES.

The next 30 minutes of The Walking Dead turned into an episode from Looney Toones. Rick became Wyle E. Coyote and Negan was The Road Runner. I have never laughed so much out of frustration and disbelief, I honestly couldn’t believe what I was seeing. I’m not even going to get into what happens because it was a joke and not even the funny kind and isn’t worth our time.

Maggie, Michonne and the others meet up with the owners of the crates and find a woman who like Gregory still finds it pertinent to wear blazers and slacks in the apocalypse, but like Deanna seems to actually serves a purpose. She tells them that in order for everyone to survive, plans have to be made and followed so she can help. Maggie decides to take suited Deanna and her people back to Hilltop until she figures out what the next step should be.

Michonne tells her that maybe they should take the deal, Enid comes in and tries to put her two cents in but Michonne ain’t having it and tells her to step off when Enid forgets her place. When Maggie tells Michonne that sometimes things don’t always work out, Michonne says she knows and Carl knew that.

When Maggie lets Deanna 2.0 go with some supplies, she gives Maggie a book that gives detailed instructions on how to create and build infrastructure and progressive farming. As the episode comes to an end, Michonne and Enid have a little heart-to-heart that made me feel a bit better about where they are right now as characters, but it also left me feeling a bit bereft. In that scene — and the one with Maggie and Michonne — I realized just how much TWD has changed.

These two moments have been the only times in this entire season where I felt like I was watching the old Walking Dead. For just a brief moment I saw two of my favorite characters (and actors) connect and I realized how much this show has changed and possibly for the worst. The dynamic between the main characters that fans have loved has been missing for so long that we almost don’t recognize it when it’s there.

Did that scene at the end with Simon and the Saviors bother anyone else? All that talk about exterminating an entire community of people because “they are a mistake” and are undeserving of existing came across as…nazi-ish. That kind of rhetoric is extremely dangerous in a show as popular as TWD when the people spewing that hate are the ones who get to win every fight. All this did was create a very unsettling feeling with regards to just where the narrative of The Walking Dead is going.

The Walking Dead shows Sunday on AMC at 9/8c. Here’s a sneak peek of episode nine which airs tonight “Do Not Send Us Astray”.