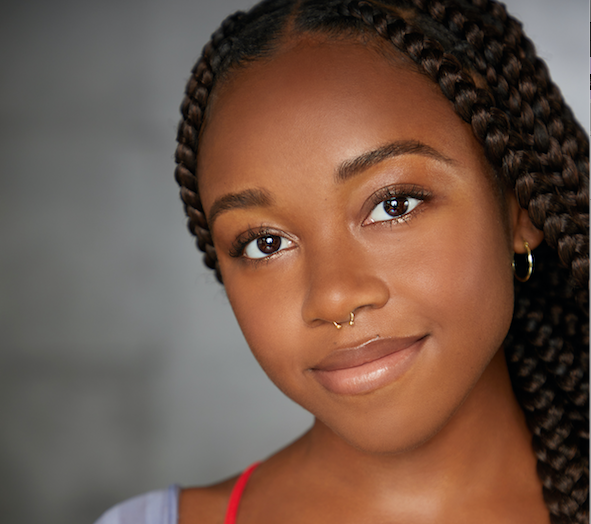 Imani Pullum put her acting chops to the test with a challenging role in the latest season of Hulu’s The Orville: New Horizons. She has burst onto the scene with a provocative, powerful, and heart-wrenching portrayal of a betrayed and confused Moclan child. Pullum has garnered rave reviews and a skyrocketing fan base with her thoughtful and sensitive approach to a subject many shows would not dare broach.

Her other credits include Disney’s Broadway touring production of The Lion King (Young Nala) and Nickelodeon’s reboot of All That. However, her poise, skill, and emotional depth present her as well beyond a well-trained 16, the age at which she began filming for Orville.

BGN recently had a video chat with Pullum about how she began acting, her desire for people to feel represented, and what she sees herself doing next.

How did you get into acting?

I started acting when I was four years old. I got my start doing commercials and I only worked commercials for my early childhood. Then I started focusing on dance more, and I danced for years. While I was dancing, my aunt sent me an audition for The Lion King. There was an open call, so I went to it. To my surprise, I booked it. I left dance and did the tour. When I came back I decided that acting is for me, so I’m gonna fully dive into that. I got a new agent, so when I was 13 I started doing more film and television. It’s been great from there.

Tell us about the character you played on The Orville.

I play a character named Topa. Topa has a really interesting story. She’s a Moclan, and the Moclan species is all male. Technically, they’re not really all male because sometimes females are born into the species. Topa is one of those females. But they force females to have gender reassignment surgery [at birth]. Topa’s gender was changed to male. She figures that out. She spends a lot of time discovering herself and her identity. It was such a fun character to play, and I’m so excited that she’s able to be herself and be happy.

That’s a heavy topic. Did you feel a sense of responsibility for this role in particular?

I really did. I tried not to put too much pressure on myself to make sure that I played Topa to the best of my abilities, but at the same time, that’s all that I ever want to do is make people feel represented. I’m glad that a lot of people felt that way about Topa, and they were excited to see Topa on screen. I tried my best to make Topa as Topa-ish as possible. [Laughs.]

Next year you’ll be seen opposite Will Smith in Apple TV+’s thriller, Emancipation. What can you tell us about the role you play in the film?

I play a character named Betsy, his daughter. It’s a really good story [and] a great movie. I’m excited for when it comes out.

You’ve worked with some heavy hitters in the industry. How do you feel that’s impacted you at such a young age?

It’s been really incredible and so helpful for me because I’ve been able to see that acting is a serious career. People sometimes say otherwise and make it seem like it’s just a hobby. I’m happy with this choice that I’ve made, and I’m really following my dreams, so it’s been nice to have that representation. It’s helped me a lot knowing that I can do the same.

If you had not gone down the path of dancing and acting, what would you be doing?

That’s a good question. Sometimes my mom and I talk about this because I think I’d be a pretty good therapist. My mom was a therapist, so I listen to stuff that she’s learned as a therapist, and I think it’s so fascinating. I feel like I’d be pretty good at that if I really tried, but I’m glad I’m an actor. I prefer that more.

Do you see yourself writing, producing, directing? What’s next for you?

Maybe I want to be a director at some point. I don’t know because I really can’t predict anything that happens in my life. It’s all over the place, and I’m happy about that. I’m the kind of person who likes to try new things. Every day, I think, “Oh, this is a new thing that I literally wouldn’t have ever expected.” So who knows? Hopefully, I can direct at some point.

Pullum has firmly planted her feet as a budding but strong actor with a promising future in the business. You can watch her and the full third season of The Orville streaming on Hulu now.