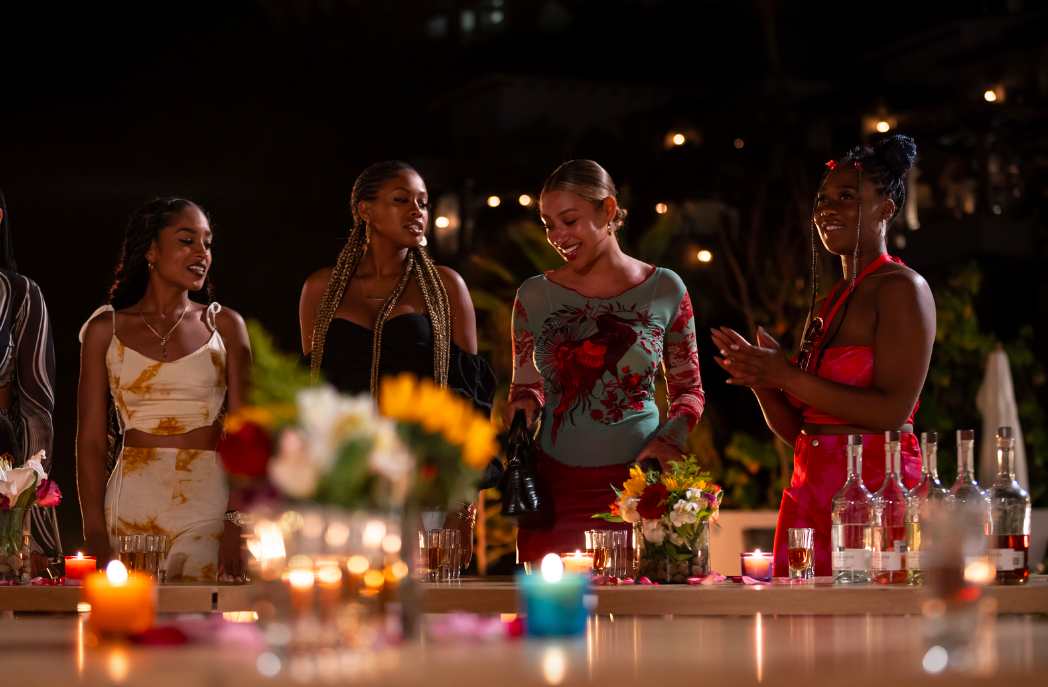 With some similarities to the BET show Baldwin Hills, audiences are treated to a taste of Los Angeles life, but this time, it has Rae’s unique flavors in the mix as mid-20s friends Amanda Scott, Briana Jones, Cheryl Des Vignes, Jerrold Smith II, Jordan Bentley, P’Jae Compton, and Tylynn Burns follow their career dreams.

BGN caught up with the show’s powerhouse team of Black women creatives, Scott, Jones, Vignes, and Burns, on Zoom to hear them share their own journeys as Black creatives in LA as well as what it means for them to work with Issa Rae.

While the show may have its fair share of relationship conflicts, bountiful shade thrown, and even a generous amount of sidebar gossip, at the heart lies rising leaders looking to uplift their community.

Amanda, you have the catchphrase, “Buy Black the block.” Can you share what inspired that catchphrase and what it means to you?

Amanda Scott: It’s about economic empowerment and financial freedom. That’s what it’s based on, and I personally feel like there are different ways you can get to that. I have found that to be my avenue, and so buying Black looks like investing and reinvesting back into historically Black neighborhoods and communities and finding gems.

It’s like a diamond in the rough — people think they’re like old neighborhoods [that] are run down [but are] really just putting [in] money and resources and other income. I just recently bought a home, and that was a really rewarding experience because it was a neighborhood that my mom grew up in. It was the first house that my grandparents bought when they moved from Mississippi. So, it was just a very full-circle moment for me. “Buying Black the block” just represents Black people really getting a leg up and taking back what we deserve.

Briana, what are some struggles that you’ve experienced as you try to transition from the healthcare field to running your own body butter line?

Briana Jones: Honestly, the hardest thing is just putting yourself out there. For me personally, it was nerve-wracking to put my ideas out there while knowing my business represents me. So, having to overcome that initial fear was probably the hardest thing.

Cheryl, why is it important for you to specifically offer fashion guidance, life guidance, etc. to women of color in LA?

Cheryl Des Vignes: For me, it’s just really important because growing up, I didn’t really see any people who look like me trying to be fashion designers or creative people. To be that voice and give guidance to the younger generation is very important. They can get it from social media, but to get it from people who look like them and sound like them, I feel like it’s just amazing. It’s something that I love to do often because giving back, that’s how you receive your blessings as well.

Tylynn, House Party Creative is for and by Black creatives. What inspired you to create it?

Tylynn Burns: I was craving Black people who are like-minded, who are not like-minded, who are doing really cool things in the city or want to discover how to do cool things in the city. So I wanted to bridge the gap between rising creative minds and people who are already established in the industry. Also, I just love throwing parties and love throwing events. I kind of merged those passions.

I throw events that are our playground for the Black community here in LA. I’ve been operating for about three years now, and I think it’s scaled and transformed into something bigger than I even imagined when I actually started it. But, yeah, the core of it is just bringing Black and Brown people together to have a good time.

What does it mean to have the opportunity to work with Issa Rae?

Jones: I feel safe with Issa as executive producer. It just gives me a sense of security and relief, to be honest, because this is scary to put our lives out there and open ourselves up to judgment. But knowing that Issa Rae is the front of that is definitely comforting.

Des Vignes: It definitely feels surreal. I still don’t believe it sometimes, like wow, I’m really on a show produced by Issa Rae, who is just legendary for LA, showcasing our neighborhood Black businesses, and it’s really important.

Burns: For me, it’s incredible to witness her live in her words. She always says how she networks across and networks up. I think most people who look at shows like this, they want to fill it with people who are already kind of established and well known and have a lot of flowing work. She really put her trust in a group of friends who are still figuring it out. We’re not famous. We don’t have money. So, it’s really cool that we can show that other side of LA adults grinding. I appreciate her for the opportunity.

Scott: Issa Rae represents herself, right? Like, she’s very authentic. Even her web series, like Awkward Black Girl — standing in that. And then she has just put on so much for the city that she’s raising and [promoting]. And I’m inspired day-to-day by the way that she pulls people up, other actors on her show, her showrunners. She’s enabled them to have so many other opportunities. I am honored that she chose me and this group of friends to represent the real, authentic life of LA.