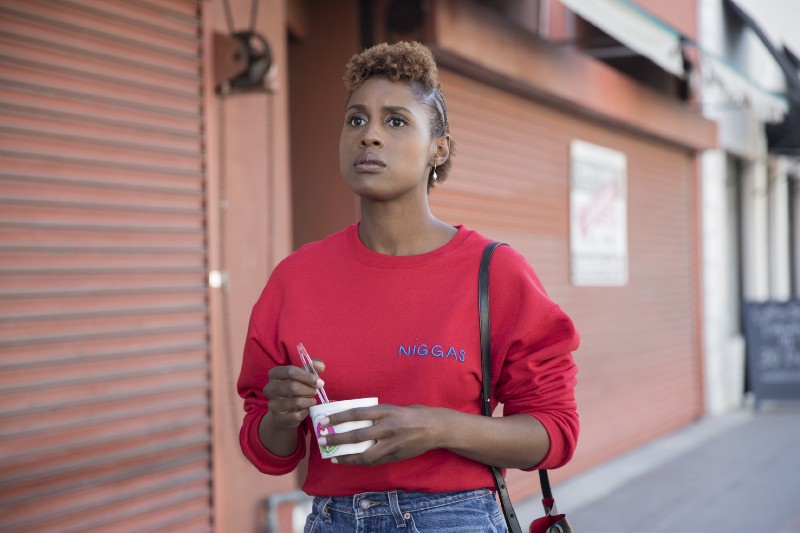 Can Issa come back from her crushing all-out fall out with Lawrence? Will Molly stay true to her word and kick Dro to the curb? Can you believe it’s all ending so soon?! Here’s everything that went down on Insecure Season 2 Finale, Episode 8, “Hella Perspective”:

Following her fallout with Lawrence (Jay Ellis), Issa finds herself taking a stroll in her neighborhood and peeps all the gentrification going on marked by various shops up for rent and a lady calling the place “I-Wood.” Barf.

Meanwhile, “30 Days With Lawrence” sees Lawrence doing a run with his co-workers and Aparna (Jasmine Kaur) at his side. As he runs, however, he sees Issa and Molly (Yvonne Orji) on the sidelines.

Back at his apartment, Lawrence makes a dinner for Aparna, who tells him she couldn’t have done the race without him. They start talking about joining the app team at work before having sex. Later at dinner, Aparna brings up what she’s been hearing at work regarding the project and the conversation turns to her sexual escapades with their co-worker, Colin, who eats crickets. Aparna brushes it off, saying Colin means nothing, and even chides Lawrence for being jealous. Again, he glances off to the side and sees Molly.

At work, he sees Aparna talking to Colin and when he gets home to direct Chad (Neil Brown Jr.) and Derek (Wade Allain-Marcus) on mounting his TV, Lawrence brings it up to his boys. Lawrence mentions Aparna slept with Colin, and they tell him to shut it down, with Chad saying Aparna having an ex for a friend is “too many d—ks around for no reason.” All three dudes then catch the latest episode of Due North.

While driving, Lawrence is talking to Aparna, but she seems distracted, laughing at something on her phone. He tells her that Colin can’t be that funny, and she immediately gets annoyed saying she was talking to her sister. When she questions Lawrence about it, he claims it’s not a bother to him before the two have a back and forth where he tells her he doesn’t like liars. Aparna tells Lawrence she’s over it and wants out of the car and when he tells her he just doesn’t want to be in a messy situation, Issa calls, prompting Aparna to hop out the car even faster.

Moving on to “30 Days With Molly,” we go back to Molly and Issa on the sideline at the marathon. She mentions that Quentin (Lil Rel Howery) is coming into town and she’s looking to take him to dinner but keep it completely casual because he’s “not her type.”

Fast-forward, Molly is at an interview at another firm and they seem to love her. Jump to her dinner with Quentin, he’s being very supportive of her decision to move on from their current firm. Molly glances over and sees Lawrence on his date with Aparna, before Quentin pays her a compliment. He offers her a dinner when she comes to Chicago.

At therapy, Molly tells the therapist Quentin isn’t the guy she should be with, and her therapist tells her to think about “could” and not the “should.” She declares to be open to the idea, but as she schedules her appointment, Dro (Sarunas J. Jackson) texts “I miss you.” Damn.

In Chicago, Quentin and Molly go over some paperwork at her place and the two share a celebratory drink. Molly goes all in and initiates sex with Quentin. Hey, now!!

In L.A., Molly has a pow-wow with Issa and Kelli (Natasha Rothwell) about Quentin and interviewing for new jobs. They go through the pros and cons of working with the black and white firms, but Issa tells Molly to follow the money before tuning in to Due North.

At work, Molly is told that it’s known she’s looking for work elsewhere and as such, she’s being acknowledged with the “Rising Star” award as well as being featured on the website. #NotImpressed.

Moments later, she’s seen in bed having done the deed with someone (who’s in the shower) picking up Issa’s call.

“30 Days with Issa” sees Issa back at the marathon and Kelli breaks down that she got her period while on the run. Tiffany (Amanda Seales), Derek, Molly and Issa all support her and Tiffany and Derek break the news they’re pregnant (thanks to the winedown & weed at Issa’s).

As they break the news, Issa sees Lawrence and Aparna kissing at the finish line. Tiffany goes around the group naming accomplishments and when she’s stuck on having something nice to say about Issa, Issa blurts out she’s moving.

Pushing forward, Issa and Frieda (Lisa Joyce) are holding We Got Y’all sessions for Latino students at the office. Though their boss is happy at the “extra” sessions, she questions the need for them. Ultimately, it comes out that Vice Principal Gaines (A. Russell Andrews) didn’t want to serve the Latino students, with Issa taking full responsibility (including omitting the resistance in her reports). Issa’s boss tells her their segregated sessions can cause a lawsuit and says she’s super disappointed. She also makes mention of rethinking Issa’s position out in the field.

Back at Issa’s, the three chicks watch a new episode of Due North and afterward, Issa asks her friends to help her pack since she has to move. They all remind Issa that she can’t afford to live on her own and offer up advice as best as they could.

At We Got Y’all, it’s announced Freida got the Director of Student Outreach position, to the dismay of everyone but Issa, who expresses her congratulations and offers her a drink.

Issa throws a yard sale hoping to make some extra cash on her belongings as she can’t afford any place. Neighbor Bae comes outside to tell Issa he’ll miss her as she moves and when a girl asks for the price of the couch, Issa finds herself back in the apartment staring at it. She calls Lawrence and tells him she’s moving, she’s got his belongings, and tells him he deserves the couch. She gives him a time to come by to pick things up.

On her ride to back to the Dunes to do a walk through and drop off her keys, Ahmal (Jean Elie)  gives the ground rules for living with him. Issa takes her final stroll into her apartment complex and sees the new white tenants enjoying the pool.

She steps into the apartment and sees Lawrence there. He tells her he didn’t like the way they ended things and he feels like he’s messing everything up. Issa makes a joke about it and the two laugh.She tells him she can’t afford the rent and it’s one of the reasons she’s leaving. Lawrence apologizes for shutting down during the course of their relationship and not being who he expected to be as her boyfriend — and a person. Issa tells him she wanted to be better for him, but she didn’t know how to handle him not being better for the two of them, which is what she wanted from him.

Issa tells him cheating on him was the worst thing she could’ve ever done to him and the two become teary eyed as she tells him she still loves him. He returns the sentiment and they hug it out. Lawrence begins to leave, drops on his knees, and proposes — which leads to a flash of Issa and Lawrence married, then pregnant with their first child, and then entering the apartment with their baby. This, of course, is all Issa’s overactive imagination.

Later, Issa heads to Molly and they bring Morocco to the apartment since Issa can’t go on the trip — full on with garb, music, and food. Molly offers Issa to move in with her, but Issa says no.

Issa leaves the next morning, and Molly gets a text that makes her smile. As Issa drives away, Lawrence sends her a friend request on Facebook, which makes her smile. Molly heads to the door in lingerie and it’s Dro, waiting for her. BOOO. Issa makes her way to Daniel (Y’Lan Noel) ’s place and tells him she’s sleeping on his couch. He tells her, “I know.”

Catch a new episode of Insecure Season 3 when it returns to HBO in 2018!